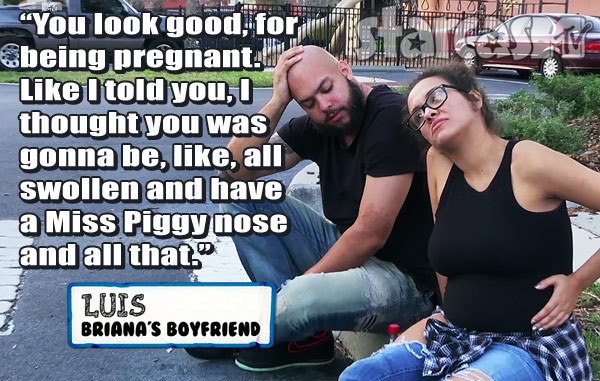 Yesterday we shared five preview clips from the upcoming Season Premiere of Teen Mom 2, and today MTV release four more! At this rate, there’s not going to be anything left that we haven’t seen!

Just like last time, I will break the clips down by mom with a brief recap of each.

* NOTE: After writing the post I realized MTV has changed how they do embedded videos from their site and they now have them set to autoplay by default. As you would imagine, the result was a cacophony with four videos all playing at the same time. We came up with a very clumsy work around — just click the button below each preview to play the clip. Unfortunately, this means we will probably not be doing a lot with MTV videos in the foreseeable future, unless they post them on Youtube or Facebook like they did with Leah’s clip below. Unfortunately, I don’t think the full-screen option works. I will include links at the bottom of the post for the ones hosted on MTV.com.


“Jenelle and David are moving into a new home, but reach their boiling point when things go left.”

Jenelle and David let the stress of moving get the better of them when they are unable to get the keys to their new house and are forced to find a place to stay for the night. Inside voices are abandoned as Kaiser ignores the drama and keeps on Kaisering.

“Leah finds out about an unexpected breakup during this upcoming season.”

Leah talks with ex Jeremy Calvert via FaceTime and he reveals that him and Brooke Wehr have broken up. Leah, who has seriously upped her makeup game while also developing a love for candles and mirrors, seems to enjoy being able to take the high road as she advises Jeremy to stay single for a while and to avoid bringing multiple women into Addy’s life.


“Kailyn gives Jo an update on her life and how things are going with Javi, but quickly shuts down when asked about new relationships.”

“Is he embarrassed?” Kail’s friend asks

“He’s probably just, like, he doesn’t want his other hoes to know about me.” Ummmm…

Kail then gets a visit from Isaac’s dad Jo and the two discuss how well co-parenting is going with Javi. “I think the kids are handling it, overall, pretty well. As best as they can,” Kail adds. “So, I’m never getting married again.”

“What about relationships?” a producer asks.

“Oh, don’t start with that bullsh!t,” Kail snaps. “It’s such a not solid situation that I just do not want to discuss any of it on TV.”


“Instead of a baby shower, Chelsea celebrates her pregnancy in a non-traditional way.”

Cupcake twerking and Dr. Randy Houska drinking beer from a baby bottle — what else do I need to say?


“Briana and her new baby’s father sit down to discuss next steps after finding out that they’re pregnant.”

Briana and Luis have a sit down discussion as Nova cycles around the parking lot like a boss. Briana comments that she is feeling “so fat” and that she “needs to buy pregnancy jeans.”

Luis tries to be nice with his response, but kinda misses the mark. “Actually, you don’t look — you look good, for being pregnant. Like I told you, I thought you was gonna be, like, all swollen and have a Miss Piggy nose and all that.”

LINKS to previews on MTV.com: