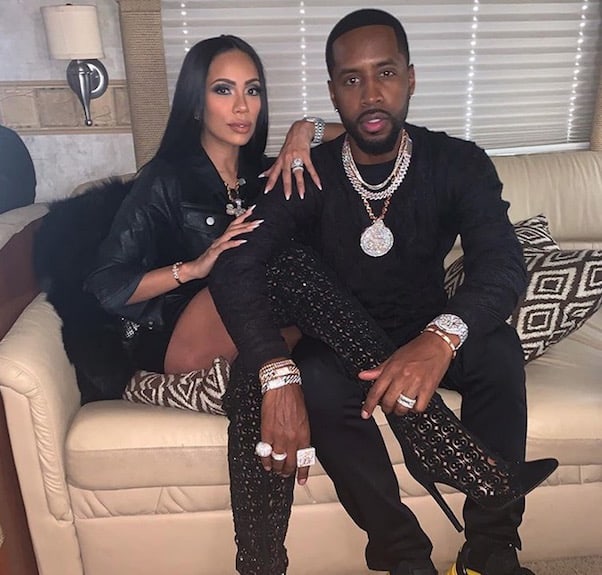 Here’s a surprise LHHNY controversy having nothing to do with affairs or baby mamas or lowkey shade or brawls of any sort. Over the past couple of weeks, it’s emerged that returning stars Safaree and Erica Mena, who are expecting a baby in a few months, are not going to vaccinate that baby after it’s born. And, when Erica faced steady criticism for her decision after sharing it in an innocuous social media post, she proceeded to double down on her stance.

The Love & Hip Hop New York power couple, whose return for the show’s tenth anniversary has been overshadowed by the entire original cast getting back together, were already expected to get a ton of screen time this year. In addition to their baby, Safaree and Erica Mena got married in a lavish October ceremony with the show’s cameras documenting every moment. Plus, Safaree’s sex toy did finally come out. It’s been a big year!

And you could tell that Erica expected to have her millions of followers on her side when she shared the following screenshot of a conversation between herself and her 11-year-old son King Conde. In the conversation, King, clearly showing the wisdom of youth, tried to convince his mother that she should in fact have her little girl and King’s little sister vaccinated. “My son King is not letting up on his reasons for why we should vaccinate the baby,” Erica captioned the exchange: 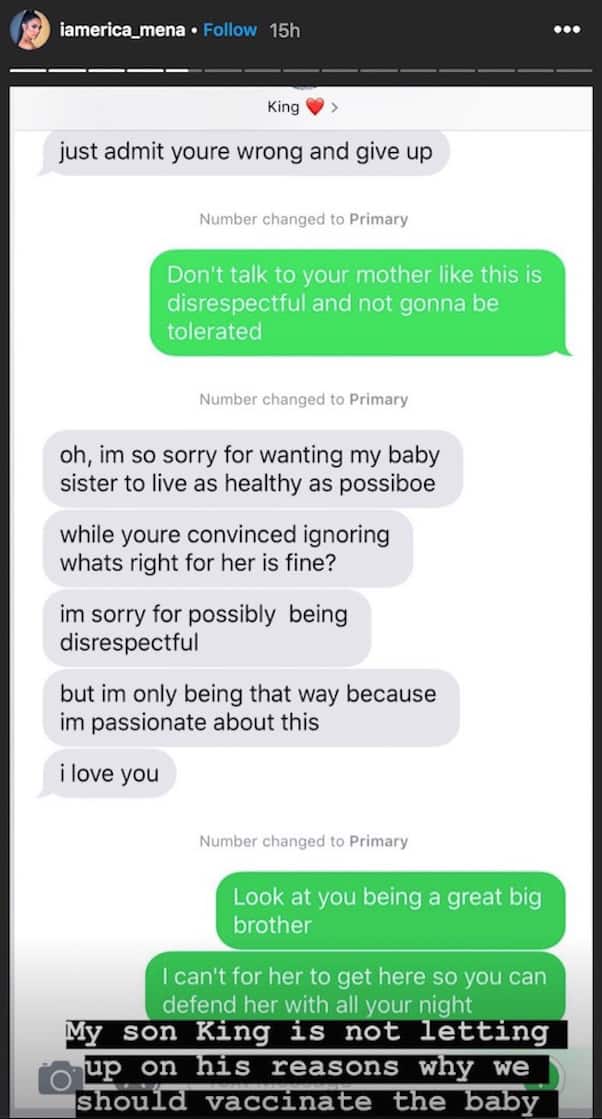 Unfortunately for Safaree and Erica Mena, the screenshot from Erica’s stories went viral and was met with a chorus of booing and disbelief. Things only got worse for the couple when, a couple of days later, Erica shared a pair of anti-vax memes: 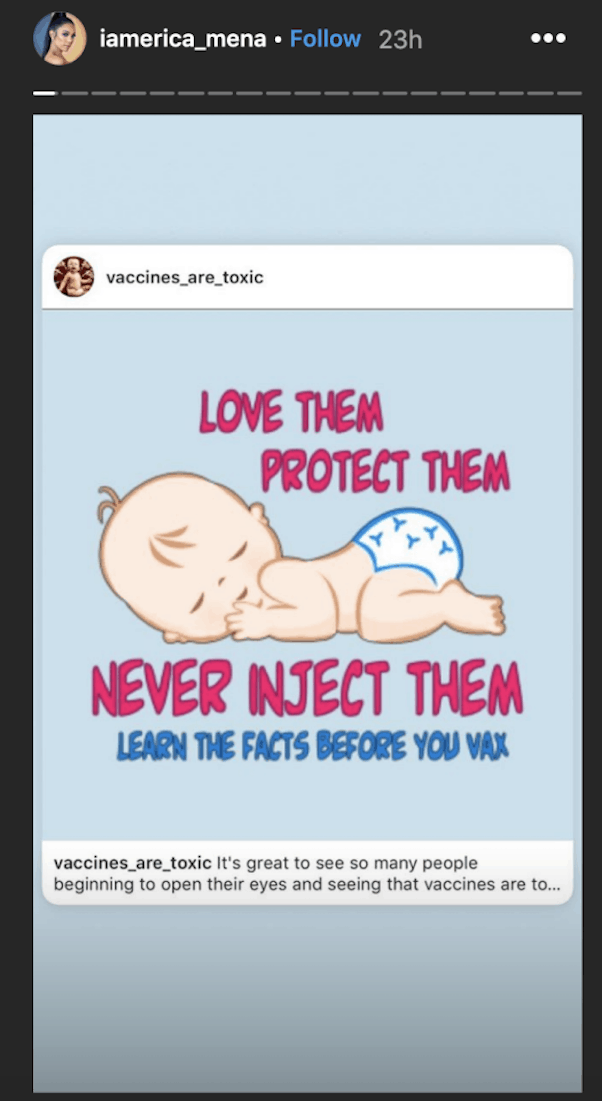 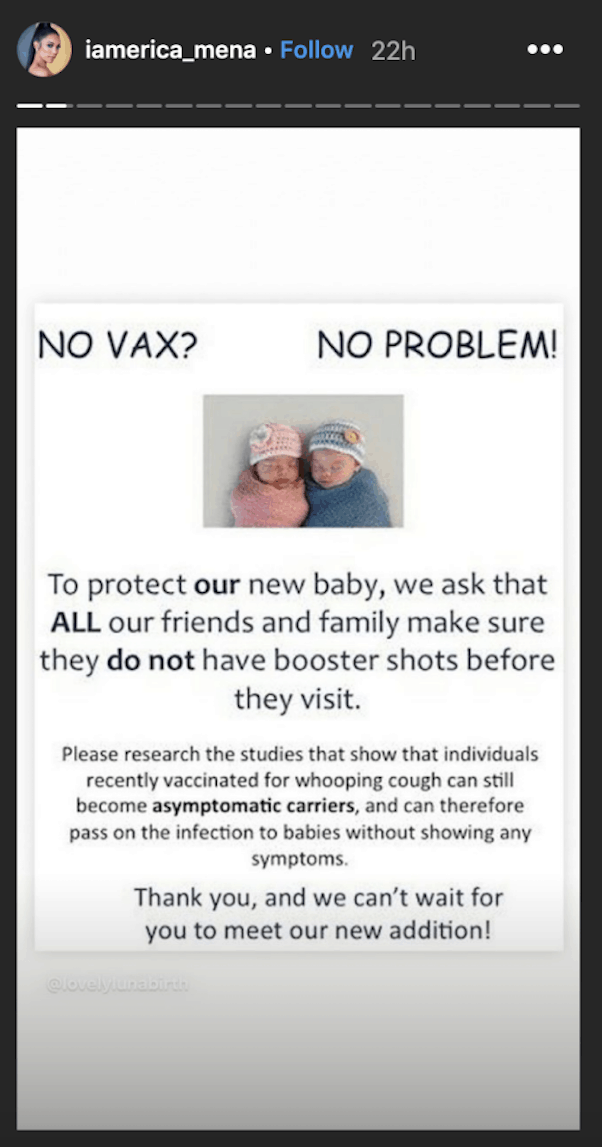 (Quick side note: that second meme doesn’t even make sense? Even if someone is an asymptomatic carrier after getting a vaccination, that’s not a reason not to have the vaccination in the first place — isn’t it all the more reason for the people afraid of asymptomatic carriers to have their kids vaccinated? Then again, it’s hardly a rarity for a meme of any kind to not make sense; back to reality…)

And the last public word Erica has shared on the topic came a couple of days after the above posts. She got called out once again after responding to a fan on Twitter, telling the fan — among other things — that the fan needed to “educate herself probably.” (It looks like Erica maybe meant to say “properly.”) Here’s that exchange: 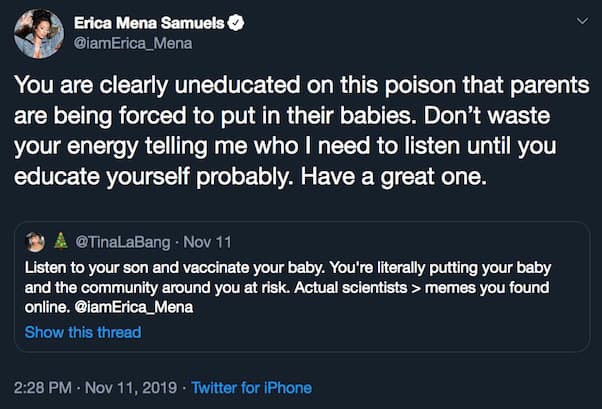 Earlier this year, the World Health Organization put anti-vaxxers on their list of the ten greatest current threats to global health. According to the WHO, vaccination “prevents 2-3 million deaths a year” — a figure that could increase by “a further 1.5 million” if only “global coverage of vaccinations improved.” Anti-vaccination beliefs persist despite mountains of scientific evidence proving their benefits. And complications from vaccines, while possible, are generally far rarer than the worst-case scenarios of the diseases those vaccines are meant to protect against in the first place.

Having said that, it looks like both Safaree and Erica Mena could use a crash course in science and anatomy:

He thinks he can work on baby number two already ?✨

Want to take a ride on Titanic II?