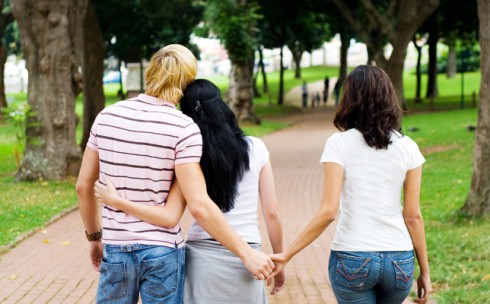 Alan is now a respected authority on non-monogamous relationships. But, openly loving more than one person was a foreign concept to even him at one point.

“I was introduced to poly at age 17 when a girlfriend my age turned me on to Robert Heinlein’s science-fiction book Stranger in a Strange Land,” Alan explained during our email correspondence. “Then she and her group of water brothers — bonded lovers as described in the book — invited me in. I realized I was born for this.”

At the time Alan was discovering the world of relationships beyond monogamy, the world was still struggling with definitions. Was it swinging? Open relationships? Or something more?

Relationships such as Alan’s didn’t have any real nomenclature until 2006 when the authoritative Oxford English Dictionary included a new word: polyamory.

The fact of having simultaneous close emotional relationships with two or more other individuals, viewed as an alternative to monogamy, esp. in regard to matters of sexual fidelity; the custom or practice of engaging in multiple sexual relationships with the knowledge and consent of all partners concerned.

From the fictional Big Love to reality shows like Sister Wives and Married and Dating,  non-monogamous relationships have been popular media topic in recent years. But, along with the publicity, there’s also been a wave of misinformation. In her article “Five Myths About Polyamory,” Jenn Wohletz helps clears up a few of the grey areas:

Basically, polyamorists are invested in loving relationships, just like monogamous people. They just share that love with more than one person.

As polyamory is a stigmatized lifestyle, it’s difficult to get a good grasp on how many people practice it. The most estimates pin the total at more than half a million polyamorous Americans.

How does polyamory work?

Gina, who was recently featured on Our America With Lisa Ling, is married to Wes. In her words, they are interwoven into the fabric that makes up each other. Just like most married couples, they share hobbies, dream of their future together and are deeply in love. They just live with three other mates, which makes up a “W.”

Alan, who edits Polyamory in the News, describes polyamory as being open to multiple romantic relationships that are characterized by honesty and complete communication. In order for this to be successful, each person in the relationship must also be honest with him or herself. For many exploring polyamory, this is the biggest challenge. Gina admits that was the case for her.

“I would have awful jealousy trips and in my mind I would wonder whether I was cut out for it,” she wrote on the group blog, Polyskeptic.

She worried that Wes would find someone better. That he would find love and she wouldn’t. That something would happen to him while he was on a late-night date. Yet, she believed the dream of enhancing the happiness in their relationship was worth coming to terms with her emotions.

“I couldn’t imagine denying him the happiness of finding someone wonderful.”

In time, Wes did meet a new partner. When Jessie came into his life, she was also intentional about coming into Gina’s. She knew and respected what was at stake. As all three got along, they became a happy triad: Wes was in relationships with both Jessie and Gina and the two women were friends.

Then, Gina met Shaun, who is married to Ginny. After developing two-fold relationships with both Shaun and Ginny, the triad officially expanded to a W. 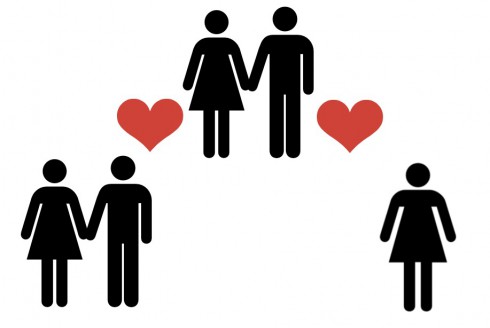 “Certainly olyamory seems quite complicated, but it doesn’t really feel that way to me,” Gina wrote. “It feels no more complicated than any slice of the day on Planet Earth.”

What issues do polyamorous relationships face?

It’s no secret the United States is slow to accept relationships that don’t meet the traditional ideal.

The most pressing issue for poly families is ensuring the safety of their children if they decide to live openly. In 1999, April Divilbliss lost custody of her daughter after discussing her polyamorous relationship on MTV. Even today, 14 years later, the Polyamory Society advises poly families with children not to talk openly with the press.

Polyamorists are also beat up on by politicians, such as Sen. Rick Santorum. Even some gay-marriage advocates are shy to promote polyamory as they don’t want to slow the progress of their own equality movement.

Unfortunately, in the image-driven entertainment industry, non-traditional relationships are generally frowned upon. As such, there are few publicly poly celebrities. 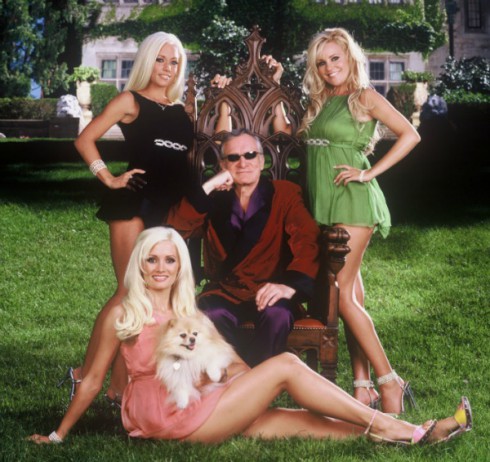 What may be the closest thing is Hugh Hefner’s past relationships with multiple women. In 2005, The Girls Next Door became a hit among two groups of viewers: Those hoping for a little bit of Playboy skin. And those who were curious to see  how three girls could possibly share one boyfriend. Although the word was never mentioned on the show, Hugh Hefner and his girlfriends were indeed practicing a form of polyamory.

“What makes their arrangement questionable, even to Holly, is the presence of two other young women in Hugh Hefner’s life: girlfriend, Bridget Marquardt and girlfriend, Kendra Wilkinson,” explained Allison Kugel in a 2006 article for PR.com. “All three women, beautifully unique in their own way, share a romantic relationship with Hugh Hefner.”

The exposure the E! show brought to the concept helped break down barriers of polyamorists all around the country. However, it also reinforced the stereotype that polyamory is superficial.

In actuality, a look into the extensive world of polyamory reveals that “superficial” is the farthest description from the truth.