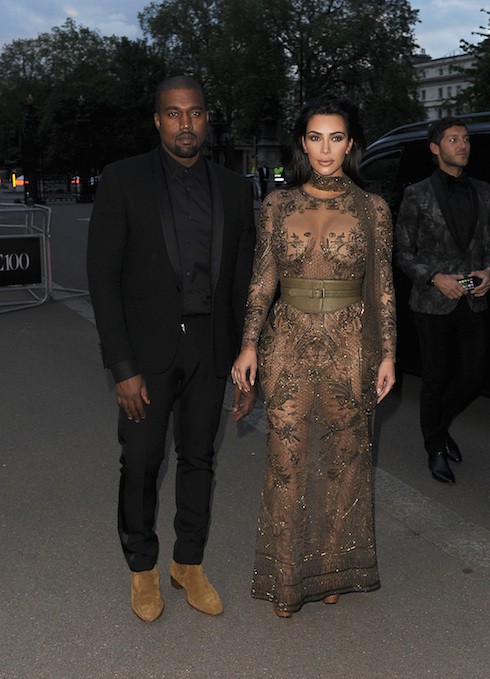 According to a since-deleted report by the Huffington Post, Kim Kardashian faked the Paris robbery for Keeping Up With The Kardashians exposure. The robbery, which apparently netted nearly $11 million in jewelry for the thieves (including a $4 million ring given to Kim by Kanye West), resulted in worldwide media coverage, especially after it was reported that Kim had been held at gunpoint in her hotel bathroom. Two men dressed as police were believed to have gained entry to the room at around three o’ clock in the morning on October 3rd; after subduing Kim, the two men let in three more thieves, and the five disappeared into the night with their loot. No arrests have been made.

However, a conflicting report has been published by Huffington Post, and claims Kim confessed to the KUWTK production crew that she faked the entire event to benefit her show. As a result of Kim’s confession–and, again, this is according to the since-deleted report–E! stopped production on KUWTK, and canceled the show shortly thereafter. For now, E! hasn’t released a statement addressing these allegations. The network’s site just published a recap of Kim and Kanye’s whirlwind week since the robbery, and Keeping Up With The Kardashians‘ official page remains very much active.

It’s not immediately clear why Kim would go to such elaborate lengths for a general reason like “ratings.” Though KUWTK is in Season 12, interest in the show remains high, and it averages approximately two million viewers per week, which places it in the upper echelon of reality TV shows. In addition, in February of 2015, the Kardashians signed a four-year, $100 million contract with E!. Kardashian fatigue may be a very real thing in the greater world of pop culture, but the family looks to stay a TV fixture for the foreseeable future.

The initial report has been taken down from HuffPo’s site (you can see the dead link here); it looks like the story’s headline was “The Alleged Stunt That Backfired And May Cost Kim Kardashian Her Career.” The story was archived by intrepid gossip blog Fameolous, and is available at this link. Here is the original report in its entirety:

Kardashian allegedly confessed to her production crew that she faked the whole thing for publicity for the already over exposed show. Upon hearing the news the network took swift action and the show that has been on air for the last 12 years may now be coming to an end.

E network released a statement recently regarding the chaos surrounding the robbery and their number 1 show confirming production has stopped saying “no decision has been made as to when production will resume,” employees of the show claim that production will never resume because the show as of now has been canceled.

Kardashian reportedly isn’t holding back details on the stunt and singing like a kid who just got caught with 80 pounds of crack, because a production assistant of the show claims that during Kim’s filmed confession which is also said to be her final appearance on the Reality TV show, implied that her famous husband Kanye West was partially at fault and that she is extremely remorseful for her actions. and riddled with guilt.

“I didn’t even know what we did was against Paris law. I just want to rewind my life. I’m not interested in any insurance money now, so people need to get over saying this is illegal.” Kim confessed in her interview.

As of now Kardashian has reportedly ditched all of her future appearances and has pretty much vanished from her social media platforms. An alleged NDA agreement with E network is said to be preventing her from revealing the details of the publicity stunt gone horribly wrong until the network airs the last episode of the hit reality TV show.

France officials are said to be outraged with the whole ordeal claiming that Kardashian’s antics on social media caused her to be “robbed” and they aren’t taking the stunt lightly and are aggressively pursuing the incident at this time to get to the bottom of what really happened.

“It was really the celebrity who was targeted, with possessions that had been seen and noticed via social media, and it was these goods that the attackers targeted,” Paris officials said Wednesday

With the new information coming to light one could understand why Kim Kardashian has decided to take a hiatus from being in the spotlight and if France is anything like Italy in the case of Amanda Knox this isn’t going to just go away for the famous reality TV star turned business mogul. Non American judicial systems all work differently and at this time it doesn’t appear that Paris is going to let this go until the “truth” comes out.

Reporting a false crime is illegal in most countries. I am not sure why that wasn’t taken into consideration before the alleged publicity stunt was carried out.

VIDEO Is Bambi back with Lil Scrappy? He pulls up on her for possible LHH spin-off