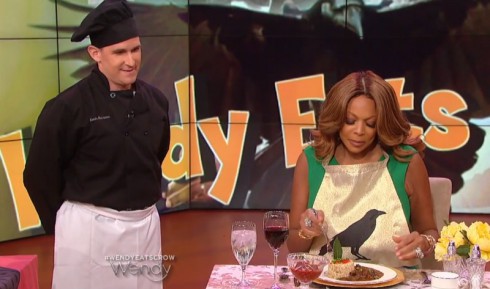 More than a year ago, talk show host Wendy Williams made an on-air prediction that Kim Kardashian and Kanye West would never marry. Then, when they got engaged in October, she updated her bet to say the marriage wouldn’t last longer than 72 days. If it somehow did, she vowed she would literally eat crow.

“I do know what I said and I’m gonna stick to it! I’ve always said that Kim and Kanye will never get married. And I said, if they do get married, I will eat crow. Right here, on this show,” she said last fall. “I’m a woman of my word.”

Just like she said, on the season premiere of The Wendy Williams Show today, Wendy stayed true to her word by celebrating 114 days of Kim and Kanye’s marriage by chowing down on crow gumbo.

“It’s got a nice consistency,” Wendy declared of the gourmet-prepared crow, which is apparently a popular dish in Lithuania. “I can taste the iron in it… It tastes kind of like chicken liver. You know, it’s not… so… bad!”