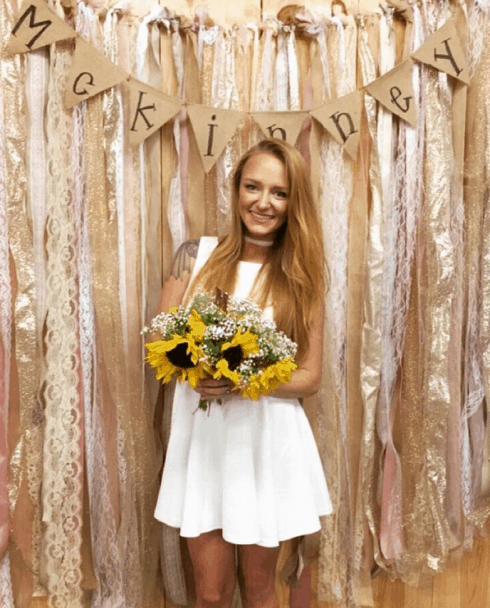 After it was confirmed that not even a hurricane could derail Maci and Taylor’s nuptials, the first pictures (and video) of the Mr. and Mrs. McKinney are here!

Maci wore a strapless, off-white gown. Her hair was styled in a sleek bun with a floor-length veil. She accessorized her look with a simple pearl necklace and matching earrings while Taylor looked dapper in his fitted grey tux.

Us Weekly provided a sneak peek into the romantic affair at Honey Lake Resort which included:

Floral arrangements by Missy Gunnels Flowers (babies’ breath, sunset roses, white hydrangeas and Dusty Miller made up the centerpieces) and a killer DJ set by Barnaby Xaphakdy. Instead of the customary layered cake, guests enjoyed a tiered display of delicious doughnuts by Katie’s Cakes & Catering, Inc. Before the reception kicked off, Bookout and McKinney had their first dance to John Legend’s emotional 2013 ballad “All of Me.”

The video of their first dance was added to the Things That Matter Instagram page but quickly removed. Thankfully, The Ashley was able to share a video of the special moment.

Compared to their unconventional engagement photos, Maci and Tayor’s wedding was storybook classic complete with a horse drawn carriage.

Congratulation to @macideshanebookout and @tmon3yyy for an amazing wedding this evening at Honey Lake Resort of Florida. @teenmomog_ @mtv @teenmomog #love #wedding #marriage

Something amazing is about to go down at Honey Lake Resort of Florida. #wedding #suprise #love

By the looks of it, the wedding party was big. Maci had eight bridesmaids who wore personalized flannels during hair and makeup.

The girls gettin ready for @macideshanebookout big day earlier!!! ? in their @pretty_rebels flannels!

We know Catelynn and Tyler were guests at the wedding but decided get their own party started early.

And a few more!

Congrats to Mr. and Mrs. McKinney!