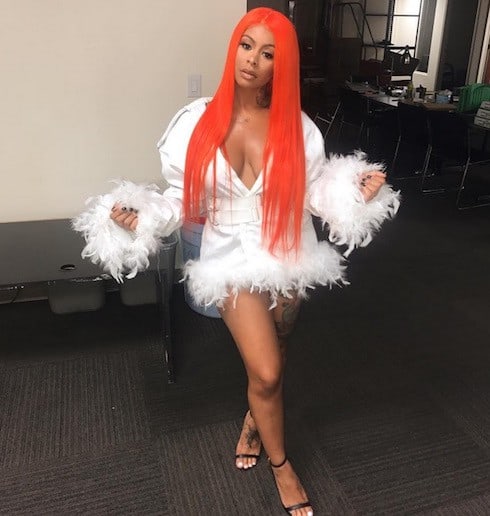 This season of Love & Hip Hop Hollywood got off to a fiery start for Alexis Skyy and Masika Kalysha before the first episode even dropped, so it makes perfect sense that things would end exactly the same way. Thanks to reports of Alexis Skyy pregnant with Fetty Wap’s child and Masika gunning for Alexis at the reunion taping, it looks like things between them won’t be resolved until Season 5 (if ever).

We’ll start with the pregnancy rumors, which Alexis herself appeared to stir up by sharing a pic of her swollen tummy on Snapchat. The Shade Room managed a quick grab and put it up for all the world to see:

So, one of three things is happening with that pic:

1) Alexis is basking in the afterglow of a tasty snack (possibly stemming from pregnancy cravings);
2) Alexis is trolling her detractors for a good end-of-season laugh (in which case, well done);
3) Alexis Skyy pregnant with someone‘s baby–either Solo Lucci’s (as implied earlier in Season 4), or Fetty’s.

Making option #2 a bit more likely is the fact that Masika Kalysia basically predicted this entire scenario a week ago, well before the reunion taped:

& I'll run off the stage crying & everyone will clutch their pearls & the world will care & she will hope for a season 5 contract ???

Speaking of the reunion, we also have a trio of scintillating tweets from the venerable @lnhhfights account, one of the steadiest around when it comes to all manner of Love & Hip Hop spoilers and tea spillage. According to their sources, Masika was eager to mix it up with Alexis at the reunion, but security kept the two women very far apart indeed–specifically because of Alexis’ pregnancy:

Production doesn't want Alexis and Masika on the same stage because they don't wanna risk Alexis " losing the baby" ?

Masika was backstage at the reunion looking for Alexis ?

I was told Alexis said something about Masika's daughter which is why Masika was looking for her backstage ?

We’ll almost certainly find out more before the season actually concludes. Though there’s been no official announcement as yet, based on a 14-episode season, the Love & Hip Hop Hollywood Season 4 reunion is currently expected to air on Monday, October 23rd.

Jhonni Blaze has a new boo, a new city, and a whole new reality show to call her own