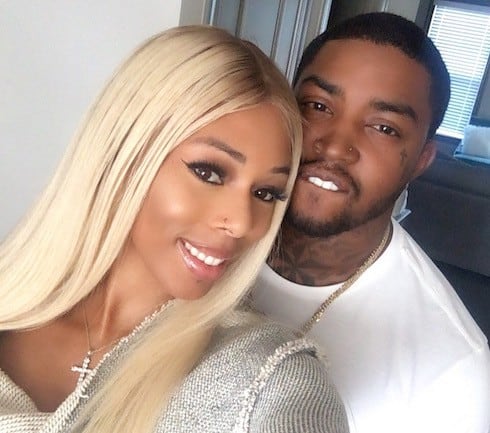 Earlier this year, it looked like current and former Love & Hip Hop Atlanta stars Lil Scrappy and Bambi were done for good. Their engagement petered out amid a haze of rumors and gossip about why things had come to an end; though we never got a straight answer, it was also clear that Bambi’s time on LHHATL was up. Likewise, it looked like Scrappy would be jumping ship to start a new reality TV life on Love & Hip Hop Miami.

Fast-forward a few months, though, and it appears that Lil Scrappy and Bambi’s relationship is completely back on track–by which we mean the sound of marriage bells might be in their very near future! Fans were surprised to see Scrappy hitting the streets of Miami “looking for the Bam” a few months ago; shortly after IG posts of Scrappy interviewing people on the street and asking if they’d seen her went viral, Bambi tagged her location in an update, and Scrap managed to pull up on her at a club.

From there, we fast forward just a few weeks–and Lil Scrappy and Bambi’s relationship is Instagram official once more:

Got my woman on ha Cinderella shiznyee well we call it Bamarella and u Knw I’m the mf Prince . @adizthebam let’s make a #fairytale

But that’s not even the most scintillating news. A recent interview Bambi gave to The Hip-Hop Socialite (via Bombshell) makes it clear that she’s only willing to give Scrap the time of day if he’s serious–but that serious is all he’s been. Here’s what Bambi had to say about her current relationship with Scrappy:

He’s really putting forth a lot of effort right now, and I never really had a problem with him as a person. So we’re friends, and he’s trying to earn back a different title, and I’m here for it. I’m just seeing what he has to offer. I’m not really playing any games, but I’m just continuing on with my life the way that I’ve been, and I feel like if he’s really serious about moving forward with this relationship, then he’ll show it. And he has been, so we’ll see what happens.

A post-interview update to the article further points out that rumors the two of them recently tied the knot in secret have been flying like mad. According to Bambi’s reps, the rumors are untrue…but–and, again, this is straight from Bambi’s reps–”a wedding will be happening soon.”

It really is wonderful to see such happy, positive news about the two of them, especially given that a few months ago Lil Scrappy took to Instagram to voice his displeasure with rumors that he had put Bambi in the hospital, and that that was the real reason the two of them had split:

Boy they stay with the rumors and blog talk even tho it ain't real they still put it out there cus I ain't given em nothing lol , dnt believe everything u hear and half of what u see fr

Congrats to the two of them on getting back together and making it work! It’s always nice when the nastiest rumors turn out to be untrue.