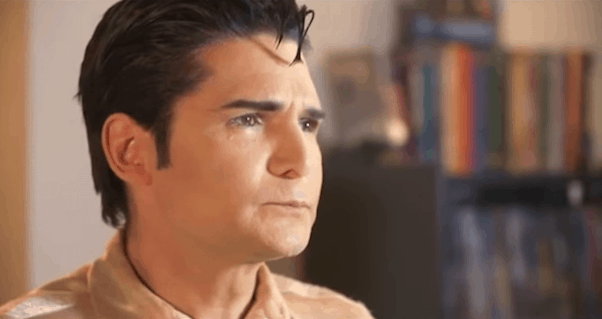 We’re only a couple of weeks away from the Corey Feldman movie truth official release — (my) TRUTH: The Rape of 2 Coreys, Feldman’s long-awaited, crowdsourced documentary on his and Corey Haim’s child abuse allegations, comes out on March 9th. Feldman has been making the publicity rounds to detail and tease some of the allegedly explosive accusations in the documentary. We got a little bit of both in a recent interview on The Domenick Nati Show, where Feldman claimed he was once nearly mowed down by monster trucks in an attempt on his life.

Feldman also said that the apparent assassination attempt was one of two that he’s survived in recent years. But — and I say this with all possible respect for a man who’s been trying for so long to convince people of the sexual abuse he says he suffered as a boy that it’s almost impossible not to believe him — a stabbing at a red light is not the attempt people are going to be talking about once they hear this interview.

Feldman doesn’t offer too many details about the monster truck assassination attempt. Unfortunately, he also doesn’t say whether viewers should expect to hear more about it in the Corey Feldman movie truth. (Though that also maybe lends credence to the story; while Feldman is still trying to sell tickets, he doesn’t do it at this specific point in the interview.)

Feldman’s description starts at around the 7:47 mark (we’ve embedded the full interview below). In response to a question about whether he’s gotten any death threats or other pushback since beginning work on (my) TRUTH, Feldman says that that’s very much been the case:

Not only have I received multiple death threats from multiple people working in a kind of cult if you will — which is a conspiracy, a group of people that was put together to kind of scare me, to frighten me. And yes, I’ve been receiving tons of pushback from those people, and I’ve also gotten two attempts on my life. Two actual attempts, and I actually ended up in the hospital on one of them.

I was stabbed. They opened my door; they stopped me at a stoplight, in an unmarked car. Stabbed me once. Opened my door, got it open, stabbed me once, and then walked away….And we actually have a lot of information about the connections, and how we know that it was direct. But I can’t expose that, of course. A lot of this you’re going to have to wait and see in the film.

But the monster truck encounter is arguably the more frightening of the two, just because of how *strange* it sounds. Here’s Corey Feldman describing what it was like to have two monster trucks barreling down upon him in what he’s convinced was an attempted murder:

Then there was the first incident, when I almost got run over by two speeding monster trucks that came at me in the middle of nowhere after we’d been sitting in one place for over an hour, and then decided to walk. And then as soon as we started walking, these two trucks appeared out of nowhere and tried to run us over. So, I mean, it’s very real, very scary stuff.

Again, I don’t mean to try and discredit Corey Feldman, who has no reason to try and fifteen minutes of fame himself with child pedophile allegations, the way so many women have been accused of doing with the #MeToo movement. But this story begs a few questions. Where was Feldman at the time and who was he with? How does one hide two monster trucks? After they missed, did the drivers of the trucks not circle back around and try to run Feldman down again? How exactly does one evade a monster truck indefinitely? And, though the visual would be far less arresting, why would you use monster trucks to try and run a person down when it seems like regular trucks could do the job just as well, if not better?

Hopefully I’m wrong, and this story *does* come up when the Corey Feldman movie truth drops next month. And it sounds like the documentary will generate plenty of other headlines. Elsewhere in his interview with Domenick Nati, Feldman says he names pedophiles in total. One of them is apparently a big Hollywood name that “startled” Dr. Now when Feldman showed him the documentary.

(my) TRUTH streams in an exclusive one-time event on Monday, March 9th. You can buy tickets here.

Juelz Santana and Kimbella both returning for LHHNY Season 9