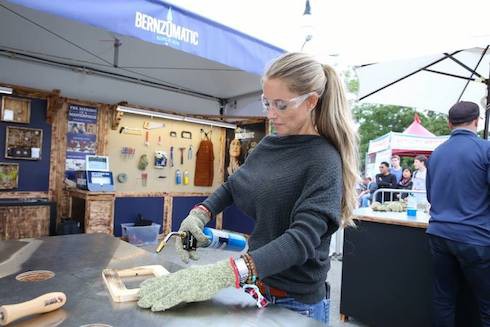 Nicole Curtis fans holding their breath for word on a Rehab Addict new season have just been rewarded! Curtis herself confirmed Rehab Addict Season 8 in a brand-new interview before doubling down on the good news in a string of social media updates.

As it turns out, the news was initially overlooked because it came in the midst of the now-infamous Nicole Curtis breastfeeding video–which is infamous largely because of the number of fans wondering why it’s a big deal that Curtis breastfed her youngest child in the middle of an interview in the first place. (The tl;dr version: It isn’t.) You can read more about that kerfuffle here; as for Nicole’s comments on a new season of Rehab Addict, fast forward to about the 1:26:00 mark of the video below:

As part of the Rehab Addict Season 8 news, Curtis confirmed that she “just signed” the contract, after “tak[ing] a long time” to decide whether she wanted to do more. Nicole said she and her crew will begin filming sixteen (1^) new episodes “in about two weeks.” But that video was filmed on January 9th, which means it’s highly likely that cameras for the DIY hit will begin rolling this week!

Additionally, Curtis said–emphatically–that her show’s new episodes will be filmed exclusively in her home state of Michigan: she’s “not going back to Minnesota,” and it’s time for Metro Detroit to get more love.

Nicole then re-confirmed the news for her 1.3 million social media followers, and lo, there was much rejoicing and celebration:

Yes, don't call it a comeback …. I've just been taking my sweet time doing what needed to be done. My guys and I are ready to rock it . No bs, you know how we do it 🙂 #detroit #isaidyes #noneedtofakeit#season8#rehabaddict#nicolecurtis#mom#nodrama#getyourhandsdirty#letsgo

Happy 2 yr anniversary to this #punchlist:) it's never done –I told myself before one thing gets started for #season8 everything else would be complete —-#rehabaddict #detroit

Congrats to Nicole & her crew! And thanks for deciding you had another season in you 🙂

DIY hasn’t yet announced a premiere date for the Rehab Addict new season, but we’ll be sure to keep you posted when the news gets out. For now, check the network’s listings to stay on top of the two or three Rehab Addict rerun marathons they run every week.

Did Rehab Addict get canceled? Nicole Curtis urges fan petition to get show back into production

As Fixer Upper’s fourth season comes to a close, Chip and Joanna Gaines look to the future of their Texan empire