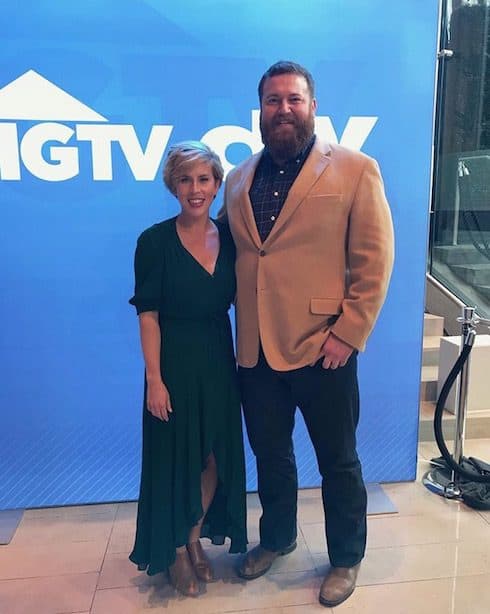 Early this year, HGTV confirmed that it had ordered a third season of Home Town, the feel-good-est show on the network. Making the news even feel-gooder was that the order is the network’s largest ever: where Seasons 1 and 2 were ten episodes each, Season 3 will be thirteen. That’s nearly one more full month of extra Napier delight on Monday nights.

Since that announcement, we’ve learned a *ton* more about what’s been going on down Laurel way. Because the premiere date is starting to creep up, we thought it was high time for a full-on HGTV Home Town Season 3 sneak preview, complete with what’s been happening in the Napiers’ world! (And yes: that does mean plenty of pics of their adorable baby Helen.)

HGTV ordered a third season of Home Town awfully quickly. And Fixer Upper won’t be back until at least 2019. So we originally assumed that Home Town would carry on Chip and Joanna’s annual autumn debut and make its Season 3 return right around this coming Thanksgiving.

But it turns out that Ben and Erin have got a TV tradition of their own. Just as Season 2 debuted in January of 2018, Erin has since announced that Home Town will be back with Season 3 in January 2019. There isn’t yet an exact airdate, but if last season was any indication, the first Monday of the year is a good bet — meaning you should circle January 7th, 2019, on your calendars. (But maybe do it in pencil.)

And when you do see the promised commercial advertising the new season, just remember that Ben wore a Santa suit in a Mississippi August for your entertainment:

You have this commercial to look forward to in a few months on @hgtv. Season 3 is coming in January!

A few days before that update, Erin also revealed that she and Ben are “about halfway” through filming the new season. Since that was five full weeks ago, it’s likely that production is now rounding the final corner and headed for the home stretch — no pun intended:

We’re about halfway through filming season 3. Here’s a cutie from season 1 on my morning walk. #hgtvhometown

Erin and Ben somehow found the time to write a memoir

You can be forgiven for thinking that Erin and Ben, as first-time parents with a bigger-than-ever episode order to fill, would maybe have toned down their extracurricular activities this year. But the opposite has turned out to be true: 2018 sure looks like it’s been a far busier year for the Napiers than any other year since they filmed the Home Town pilot.

For starters, they wrote a book. And recorded its audiobook companion. And they’re going out on a multi-leg tour (?!) in support of the book. So don’t be surprised if they both look rather fatigued when you go to get your copy signed!

The book, entitled Make Something Good Today, comes out October 2nd. It looks just as bright and optimistic as its title suggests. As an added bonus, Erin’s reveal of the cover came with a behind-the-scenes history of the dress she’s wearing on it:

Got to hold the first print of our book jacket today and squealed. The things you might not know: I bought that dress for his 10 year high school reunion in 2012. I wore it in my first magazine feature about my letterpress wedding stationery company, Lucky Luxe, and again for the season 1 premiere episode reveal day. It’s my lucky dress. That ivy wall belongs to Scruggs Photography on Central Avenue in Laurel and was one of the early locations of our town’s farmer’s market when it was first starting to grow and we would volunteer manning it with @laurelmainstreet in the summers, sweating through our clothes every week. When @bethmorganphotography took this photo, Helen was 2 months old and being pushed in her stroller just out of frame by @lindsaymichellemiller. Ben was wearing a @scotsman.co chambray field shirt that smelled like Kreigler America One 31. I chose a felt paper stock, a nod to my watercolor paintings, and asked @novia_jonatan to do the hand lettering of the title, which was then debossed, essentially letterpressed, on the cover in a nod to my first company. I designed the jacket and all the pages, and the back cover is even more personal, a photo I took of our belongings. I just can’t explain what a deeply personal labor of love this book was for us. Oh, friends. I hope you’ll love it and pass it on to someone else. ❤️ (link in profile to pre-order)

You can learn a little more about the book at its official site here. And if you’re interested in heading out to a reading and signing, you can see the complete Make Something Good Today book tour itinerary here.

The Laurel Mercantile had a baby, too

The Napiers aren’t the only ones in Home Town‘s orbit who’ve procreated. In between caring for their child, filming their show, and writing a book, Ben and Erin also oversaw the expansion of Ben’s woodshop and its partial conversion into a second Laurel Mercantile location! (This definitely seems like something we’ll get to see more of throughout Season 3.)

The second shop is more a general store than the downtown Laurel spot. The Mercantile’s Instagram page called the second location a place to “reminisce in old tyme fun: hot dogs, hot coffee, tools, live bait, brand new t-shirts, country music your grandfather listened to, treats and sodas of every kind and a pair of rocking chairs waiting to be filled with stories.” Judging by the accompanying snapshots, their description is right on the money. Here’s a look:

Today is the day— the #ScotsmanCo General Store is open for business from 10-6pm! Come take a look around and reminisce in old tyme fun: hot dogs, hot coffee, tools, live bait, brand new t-shirts, country music your grandfather listened to, treats and sodas of every kind and a pair of rocking chairs waiting to be filled with stories. | Open Monday- Saturday from 10-6pm at 1 Spec Wilson Rd, Laurel, Miss.

Finally — and perhaps most notably, reality TV-wise — the Napiers’ devotion to craftsmanship has netted them their very own furniture line. Erin explained that getting his own furniture line has been “Ben’s biggest goal for the last few years,” and the line will debut this fall at no less auspicious a venue than Market Week at the the High Point Market in North Carolina.

For those of you who might not know, the High Point Market is pretty much the epicenter of the American furniture industry. And Market Week, which takes place every October, is to that industry what New York Fashion Week is to fashion design and modeling. By way of comparison, note that Joanna Gaines debuted her furniture line at Fashion Week back in 2015.

Earlier this year, Ben described what the line meant to him — and specifically that the line is being manufactured by an American company, the Vaughan-Bassett Furniture Company, out of Galax VA. For Ben, it all goes back to the ultimate goal of “revitalizing small-town America,” something that’s been in Home Town‘s mission statement since day one:

…A few years ago, when an overseas furniture company wanted to put the Scotsman name on their furniture, it was easy to say “no thank you”…To drive through a town that has lost its industry is sad. Laurel is still here because of the jobs and industry that are here….This is the realization of a dream that was sparked at a very young age for me. You’ll soon be able to buy @scotsman.co and @laurelmercantile furniture, built in America, from Appalachian hardwoods. You can rest assured that this furniture will be durable, and that for every tree that was cut to build a piece of furniture, another was planted in its place. I’m excited to be able to design and build sustainable furniture with one of America’s last great factories.

A gratuitous photo gallery of Helen Napier, the real star of Home Town

There’s no reason to keep talking when we’ve got cute baby pictures to look at 🙂 So I’ll conclude by saying yes, we’re going to see more of baby Helen when HGTV Home Town Season 3 returns next year.

And now, the long-promised pics — in helpful chronological order:

Snuggles on the couch between bathtime and bedtime. #bigsgirls

So, @erinapier is designing the pages of our book, #MakeSomethingGoodToday, that releases in October. Helen has been a BIG help. “I don’t think it needs a drop cap, mom.” – Helen . #coworker #familybusiness #CEO (cutest executive officer)

May 21, 2017, I hung my Holloway porch swing on our porch for @erinapier. That was one week after we found out we were pregnant with Helen. It's turned out to be one of her favorite spots.

Filming starts next week but for now I am reading a book and I can hear the ocean and a giggly cooing baby and I have a crush on this fellow and today was very nice. ?

For @scotsman.co’s first Father’s Day, Helen was baptized by his parents in a gown made by my mama from her wedding dress. I think of Ben and of my Daddy today and realized this: Ben will be the standard against which Helen measures so much. The measure of a man who is worthy, who loves her well, who is tough and tender. The measurement of thoughtfulness and steadiness and faithfulness she will hold up to see if anyone compares to. So much that matters will begin and end with Ben. And he’s ours. Aren’t we lucky? ❤️ ?: @lindsaymichellemiller

Well we didn’t make it to church this morning but one of us at least dressed for it.

Home Town‘s third season will debut in January 2019 on HGTV. Until it does, keep your eyes peeled for rerun blocks here, via HGTV.