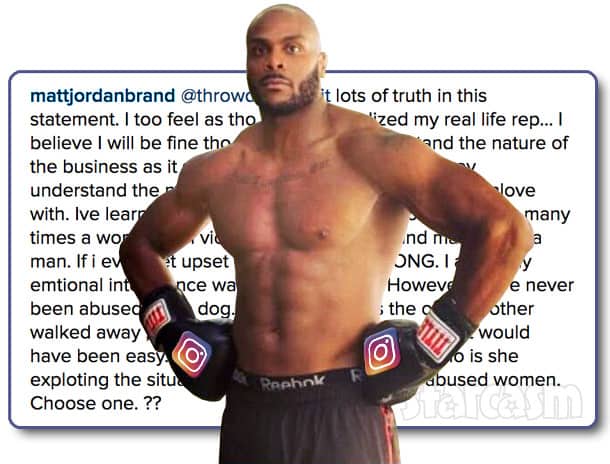 The dysfunctional on-again, off-again relationship between The Real Housewives of Atlanta‘s Kenya Moore and Matt Jordan continues to “twirl on” off screen as Kenya opens up about Matt’s violent outbursts and alleged drug use on The B. Scott Show and Matt beefs up his Instagram muscle with several vigorous workouts on the keyboard.

First up is Kenya, who went on The B. Scott Show podcast this week and talked at length about all things RHOA — including Matt. Here are some excerpts followed by the full podcast:

On her ‘sh!t show’ with Matt: “It’s just one of the things that I’ve been dealing with regarding his anger and his emotional outbursts. That was just one of the first times that the show learned about it — because we were filming at that time. But before, in Mexico, you know he admitted to kicking in the door and having that outburst. That was the first time I saw him get like that since we had been dating — for over a year.”

On whether or not substances may contribute to Matt’s outbursts: “You know what, honestly, I’ve never seen him do drugs. He doesn’t smoke. He doesn’t excessively drink. I can’t say [his anger] is from steroids because I don’t have any proof of that. I’ve only heard what other people have speculated — but I’m not going to say someone’s doing drugs when I don’t have proof of it. But, I was concerned with the behavior and at some point I did question it…but I never got any real answers.”

On what Matt could ever possibly do to make their relationship work: “He has done so much. Love is not enough. First of all, I believe that’s a very loaded question. I don’t think it’s possible. Admit to lying, admit to not being honest about what everything was. Having some real intense therapy for a while. I don’t think that it’s immaturity anymore. I think there are other things at play. I’ve seen too much and I know too much. And some things I will never say because I think that you have to draw a line some place — especially when you’ve ever had love for someone you’re gonna hold their deepest, darkest, secrets. And I will always do that. I will never betray him that way. And if he wants to talk about those things, I will allow him to talk about it. But I will never talk about it.

So, for me you need to seek real, intense, therapy and allow the therapists to do their jobs.

I’ve had therapy. I’m not ashamed of it — in fact, it saved my life. I mean…you know how I was with my mother. My mother used to sit in the same with me, this close from each other, and not even look at me. [She would] acknowledge everyone in the room and not look me in my face. She wouldn’t even say ‘hello’ to me — and I was her child. And that happened for most of my life. So you can’t tell me that I didn’t benefit from [therapy].”

I’m not ashamed of that.

Meanwhile, Matt got back to Instagram flexin’ with this lengthy diatribe about Kenya (aka shorty):

So Help me understand yall please. Its not what you do its how? I admit I was wrong I own it. I should have never damaged anyones property. Trust me my image will be fine. Im good im always winning GOD GOT ME. Im getting new clients and offeres for things everyday. I admit guilt I admit fault. Ive been hurt,drugg, embarrassed, violated and flat out disrespected by shorty. I sat in the hospital waiting room for 5 hours wondering what was wrong with shorty. I sat and watched her hold hands with another man while i sat back and watched (yes we were already seeing each other.) I had to find out from some third party person that she was deal with some married men in Nigeria for money, and that one of them cut her off because she talked about the relationship that was supposed to be private…how you think that made me feel???. She claim she love me?? How when throughout my entire relationship shes is texting “hey baby hey sweetie” i miss you” “when are you going to send for me.” to some mothaf**ka name jojo Nigeria.(how the num is saved)

Then tell my mother he is a investor you use him to fund ya haircare line. You are evil! You saying he used to date ya friend??? Who kenya?? then why you letting him call you baby sweetie hunnie?? Yeah I have my own issues and im angery so when I went to the hospital last year because of depression just say why…….why kenya ? Because you were in LA doing god knows what… Then when porsha yells out one eyed african yall act like she crazy. I made you the first person they called when I was in the hospital. And you made TMZ with that lil b!tch ass white boy Anthony you tell to meet you at LAX EVERYTIME and straight from the A Ya first call. Of course after ya friend that works at emory told you all my business. Thanks emory hospital good job following HIPPA. Now play victim?? Asking me to pick you up from the Marriott in buckhead and when i ask what you were doing just in conversation…you refuse to answer. When I begged you to come to miami to work on our relationship and you tell me you are in LA with brandon. Once again I have to find out later that you where.4 blocks from me on south beach the whole time. Disceptive!!

Wait a minute, Jojo Nigeria?! That is WAAAYYY better than Mister Chocolate!

Matt also took to Zenstagram to share this bit of wisdom: 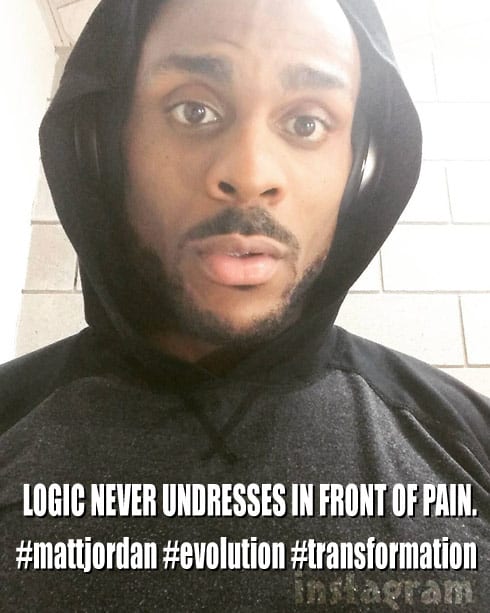 In the comments section for the photo, this conversation happened:

COMMENTER 1: I’m not understanding why you aren’t out here defending yourself. You know very well that you are ACTING as I notice that you have actor listed as one of your credentials. Why are you out here allowing Kenya to Ruin your REAL LIFE REPUTATION trying to help Kenya with her broke down ass to have a storyline ass. These things will follow you forever and cost you employment and job opportunities or block advancements for you in the future. It’s so plan as day for me to see that this is part acting part feelings and a lot of manipulation on Kenyas behalf staged for the camera in order to make you look Soooo crazy. It’s not a good look. This could be used against you many many years from now when you’re not even expecting it or thinking about Kenyas crusty old dried up ass anymore. Just please speak up and let us know that this was all for TV. Your sister warned you and made Kenya aware that she thought that you would ultimately be used in some type of way outside of just faking the boyfriend thing. I really wish you would speak up!

COMMENTER 2: Very well said! I appreciate your wise input since most do not have the capacity to understand. I believe Matt has damaged his REAL LIFE REPUTATION and GOOD STANDING as well. He showed the world DANGEROUS undesirable traits people (men and women) should have nothing to do with. Any type of ABUSE or VIOLENCE is SERIOUS and he doesn’t understand he advocates this behavior by his actions, even when it’s for entertainment. Women across the nation are in ABUSIVE/VIOLENT relationships that have ruined their health and lives, but here he feeds into to get paid. EVERYTHING you said makes sense and it’s clear to me this SELF-IMPOSED DRAMA is for TV and entertainment. Walter had enough sense to walk away from it; he has a son to feed and a business to run and I applaud him for being a MAN and RESPECTing his SELF-WORTH enough to not bow down to FOOLishness.

MATT JORDAN [To Commenter2]: lots of truth in this statement. I too feel as tho I have jeprodized my real life rep… I believe I will be fine tho. Many people understand the nature of the business as it seems you do too. In addition they understand the nature of the women I regrettably fell inlove with. Ive learned thought this stiuation that no matter how many times a women can violate disrespect, use and manipulate a man. If i even get upset once IM DEAD WRONG. I admit my emtional intelligence was low with kenya. However I have never been abused like a dog…almost daily. Yes the other brother walked away , i should have too. If I wasent in love it would have been easy. Yall seem to go back and forth tho is she exploting the situation for TV or is she a scard abused women. Choose one. ??

DING!! DING!! That ends Round 37. Stay tuned to Starcasm for more coverage of the epic heavyweight shade match between Kenya and Matt as it plays out in real time, and tune in to Bravo to watch it play out on the small screen with new episodes of The Real Housewives of Atlanta airing Sunday nights at 8/7c.