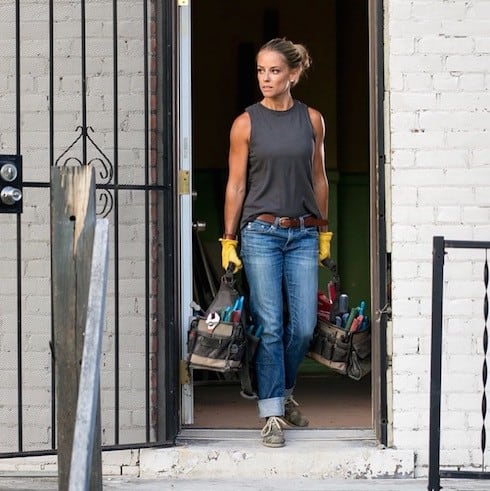 Nicole Curtis’ long-awaited return to TV is almost over. The Rehab Addict star, whose triumphant march through 2017 has been well-documented by us and well-noted by fans, is set to debut Rehab Addict Season 8 on October 4th. The nearly two-year hiatus seems to have given both Nicole Curtis and family a chance to reflect and remember what’s most important to them–a theme that’s ever-more-prevalent in Nicole’s always-entertaining, often-enlightening social media updates.

For one thing, Nicole’s ongoing crusade for the right to public breastfeeding has become something of an unexpected drama throughout the year, ever since she breastfed her toddler this past January during a radio interview that was also being broadcast over Facebook Live. Nicole has always been frank about the difficulties of single parenting–something she dealt with years ago for her oldest son Ethan, and is now going through again–and her posts about those difficulties are always met with a wave of viral praise. Just like this most recent:

Amazing week speaking out for women supporting women. Ladies don't give into this hype that there's some "balance" to achieve between work and home -it's bs-no one ever asks a man how they find it 🙂 the answer is you don't and if someone says they found it ? They're lying 🙂 love your babies and go on with your badass self. Surround yourself with women that support NOT judge. (Oh, and practice being that kind, as well-and own it & retract when we aren't) I don't have too many regrets in life, but I wish I had trusted myself more and listened to others less.

(Devotées will recall that just two weeks before the above post, Nicole again took to Instagram to express her incredulity at a world “turning backwards.” It seems the breastfeeding crusade will live on well into 2018.)

Speaking of Nicole Curtis and family, Nicole’s most recent IG update sees her recalling some of the many sacrifices she made while raising Ethan. Rehab Addict still calls for very long hours, but it’s impossible not to smile at the thought of all those sacrifices paying off, now that Ethan can help take care of his little brother:

My heart ❤️ when I was a young mama with the big guy on the right,I had to sacrifice time with him to pay the bills -makes for a good cry playing with the little one missing all those missed moments with his brother. The time goes so fast.

On a somber note, followers of Nicole’s social media pages will recall the sad, yet ultimately uplifting story of Tessa Prothero. Back in 2015, then seven-year-old Tessa was diagnosed with stage four neuroblastoma, and Nicole, after meeting her at a Rehab Addict open house, became one of Tessa’s most ardent supporters. Unfortunately, after a much longer battle than almost anyone expected, Tessa succumbed to her disease earlier this year. Though we don’t yet know if Tessa or her family will feature in any of the new Rehab Addict episodes, it’s clear that the young girl’s bravery more than left its mark on Nicole:

Finally, and on an uplifting note, here’s a quick behind-the-scenes look at some of the goofier things that happen at 1:30 on the morning during a Rehab Addict remodel 😉 It’s Nicole Curtis and family, extended-style, bringing you a celebratory dance in honor of the new season:

I could shorten this, but I thought it was more fun letting you see we all crammed in the little bathroom to have a special entrance for our song 🙂 #rehabaddict #nicolecurtis #season8 new episodes October 4th !!!!! And how adorable are my guys ????