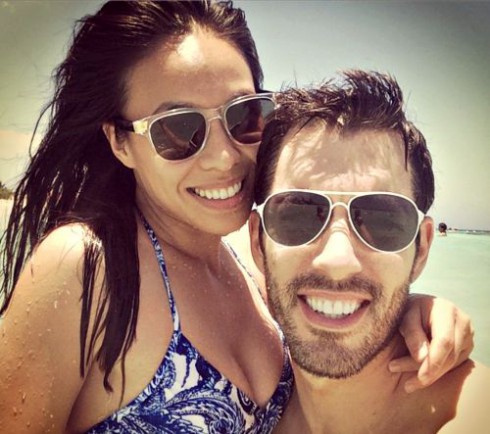 When we first answered the question “Are the Property Brothers single?” back in 2013, finding the identity of Drew Scott’s girlfriend, Linda Phna, was pretty difficult. For whatever reason, they decided to change that within the past year — and now regularly post cute pictures and updates!

Linda, who actually works for Scott Brothers Entertainment, even appeared on this season of Brother Vs. Brother — where she feigned support for her man, but had an ulterior motive.

“For selfish reasons, I’m kinda hoping that @mrdrewscott loses tonight’s #BROvsBRO on @hgtv US,” she joked on Instagram. “Sorry #TeamDrew.”

Drew also shows the love for Linda on social media. (Taking secretive pictures of your partner while she’s sleeping is “showing the love,” right?)

You know your gf and puppy partied too hard last night when you find them like this! #PoopedPuppy

He got a bit more serious when talking to Your Tango about why he loves Linda.

“My girlfriend and I are both workaholics. We love what we do and that we can work side by side. The small gestures are romantic to me — it makes me smile every time I find funny notes in my bag when I go away on business trips,” he said. He added in another Your Tango Twitter chat that marriage is probably in their future, saying, “When you are with a woman as amazing as her… You don’t wait too long.”

The pair further teased fans on April Fool’s Day with a couple of videos. (I’ll confess they totally had me with the first clip!)

Even though they aren’t engaged yet, it’s great to see Drew and Linda are going strong… Here’s to hoping they continue to share their adventures on social media!

What are The Property Brothers’ net worths? How did Drew Scott and Jonathan Scott make their fortunes?