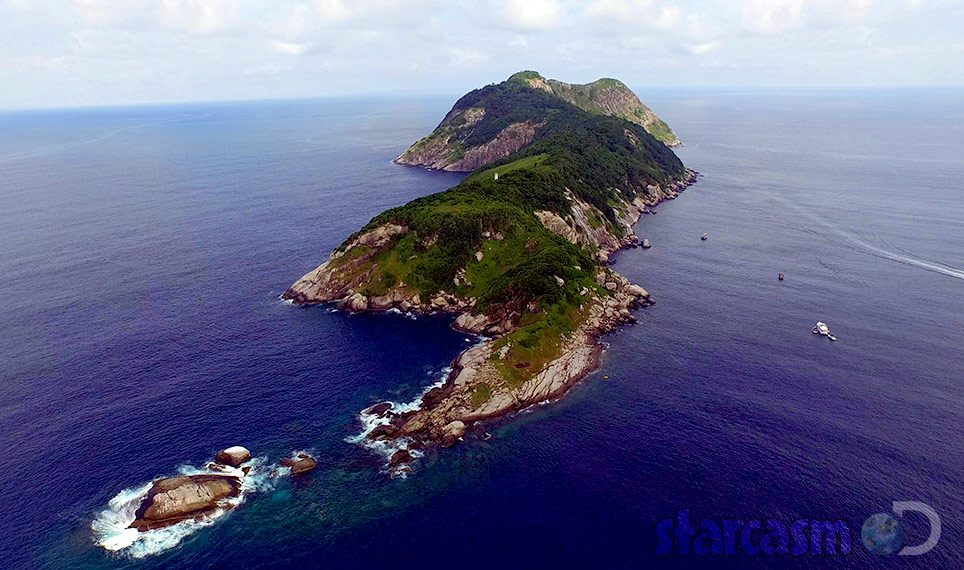 Last week more than two million viewers tuned in for the series premiere of Treasure Quest: Snake Island, making it Discovery Channel’s most watched and highest rated non-spinoff series premiere of 2015. In the first episode we got to meet the team of treasure hunters who will be risking their lives in an attempt to find the legendary “Treasure of the Trinity,” which they believe may be hidden on a small, snake-infested island off the coast of Brazil.

While it’s impossible to answer at this point if the Treasure of the Trinity is real, it’s not so hard to figure out whether or not “Snake Island” is real. So, is there really an island located off the coast of Brazil that has more venomous snakes per square meter than anywhere else on earth? And not just any venomous snake, but the golden lancehead vipers, one of the world’s most deadly serpents — which can only be found on this particular island?

This sounds like Hollywood fiction, but believe it or not, Snake Island is 100% real.

Snake Island (aka Queimada Grande) is a 430,000-square-metre island 90 miles off the coast of Santos, Brazil. It is the only know home of the golden lancehead viper (aka Bothrops insularis). According to National Geographic, which sent a film crew to the island in 2000, “Experts say there’s one golden lancehead here per square meter (1.2 square yards). Each golden lancehead’s venom is five times more potent that of its closest relative, the fer-de-lance, responsible for most snakebite deaths in South America.” 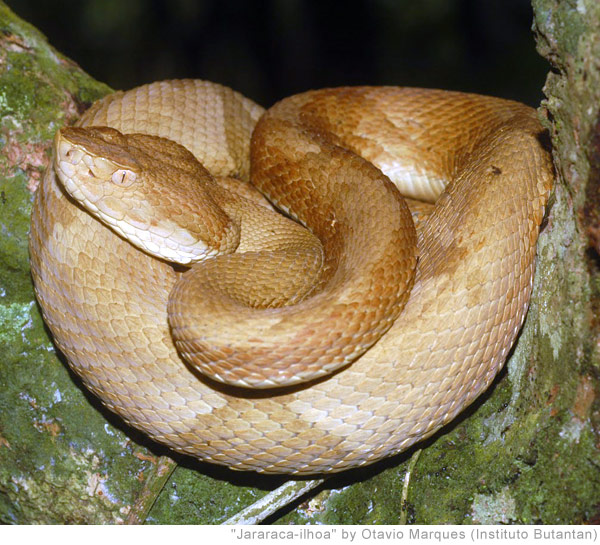 National Geographic weren’t the only ones to send a film crew to the island, VICE made an hour-long documentary about it last year that inspired quotes like this from editor-in-chief, Rocco Castoro, and senior producer, Jackson Fager:

“It was like a David Lynch movie through the prism of Satan’s assh0le. The anti-Galápagos. Darwin in reverse.”

“[It’s] cut off from the mainland and perhaps the land of a long-buried pirate treasure, according to the stories from local fishermen. But they also told us there were aliens on the island, so pretty much anything goes. It’s scorched earth. It’s where I would send my worst enemies to live, and I look forward to setting up a business with the Brazilian government to do just that. After the World Cup, of course.”

Here is the full VICE documentary on Snake Island:

Interestingly, the VICE documentary focused in on a different treasure on the island: the snakes themselves; and also a completely different sort of pirate: biopirates! From VICE:

The golden lancehead is so unique and its venom so potent that specimens procured by snake-smuggling “biopirates” can fetch up to $30,000 apiece on the black market (with prices going much higher depending on the location of the rich weirdo snake collector or, some have speculated, the black-market biopharmaceutical chemists attempting to beat Brazil on a patent).

Another interesting thing brought up in the VICE documentary that wasn’t really mentioned on Treasure Quest: Snake Island, at least not on the premiere at least, is that the island is home to a lighthouse! The VICE camera crew was actually tagging along with the Brazilian Navy as they conducted their annual maintenance inspection of the lighthouse. 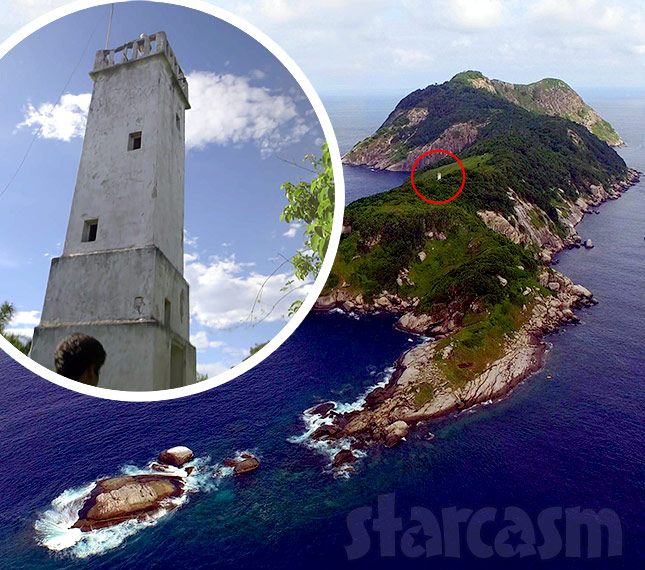 The lighthouse was originally built in 1909 and was initially maintained by an actual human lighthouse keeper! From VICE:

[Snake Island’s lighthouse] has been automated ever since the 1920s, after the old lighthouse keeper ran out of food and disappeared while picking wild bananas in a small grove near the shore. According to legend, he and the members of his rescue party died one by one, all alone and in search of one another after each had been missing for some time.

Now that we know Snake Island is real, I suppose we should tackle another question about the authenticity of Treasure Quest: Snake Island: Is Mehgan Heaney-Grier real? There can’t possibly be an actual world-class/world-record-holding diver with a degree in Ecology and Evolutionary Biology and Anthropology who moonlights as a supermodel, right? Wrong. 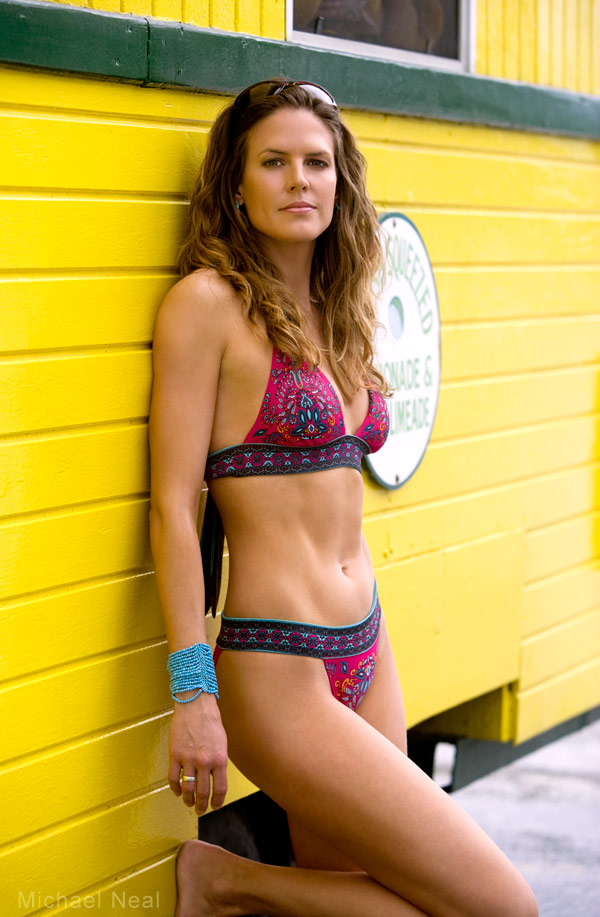 Mehgan is TOTALLY the real deal, and in addition to her diving and bikini-sporting prowess (above) being highlighted in too many magazines to count, she’s also made numerous talk show appearances, including The Late Show with David Letterman:

And take a look at this beautiful shot of Mehgan from LIFE magazine: 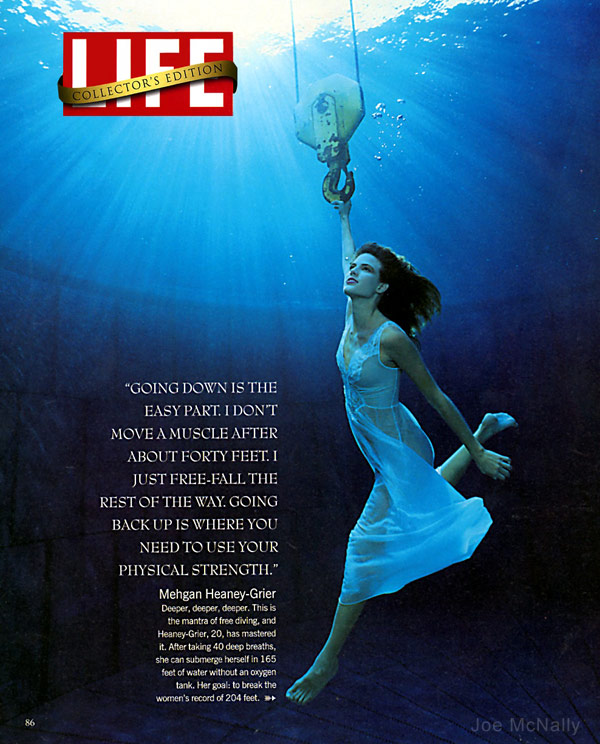 OK, so maybe “supermodel” might be stretching things just a bit, but I’m only going by what Dave said. 😉 You can check out Mehgan’s website www.freediver.com for more about her!

So, to sum things up, Treasure Quest: Snake Island has a legendary centuries-old treasure, an island packed with deadly snakes that only exist on that island, multiple varieties of pirates, and a supermodel anthropologist diver. In other words, you need to be watching this show! New episodes air Friday nights at 10/9c on Discovery.

History of the Treasure of the Trinity from Treasure Quest: Snake Island