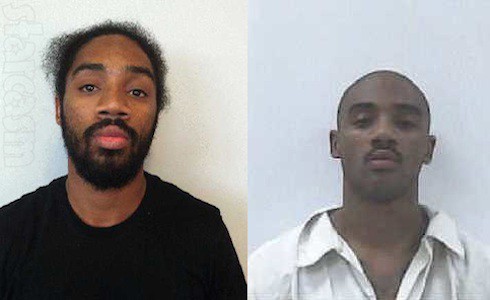 When is Scrapp from LHHATL getting out of prison? The 28-year-old hasn’t featured too prominently on Love & Hip Hop Atlanta’s fifth season, largely because he was imprisoned for part of the show’s filming schedule. We previously reported on the drug trafficking charges for which Scrapp was sentenced; now, we know when to expect Scrapp–real name Will Cortez Robinson–to be released.

Scrapp DeLeon was arrested for possession of–to put it gently– “a LOT of marijuana” in Taliaferro County GA in May of 2014. (The mug shot on the left above is from Scrapp’s 2014 arrest; the one on the right is from earlier this year.) We don’t know exactly how much Scrapp had in his car, but he fell into the 10-2000 pound range according to Georgia’s sentencing guidelines. It’s for the single charge that Scrapp was sentenced to a total of 20 years in prison; for his specific charge, Georgia has a mandatory minimum of five years.

However, according to Scrapp’s file with the Georgia Department of Corrections, his “Max Possible Release Date” is January 20th, 2021. That date can be different from the total length of the sentence “due to the offender receiving clemency by the State Board of Pardons and Paroles.” The state’s site goes on to explain that “The Max Possible Release Date is the expiration date of the longest running sentence with credit for time served in a county jail prior to conviction and sentencing.” It therefore looks like Scrapp had already served two months, since he began his official incarceration on March 15 of this year, but his release date is expected to be in January of 2021.

Those dates sync up with a series of Scrapp DeLeon going-away parties in late January of this year that Scrapp himself promoted:

#Repost @obiethepromoter with @repostapp. ・・・ OBIE THE PROMOTER PRESENTS THE SPECIAL EDITION OF #4PLAYFRIDAYS THE #LOVEANDHIPHOP EDITION AND GOING AWAY PARTY FOR @SCRAPPDELEON_NBL AT THE NEW FRIDAY NIGHT HOTSPOT @ELLEVEN45 2110 PEACHTREE ROAD NW ATLANTA, GA THIS EVENT IS ALL BEING HOSTED BY SCRAPP DELEON CO-STARS FROM #LOVEANDHIPHOP @IAMKARLIEREDD AND @HITMANSTEVIEJ_1 EACH AND EVERY WEEK ITS A MOVIE THIS WEEK IT WILL BE EVEN CRAZIER THEN EVER BEFORE. FOR TABLES TEXT OBIE AT 202-422-4009 TABLES SELL OUT EVERYWEEK SO DONT WAIT. THIS WEEKLY PARTY IS BROUGHT TO YOU BY OBIE THE PROMOTER PROPHECY EVENTS CHRIS STAINLESS CIROCBOY MANNY FOE DIDDY DOLO DORSEY & FRIENDS

#Repost @mrrugs_ with @repostapp. ・・・ @SCRAPPDELEON_NBL GOING AWAY PARTY AT @XSATL #XCESSSUNDAY HOSTED BY @KYRACHAOS THIS SUNDAY NIGHT COME OUT AND SUPPORT BY HOMIE #MRRUGS A photo posted by scrapp deleon (@scrappdeleon_nbl) on Jan 21, 2016 at 7:27pm PST

And with an Instagram update from Scrapp’s brother Sas that appears to depict Scrapp in an orange prison jumpsuit: