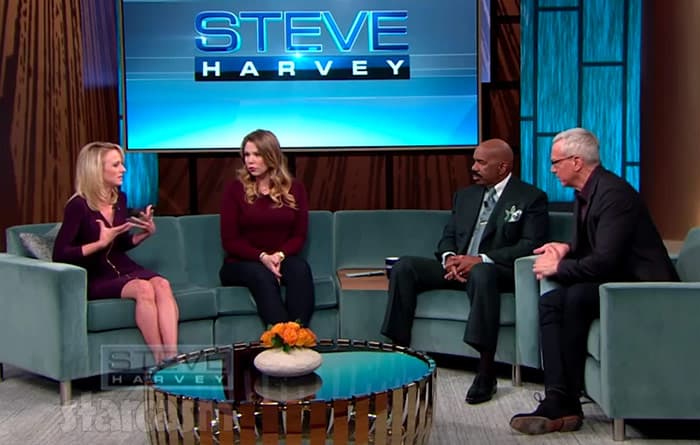 Teen Mom 2 co-stars Leah Messer and Kailyn Lowry will be appearing alongside Dr. Drew on Monday’s episode of Steve Harvey. In three preview clips for the episode, Leah talks about her stint in a rehabilitation facility to treat her anxiety and depression, as well as her current status with ex Corey Simms. Then, both Kail and Leah open up about the inevitable negativity that goes along with being celebrities.

We will start with Leah’s emotional clip about her rehab stay:

“Let me ask you this,” says host Steve Harvey: “You were in rehab, I understand. Was it due to drugs? How were you feeling? What was it?”

“It took me quite some time to decide whether I was gonna go or not,” says Leah. “Everybody where — I’m from West Virginia, and everyone that I was around didn’t quite support me going away, like, they didn’t think it was good. But I knew I was suffering from something. I didn’t know what it was, I just knew that I was suffering and I needed help.”

“It’s just me and my husband’s working out of town,” Leah remembers. “I’m trying to do everything I can to take care of the girls. You know, just whatever I could,” she adds. “My mom lived like two hours away, probably.” 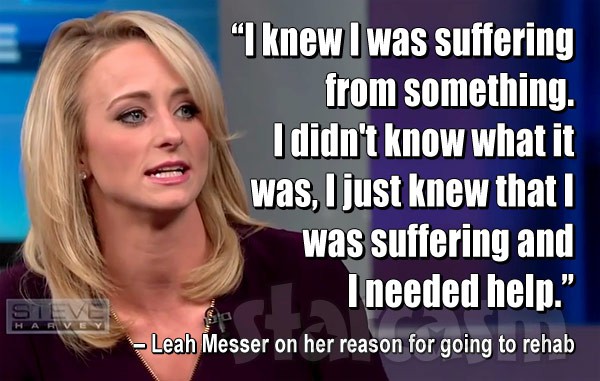 Steve Harvey revisits his original question. “I mean, was it anxiety? What were you suffering from?”

“Yeah,” says Leah. “There’s different tracks, and I was on the anxiety and depression track.”

A clearly emotional Leah says, “I mean, because not even six months ago I probably never would have seen what I see now.”

“In terms of how stressful it was for you?” Dr. Drew clarifies.

“Of how stressful it was.”

In this next clip, Leah talks about her relationship with her ex, and father of her twin daughters, Corey Simms:

“You and your twins’ father,” Steve Harvey begins, “you had a custody battle over the kids? Where is that now?

“Mm hmm,” Leah continues. “Corey and I, we have been coparenting really well. [When] I came back from treatment, they actually looked to me for therapy activities. Like, they didn’t believe in therapy until I came back. So, we’re in a much better place than we was.”

“Can I tell you something?” Steve asks. “Listen ladies, everybody makes mistakes. Everybody. There ain’t a living soul that don’t make mistakes. Please understand, this is not to beat you up. And please don’t beat yourself up. What you cannot do is continue to beat yourself up over it. See, listen to me.” The audience applauds as Steve turns to Dr. Drew. “How many mistakes you done made, doc?”

“Too many to count,” Steve iterates. “I count mine. I’m at eleven million, four hundred fifty-five thousand.”

The next clip is a little less intense, as Kailyn and Leah are both asked about what it’s like to be celebrities:

“You two, you make a lot of headlines, “Steve points out. “Is that difficult for you?”

“It can be,” says Kail. “It can be really difficult. You know, sometimes we just want to be like everybody else and think of ourselves as people who are not on TV, and we want to do our own thing. But, at the end of the day, if we post one picture on Instagram, we might cause World War III with 10,000 comments — you just never know.”

“Leah, what about you?” Steve asks.

“I mean, it’s hard,” Leah says. “People are so judgmental. I, honestly, put my life out there to be a positive influence and really to reach out to people — that is my only desire. There’s nothing else to gain from this, and it’s so painful when people are so judgmental. But, I honestly in the past — I just stopped allowing it to affect me.”

“And also,” Dr. Drew says, “these girls came of age, were on TV, when social media hit. They were the first sort of, really, reality show, or just television personalities to be the object of social media scrutiny. And it has been brutal! It’s been awful.”

Kail chimes in. “I mean, it’s hard because I think people forget when they’re watching the show that we’re actually human beings with feelings.”

“Yeah,” Kail agrees. “And they see characters versus real people.”

“No. listen to me,” says Steve Harvey. “They don’t care. Because it validates them. It gives them a sense of power that they somethin’. And they the most penny ante punk ass people! I mean, really man!”

Be sure to catch the rest of Leah and Kail’s segment on the new episode of Steve Harvey airing Monday — check local listings for air times in your area.