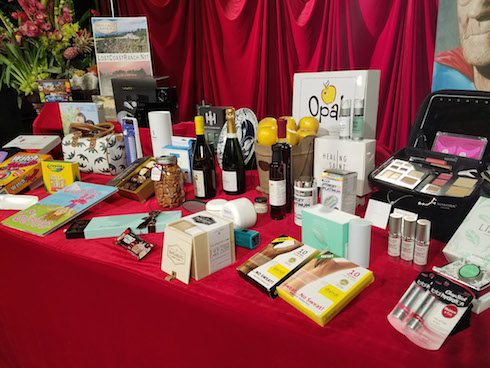 There’s no other way to put it: there is a true shitload of stuff in an Oscars gift basket. I thought it was maybe ten or twelve different things, nestled delicately upon a bed of shredded organic woodpulp inside a Ten Thousand Villages wicker basket. (The other deflating discovery I made is that the infamous baskets do not actually come in a basket.) If I’d known just how many items I would have to track down to write this, I might have just done another Jordyn Woods article instead. But track down I did, and now I can confirm the full extent to which the Oscar gift bags 2019 are a five-figure cosmetic orgy with some gourmet edibles thrown in.

Almost every other rundown of this year’s gift bags is just a long list of stuff, accompanied by some vague rounded dollar value. But a clunky spectacle like this — that’s the spread from the 2017 Oscars in the photo at the top — is more akin to the annual explanation of how much the stuff in “The 12 Days of Christmas” costs. It wants precision. And so:

How much does all the stuff in the Oscars gift bags 2019 really cost?

There are 52 different companies in this year’s swag bag, which is called the “Everyone Wins” bag. (Every nominee in every major acting category gets one, along with all the Best Director nominees.) Those companies pay up to $20,000 to Distinctive Assets, the marketing firm in charge of assembling the goodies, for the privilege of getting their product in the hands of some of the biggest celebrities in the world.

However, there’s no way to know the exact number of items in the bag, since the press release only lists uses a general plural when there’s more than one of something. So I just assumed that a plural meant there were two, except in cases where two seemed insufficient or a different number was more entertaining. If the Oscars are plenty arbitrary (they are), moviegoers get to be, too.

Here’s what’s in the bag:

1. A luxury small-ship adventure with International Expeditions
Cost: $5,698
Nominees get their choice of four destinations: the Amazon; the Galapagos Islands; Iceland; or Costa Rica-Panama. Other trips cost more, but I was once robbed of a chance to go to Brazil for four months, so the Amazon is the only choice.

2. Coda Signature premium cannabis-infused edibles, topicals and concentrates
Cost: $25 for a three-pack
The cost comes with an asterisk: prices aren’t listed on Coda Signature’s website, and the product itself is only available in California and Colorado. I’m going with Dope Directory’s slightly outdated write-up, because why not?

3. An annual VIP membership to MOTA ― LA’s first cannabis-friendly social club
Cost: At least $5,000
There’s no “VIP” listing on MOTA’s web site; $5,000 is the most expensive membership they offer publicly.

4. Private phobia relief sessions with the world’s number one phobia expert Kalliope Barlis
Cost: Approximately $990
A single spot in Barlis’ Phobia Relief Workshop costs $495, so presumably a private session is at least twice as much.

5. Jarritos-filled Yeti Coolers along with a commitment from Jarritos to donate a pallet of their great-tasting flavored soft drinks to a charitable event of the nominee’s choice
Cost: Approximately $154
Jarritos’ website doesn’t list prices. It costs $1 per bottle at the supermercado near my house. Yeti has fancier coolers, but the $130 Tundra has a seat cover and is meant to be sat upon. There is no way to improve that without Tom Haverford levels of electricity camping. I think 24 bottles of Jarritos could fit into that cooler and make for a splendid afternoon outdoors

6. Premier handcrafted A. Junod Absinthe
Cost: $54.99 at the upscale Mel & Rose liquor store in Los Angeles — one of only three places to get it in the US.

8. Personal training sessions with celebrity trainer Alexis Seletzky
Cost: $7 (actual cost unknown)
Apparently you get ten sessions with Alexis. I e-mailed him to ask his rate and haven’t heard back; I can only assume he’s figuring out how high to raise it now that he’s Oscars-approved. In the meantime, $7.

9. AP4GooD limited-edition art T-shirts
Cost: At least $216
All their limited edition stuff costs 95 euro, which is $108 US. The press release says “shirts,” so, double that.

10. One-of-a-kind custom stained glass portraits from Artist John Thoman
Cost: $131 (actual cost unknown)
There are no prices anywhere on Thoman’s web site — nor are there any on the sites of any of the galleries where his work is currently showing. If I could afford his work and wanted to buy some, I would be a bit dismayed. At any rate, Tiffany-style stained glass windows go for around $130 on Overstock. Thoman, a professional artist, presumably charges more.

13. Chocolatines Chocouture Collection
Cost: $28 (probably)
Three of the four selections in this collection cost $28 each; the fourth costs $27.50. That’s some fine hair splitting.

15. An organic field-to-table dinner for two at Flora Farms in Los Cabos, Mexico
Cost: $500 (actual cost unknown)
There actually isn’t a menu with prices on the farm’s official site. What there is, however, is the promise of a Bloody Mary made with heirloom tomato water. Let’s just say the whole meal costs $500 and be happy drinking those all night.

16. A week at the Golden Door luxury wellness resort
Cost: $9,650
Not including tax or gratuities.

17. Chocolate from Good Girl Chocolate
Cost: $39
Their small assorted container is $12 and the large is $27. And “chocolate,” as a collective noun, can be plural. Remember that the next time there are only two truffles left in the box.

18. Happiest Tee luxury t-shirts
Cost: $130
The cheapest items in their shop cost $65. The press release says “shirts,” so I’m assuming there are at least two of them in the Oscars gift bags 2019.

20. It’s A 10 Haircare Miracle hair dryer
Cost: $180
The only hair dryer on their site is the “professional” model, and it costs $180. Pretty expensive for something that’s just going to become another toddler toy.

21. Dental health products from Knotty Floss
Cost: $36
Their floss and tooth picks are $18 each. Presumably you get both.

22. Kusshi makeup bag/organizer
Cost: $159
There are other organizers in their shop, but the “Vacationer full set” is $159. And, given the number of vacations in this basket, no major award-nominated actor and / or director should accept anything less.

23. Le Céline Confidence & Star Appeal luxury eyelashes
Cost: $247.84
Their naming system is a complete mystery and their site’s search function is no help at all. Most of their eyelash sets cost 109 euro each. That’s $123.92 US, and it sounds like “Confidence” and “Star Appeal” are two different things.

26. Mister Poop Emoji Plunger
Cost: $9.99 (actual cost unknown)
No prices here, and presumably the Oscars version doesn’t come with a caddy. There is no way outside of a county fair that this costs ten dollars.

27. Three day-long stay at Luxury Wellness Retreat in Malibu
Cost: Unknown, with raised eyebrows
No price tag anywhere, but in one spot this three-day retreat is scheduled to last from March 30 to March 31. So someone’s not getting their money’s worth.

28. Poolside dinner from Nest Seekers International for nominee and friends prepared by celebrity chef
Cost: Unknown in non-Flavortown currency
There’s not enough information to have any idea. I hope the celebrity chef is Guy Fieri, that the pool is drained and behind a Motel 6, or both.

31. A one-year supply of Oxygenetix Breathable Foundation
Cost: $792
I have it on good authority that an Oscar-level celebrity is probably using this product every single day, and that daily use should translate to about one bottle per month. A 15ml bottle costs $66; multiply that by 12 and you get $792.

34. MZ Skin Lift & Lustre serum and Hydra-Bright eye masks
Cost: $625
I know the press release says something else. But MZ has a product called the “Light-Therapy Golden Facial Treatment Device.” Would you say no if a smiling stranger offered you a $625 golden facial for free? I’m hoping you would. And I’m also hoping that that’s what the nominees are getting from MZ.

35. Pepperidge Farm Milano cookies
Cost: $4
The other day these were going two for $4 at the grocery store. Having bought some, I would now feel stupid indeed if I were also getting one of the Oscars gift bags 2019 this weekend.

36. PETA Agent for Animals Spy Pens
Cost: Unknown
This product does not exist in PETA’s store. I applaud their creation of a truly sneaky Spy Pen.

41. Salix all-natural hair-inhibiting lotion
Cost: $79.99
Hair lotion definitely sounds like a hoax. Has hair lotion been a thing? Do I pay insufficient attention to cosmetics?

42. One-of-a-kind customized fragrances from Sue Phillips of Scenterprises
Cost: $265
That’s what her “Create-Your-Own Bespoke Perfume” will set you back.

43. Soul Candles from Soul Shropshire
Cost: $34.67
These candles are all between 10.50 and 20 Euro each. Since it’s plural, let’s just say one of each and reach for the edibles.

44. Southern Wicked Lemonade all-natural lemonade moonshine
Cost: $9.99 (actual cost unknown)
Every mass-produced alcohol marketing itself as moonshine is a disappointing shadow of the genuine mountainside article. Don’t pay a penny over $9.99 for a bomber of this stuff.

46. The Beauty Book for Brain Cancer by Darren Tieste
Cost: $39.99
There are two editions and they each cost $39.99. We don’t know which you’re getting, but you’re only getting one.

49. Rejuvenating beauty treatments from the New York City-based Dr. Konstantin Vasyukevich
Cost: $30,000
Page Six reports that the “treatments” total $30,000, and that’s all I need to know.

51. WSJ. Magazine with free subscription card
Cost: A firm $1
Their President’s Day sale is $1 for two months. No word on a third. I rule they waive the fee for celebrities.

52. ZuZu Kim Couture Bow Tie
Cost: $75
$75 seems to be their baseline price for a bow tie. But one day a picture of you wearing that bow tie could appear on the company’s site alongside the one they’e running of dapper Larry King. And right now, talking bow ties with Larry King while sitting on my Yeti cooler sounds like the correct way to spend the day, the Academy Awards ceremony, life.

Total cost of tallying the total cost of the Oscars gift bags 2019: Eyestrain and two bags of Pepperidge Farm cookies.

What is Kanye West’s real net worth, and will he use it to build those Star Wars houses?

Is NeNe coming back for RHOA Season 13, or is Bravo forcing her out?