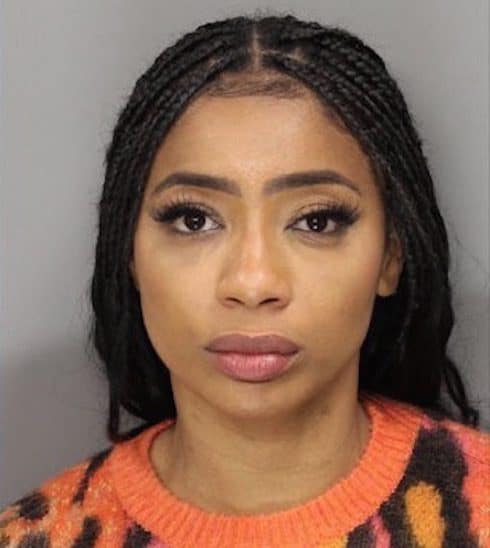 Even by Tommie’s standards, her latest arrest didn’t take long. Less than 24 hours after the Love & Hip Hop Atlanta star was booked on six charges stemming from her alleged assault of a middle schooler at the child’s school, Tommie was arrested again. This time, the charges include obstruction of an officer stemming from the claim that Tommie hid in the attic while the police searched for her.

This story is threatening to get confusing, so we’ll take you through it day by day. The first of Tommie’s current legal problems began on Tuesday, October 16th. According to an arrest warrant sworn out by the Smyrna Police Department, Tommie screamed obscenities while attacking a student at Griffin Middle School. Security cameras apparently captured the entire incident: Tommie is said to have smashed an unidentified girl’s head into a locker, then dragged her through the hallways by her hair while slapping her hair.

(It’s being reported by several blogs that the victim was actually Tommie’s 14-year-old daughter Samaria. However, neither the police nor the middle school have identified the victim of Tommie’s attack. And the reason why Tommie allegedly attacked the girl remains unclear.)

Tommie was arrested on child cruelty and assault charges on Tuesday night. She was released from the Cobb County Adult Detention Center at 4:41 on the morning of Wednesday, October 17th, after posting a $27,720 bond.

Now, according to a new report from Atlanta’s WSB-TV, it appears that Tommie was arrested once more, on the evening of the 17th, or around 24 hours after her first arrest this week.

Their report says Tommie was arrested at her Smyrna home “around 8 PM” Wednesday night, and charged with both aggravated stalking and obstruction of an officer. It’s not immediately clear why the police had been called to Tommie’s house, though presumably it had something to do with the aggravated stalking charge. The second charge was added after Tommie hid in the attic of her home and “allegedly refused to come to the door.”

The mug shot at the top of the article is Tommie’s most recent, taken upon being booked into the Cobb County Adult Detention Center last night. And below is the relevant portion of her booking record. Though Tommie’s bail has been set at $5,720, it has yet to be posted; according to Cobb County records, she’s still incarcerated. 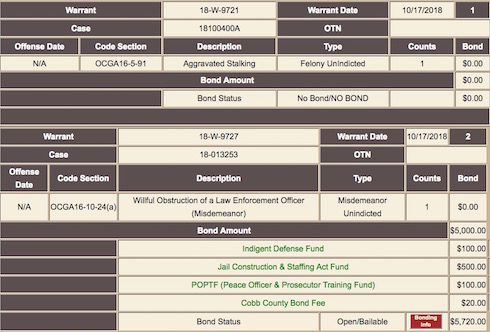 Last night’s arrest was Tommie’s fifth of 2018 and her 22nd overall. You can see a complete list of Tommie’s arrests here.