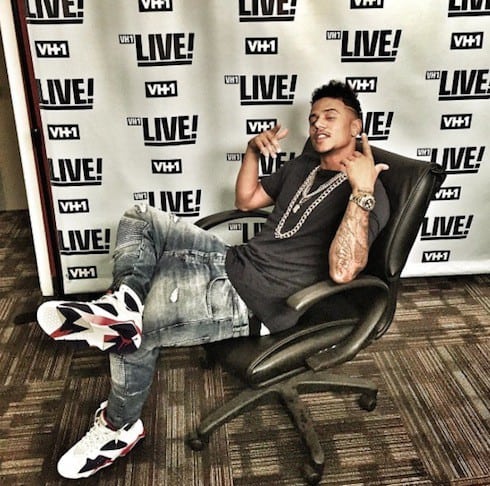 Who did Lil Fizz’s girlfriend cheat with? It can be impossible to keep up with the many ins & outs of this particular, ever-expanding Love & Hip Hop Hollywood love triangle (and, given the new additions, it’s not even a triangle anymore!). Fizz made things harder on himself (but much better for fans) with a recent interview in which he dropped some explicit details about his assorted forays.

Of course, this all got started way back in LHHH Season 1, when Fizz’s girlfriend Amanda cheated on him with a mystery man known (at the time) as Mr. Miami. Following their breakup, Fizz and Moniece tried it on once more, for the sake of their son, only to have that attempt fall apart when Moniece became engaged to Rich Dollaz. Then *that* fell apart, and Moniece and Fizz tried to keep things civil even though Fizz was technically dating Nikki Baby.

Which brings us to the first part of the current drama: namely, that when Fizz was recently asked to compare Moniece Slaughter and Nikki Baby in bed, he should have smiled, laughed, and said “Next question.” (Or just let Moniece answer for him.) Instead, though, he opened his mouth…

…and actually compared the two, with Moniece by his side the whole time, because that is totally how healthy relationships are formed. The verdict? Moniece has the better “oral game,” but Nikki is more fun after the foreplay’s done, since “when you got a little more to work with, it’s a little more fun!”

Of course, Nikki couldn’t let Fizz’s words go without an answer–though she knows how to withhold the crucial information for the sake of good drama. When asked for a response to Fizz’s words, here’s how she carried herself:

“Honey, I’m not worried about nobody’s sex life but my own,” Nikki said, as polite as could be. “My sex is amazing, okay? I don’t need nobody to tell me, ’cause I know this for myself.”

Then a viewer on Twitter chimed in, wanting to turn the tables and ask Nikki to compare Fizz and Safaree. “Safaree,” Nikki said, after only the briefest hesitation. When prompted for more of an explanation, Nikki smiled sweetly and said “I can’t tell you unless you’re gonna write a check.”

(Photo credits: Who did Lil Fizz’s girlfriend cheat with via Instagram)