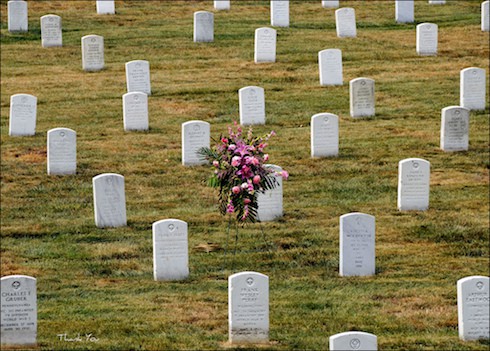 The cemetery theft of over 150 veterans’ headstones has led to the dismissal of an employee who often bragged about taking them. Kevin Maynard, a Rhode Islander and former worker at the state’s Veterans’ Cemetery, has pleaded guilty to taking the headstones over a period of years.

Maynard, 59, pleaded guilty to only one count of cemetery theft in the form of a theft of government property charge after the Veterans Administration and the Rhode Island State Police discovered “at least” 150 grave markers at Maynard’s home in Charleston RI.

Investigators also found American flags and other cemetery paraphernalia believed to be the property of the Rhode Island Veterans’ Cemetery, where Maynard had worked since 2005.

Word began to get around about possible illegal activity on Maynard’s part when co-workers and friends heard him bragging about taking damaged headstones home for his own personal use–even though, as an employee of the cemetery, “he knew proper disposal procedures.”

The court affidavit said that proper procedure for disposing of a damaged headstone involves taking it to a granite crushing facility. When investigators searched Maynard’s home, though, they found most of the 150 headstones lining the floor of a storage shed and in two garages on his property.

The Rhode Island State Trooper who wrote the official report said “he observed automotive fluids and debris scattered over the gravestones.”

The plea deal that Maynard struck with the Department of Veterans Affairs requires him to perform 500 hours of community service and be on probation for one year.

Maynard resigned from his ten-year position with the cemetery once the Veterans’ Affairs investigation of cemetery theft went public in May.