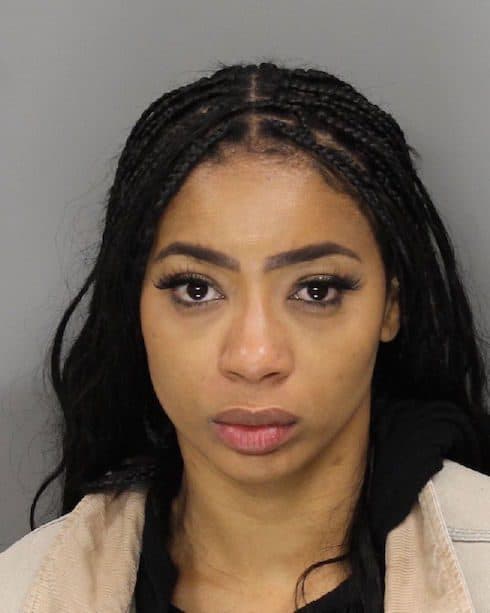 Love & Hip Hop Atlanta star Tommie’s 21st arrest may also be her most shocking. The 34-year-old — whose real name is Atasha Jefferson — was taken into police custody earlier this week after apparently assaulting a middle schooler at the child’s school.

UPDATE – Less than 24 hours after the above arrest, Tommie was arrested again, this time for charges that include aggravated stalking. Click here to read that report.

Before we go any further with the story of Tommie’s alleged assault of a middle school, we should point out that some blogs are reporting Tommie attacked her oldest daughter Samaria. However, the victim has yet to be identified and the reason why Tommie was at a middle school in the first place remains unclear.

For those of you keeping track at home, the LHHATL Tommie assault arrest is the reality star’s fourth one this year. This past may, Tommie was arrested on two charges of battery; a couple of months after that, Tommie was booked for allegedly striking a valet while under the influence of alcohol (in violation of her parole).

And last month, Tommie surrendered to Fulton County police to serve a two-day jail stint as part of a plea bargain from her 2016 DUI arrest. (As we mentioned above, Tommie has been arrested at least 21 times in total — click here for her full arrest record.)

But the latest LHHATL Tommie assault arrest is maybe the first time we’ve been truly shocked by Tommie’s alleged actions. According to the Smyrna Police’s arrest warrant — first reported by the Marietta Daily Journal — Tommie attacked a “juvenille under the age of 17” this past Tuesday at Griffin Middle School, shortly before students were to be dismissed for the day.

The warrant states that Tommie smashed the student’s head into a locker and dragged her down a hallway by her hair, “screaming profanities” all the while. Tommie was apparently so “loud and boisterous” that “several members of the school faculty” came out of their classrooms to investigate.

Most damning of all for Tommie is the fact that the school’s security cameras appear to have captured the entire incident.

Here’s the relevant paragraph from the police report:

All told, Tommie faces six seprate charges from the alleged assault. The first two — aggravated assault and cruelty to children in the first degree — are felonies. The remaining four are misdemeanors: one count of disrupting operation of a public school, and three counts of simple battery.

Smyrna Police spokesman Sargeant Louis Defense would not discuss Tommie’s relationship to the student. However, we do know that Tommie was released from the Cobb County Adult Detention Center at 4:41 Wednesday morning, after posting a $27,720 bond. So far, she has yet to make a public statement on the matter.