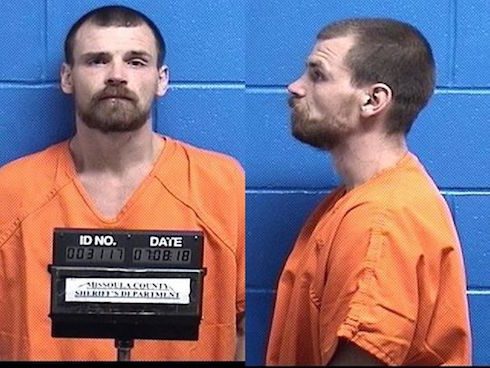 A 32-year-old Montana man has been apprehended after leaving a five-month-old baby in alone the Montana mountains for at least nine hours because — as the prosecution in his case put it — “the baby was very heavy.” Francis Carlton Crowley later broke down in court after hearing the charges against him read aloud.

According to an official release by the Missoula County Sheriff’s Office, authorities were first alerted to the Montana baby abandonment case when they received calls about “a male suspect who was acting strange in the Lolo Hot Springs area,” about 40 miles west of Missoula. Deputies then discovered that Crowley, who had been “threatening people saying he had a gun and reaching in his pockets,” had also abandoned the five-month-old “somewhere in the mountains.”

Interrogating Crowley revealed little, since he “appeared to be under the influence of drugs.” So a massive manhunt, involving Missoula County Search and Rescue, the Montana Highway Patrol, the Bureau of Land Management, and the US Forest Service, fanned out into the surrounding terrain. Six hours later, at aroud 2:30 in the morning — and with the temperature hovering around 46 degrees — one deputy came upon the child:

After more than 6 hours of searching on foot, a deputy heard the faint cry of a baby. He followed the sound and found the baby alive, face down, buried under a pile of sticks and debris. Clothed in only a wet and soiled onesie, the baby was found at approximately 2:30 am, putting the infant in the woods unattended and in the cold (approximately 46 degrees) for a minimum of 9 hours. The baby was transported to a local hospital and is in good condition.

The Missoula County Sheriff’s Office also shared a picture of the abandoned baby gripping the finger of Ross Jessop, the deputy who rescued him:

The Associated Press later reported that Deputy Jessop “followed a trail of scattered toys and baby items” across the mountain — but only found the baby after hearing “a faint whimper.” Jessop added that he nearly stepped on the baby before “abandon[ing] his police training and any thoughts of preserving evidence and scooped up the cold, soiled baby.”

Crowley appeared in court on Tuesday, though he did not enter a plea. USA Today reported that Crowley had been living with the baby and the baby’s mother “in a camp near the hot springs in Lolo National Forest,” and that “Crowley’s relationship to the baby wasn’t immediately clear.” Crowley confessed that he abandoned the baby because it was “heavy,” then told the judge in his case that “he loved the child” and “pleaded [it] not to be taken away.”

Crowley has been charged with child endangerment; other charges are reportedly forthcoming. His bail has been set at $200,000.

Devotées will recall that this is the second Florida-style true crime case to come out of Montana in three weeks. Late last month, a 19-year-old Montana woman was arrested after forcing an ex-boyfriend to have sex with her at machetepoint, then holding him hostage in his apartment.