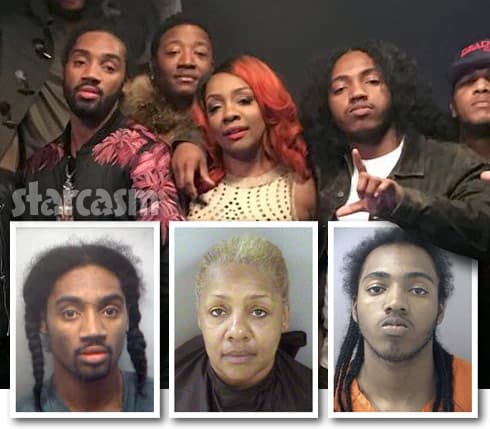 Love & Hip Hop creator Mona Scott Young has a knack for casting dramatic characters, but her most recent addition to the cast of Love & Hip Hop: Atlanta may turn out to be the OG-est of them all! According to a recent press release, Karen “KK” King and her hip hop musician sons Scrapp DeLeon and Sas will be joining the ATL crew this season. That may not seem too crazy, but ALL THREE OF THEM were indicted in the brutal beating and kidnapping of Karen’s ex (and Sas’ father) Lyndon Baines Smith in 2012. Karen was the last of six total to be arrested, and, while she was on the lam, she was featured on America’s Most Wanted!

We will get to the unfortunate circumstances that led to Karen King and her sons’ arrests in a minute. First, here is a recent photo of Karen as well as the details on the addition of her and her sons to the cast from VH1: 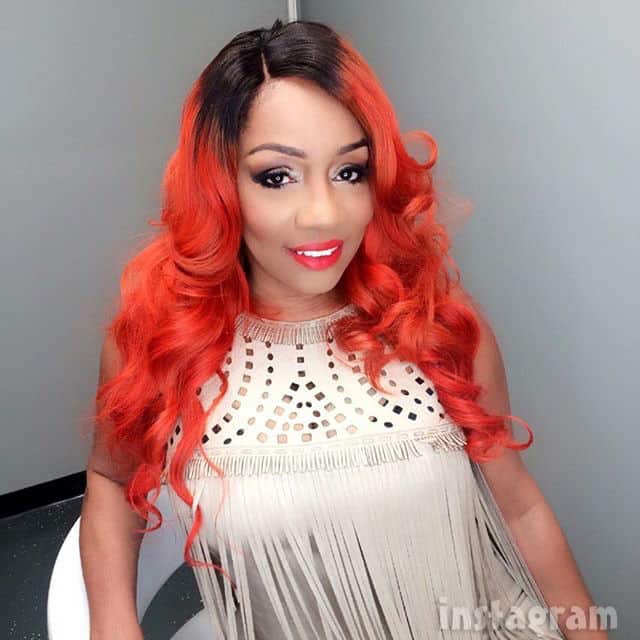 New to the scene is Karen “KK” King. KK is not your average mother – she was previously the vivacious, outspoken “momager” to her sons Scrapp DeLeon and Sas. Through her musical connections, KK brokered major deals for her sons with Akon’s Konvict music and T-Pain. Additionally, she is a longtime friend of Stevie J, who she not only considers a lifelong friend, but also her brother and uncle to her sons.Sas & Scrapp set the rap game ablaze as teenagers in a group called Da Razkalz Cru. These days, Scrapp manages Sas to reestablish him as a solo artist. But for Scrapp, relationship drama with girlfriend Tommie, who isn’t shy when it comes to speaking her mind; and Tiara, the mother of his son, is distracting him from the music.

Tiara is the perfect combination of brains and beauty. She is a reserved corporate dynamo by day and a sexy club vixen by night. Don’t let her prim and proper exterior fool you; Tiara is not one to be reckoned with. Tommie is a charismatic model who is known for her unpredictable antics, rapid-fire wit and her relationship with Scrapp. One thing is for certain, beef between these two may be headed for disaster as they battle it out for Scrapp’s heart.

As far as the crime, there is a lot of misleading information out there — including numerous sites reporting that Lyndon Baines Smith died as a result of the attack. Though Lyndon did not die, he probably would have, if not for a traffic stop that led to the discovery of his body in a car trunk. Here’s the full story, as compiled from the most reliable sources, in timeline form:

According to police, when Lyndon arrived at Karen’s home, he was jumped by a group of people and brutally beaten. His body was then placed in the trunk of his own car–a 2004 Mercury Sable–and Melvin Floyd, 23, began to drive Lyndon back to his home in Alabama, intending to leaving him there. 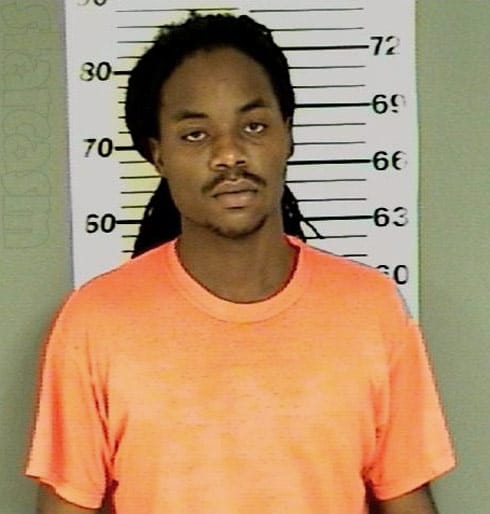 MARCH 8, 2012 – Melvin Floyd (mug shot photo above) was pulled over at approximately 4PM in Cleburne County, Alabama during a routine traffic stop while traveling west on Interstate 20. According to Cleburne County Deputy Lance Willingham, Melvin displayed suspicious body language and did not identify the owner of the vehicle. Police searched the vehicle and discovered Lyndon Baines Smith in the trunk, badly beaten. Lyndon was transported to the University of Alabama-Birmingham Hospital where he received treatment for multiple rib and facial fractures. As a result of the attack, Lyndon was also blinded in one eye.

“The driver consented to the search and the officer was actually shocked when he opened the trunk to find a man lying there beaten and bloodied,” Cherokee County police Lt. Jamie Gianfala said later. “Mr. Smith was going to be transported in the trunk to Alabama to an apartment complex and left to fend for himself,” he added. “Without medical attention, the way he was beaten, the severity of it, he would have passed.”

Here is a photo of Lyndon being attended to by EMTs after being taken out of the trunk of the car and before being taken to the hospital: 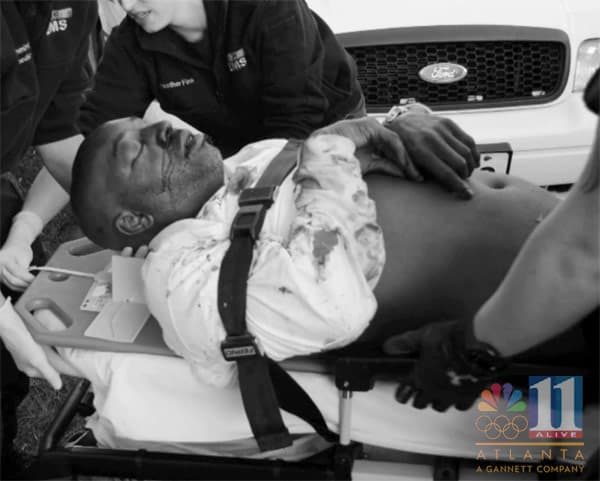 Melvin Floyd was booked and charged with kidnapping with serious bodily injury, aggravated assault, and theft of a motor vehicle.

MARCH ?? – After being informed that the beating of Lyndon Baines Smith most likely took place at a home in the BridgeMill community near Canton, Georgia, Cherokee County police searched the residence. They found evidence of the altercation, along with evidence that there had been an attempt to cover it up. 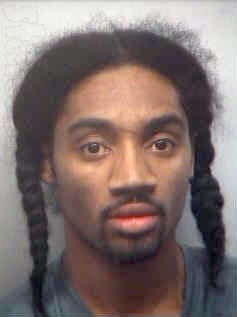 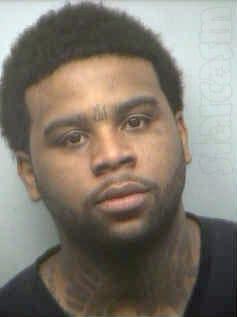 MARCH 29 – Karen’s son Will Cortez Robinson (aka Scrapp DeLeon), 24, and Robert Silva Jr., 22, were arrested and charged with aggravated battery, aggravated assault, and kidnapping with bodily injury. Those are their mug shot photos above — Scrapp DeLeon is on the left and Robert is on the right.

MAY 12 – Karen and Lyndon’s son, 17-year-old Alonte Lyndell Smith (mug shot photo below left), is arrested for his involvement in the beating of his father. 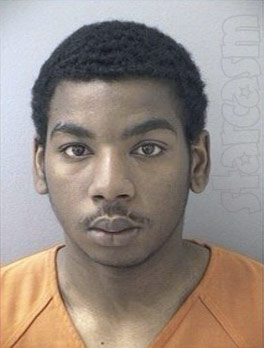 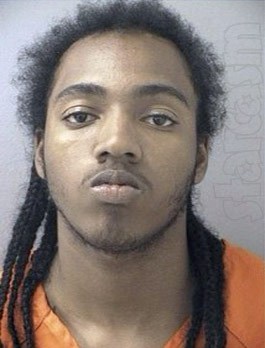 JUNE 8 – Karen and Lyndon’s older son, Lyndon Ahlik Smith (aka Sas), 23, is arrested in Miami, Florida (mug shot photo above right). “It is unknown to us why Smith was in Miami,” Cherokee County Sheriff’s Office spokesperson Lt. Jay Baker said at the time. “The U.S. Marshal’s Office located him on our warrants and placed him into custody.”

JUNE 27 – Karen Lynn King is the only remaining suspect in the assault not in custody, and Atlanta’s WXIA features her as their “Fugitive of the Week.”

OCTOBER ?? – Karen Lynn King is featured on an episode of America’s Most Wanted.

APRIL 6, 2103 – Karen Lynn King, 52 at the time, is arrested in Vero Beach, Florida thanks to an anonymous tip. “King was at the home of her boyfriend, Aziz Munir, who was renting a condo at the Dunes House in the Sea Oaks community in the 8800 block of N Sea Oaks Way,” reported WPTV. “[Indian River County Sheriff’s Office spokesperson Thomas Raulen] says King was wanted for crimes in Alabama and had warrants for aggravated assault with intent to murder, aggravated battery with intent to disfigure, kidnapping, armed robbery, and various drug related charges.” 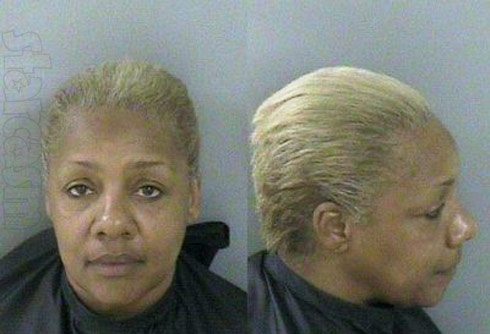 As you can tell from Karen’s mug shot photos above, she changed her hair color to blonde after her appearance on America’s Most Wanted. Police also say that Karen was “in possession of several forms of ID and credit cards which were in names other than her own.”

APRIL 8 – According to Cherokee County Sheriff’s Office spokesperson Lt. Jamie Gianfala, all six persons arrested in connection with the assault and kidnapping of Lyndon Baines Smith were charged and indicted for aggravated assault, aggravated battery, and kidnapping with bodily injury. 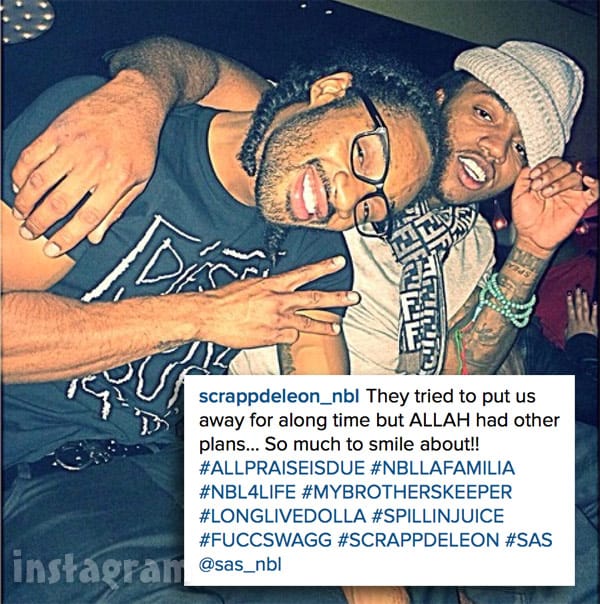 As amazing as this story is up to this point, perhaps the most amazing part is that Karen, Sas, and Scrapp DeLeon were all later released–and, apparently, all the charges against them were dropped! (You can see Sas and Scrapp seemingly very proud of that fact in the photos above and below.) It’s amazing how much information you can find about an arrest, but there is nothing much at all about their release, other than a couple unconfirmed references to the District Attorney dropping the charges due to insufficient evidence. I wish I knew more, but I could find nothing online about it. Perhaps more will be revealed on Love & Hip Hop: Atlanta! 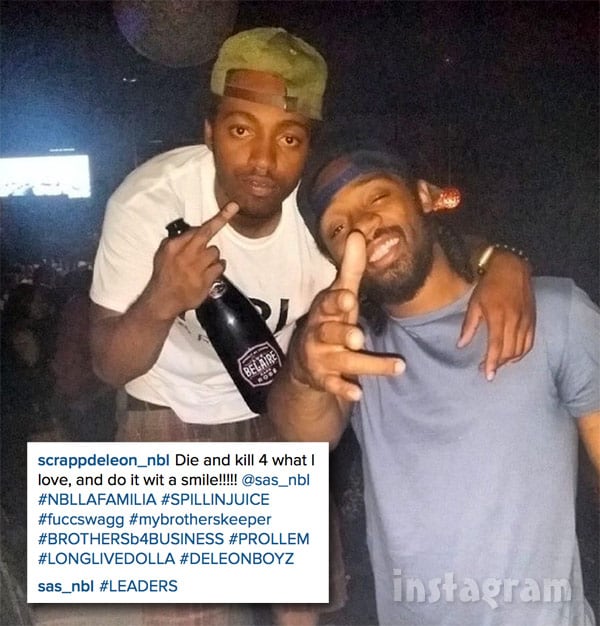 UPDATE – Sas just launched his website, and his bio sheds a little light on the arrest:

SAS was soon hit with another tragic setback after a family dispute that left him facing life in prison. He spent a year in jail but bonded out and spent another year on strict house arrest. While on house arrest, he fell back on his roots by turning his closet into a make-shift studio. Putting his ambitions on full display, he penned his recent experiences and conceived his mixtape Out On Bail. During this time, he discovered he had a son and was jolted once again with motivation to go harder. Following his conviction, he released Follow My Lead on Dolla’s birthday as a tribute to his contribution to music.

A year in jail before bonding out, and then a year on house arrest? That sure seems like a light sentence for what was done to Lyndon Baines Smith. But, if they couldn’t prove he participated in the attack, then I’m guessing he could have struck a pretty sweet deal.

Stay tuned: while researching this story I ran across lots more info on Karen, Sas, and Scrapp!!

UPDATE – Scrapp DeLeon is currently in jail! Like, right now! Click here for all the details. (No, it’s not related to the incident involving Lyndon.)

UPDATE – Karen King was arrested yet again! Click here for the details!

On a random side note, this isn’t the first time we’ve delved into the background of a reality star previously featured on America’s Most Wanted. Click here to check out the incredible story of Gypsy Sisters matriarch Lottie Mae Stanley!