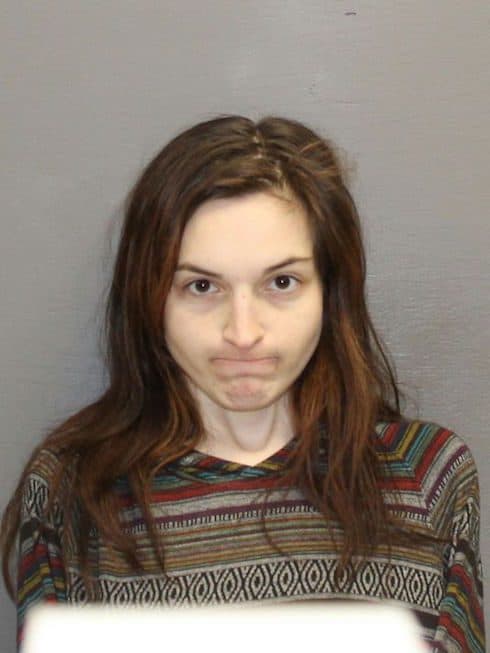 Samantha Mears, a 19-year-old Montana woman with a history of domestic violence, has been arrested and charged with six new crimes after ambushing her boyfriend and forcing him to have sex with her while she held a machete to his throat.

KTVQ out of Billings MT appears to have been the first to report the story. According to their article, Samantha “entered” an ex-boyfriend’s residence while he was away. When her ex returned, Samantha broke out the machete, and ordered the man to get on his bed and strip naked.

Mears “then removed her pants, climbed on top of the man, and engaged in intercourse.” The ex-boyfriend would later tell police that Samantha “continued holding onto the machete during intercourse.” But the fun didn’t stop after sex: the Great Falls Tribune further reports that Samantha’s ex-boyfriend tried to push her off, only to have her bite him on the arm and start an argument, during which the Montana woman with machete “ripped a large piece of trim off the wall and urinated on the bed.”

The ex managed to escape by by calling 911 but pretending to have a conversation with a friend named “Doug” the whole time. The ex — and his sister, who was apparently in another part of the house the whole time — were able to flee “just as police arrived.”

KTVQ reports that Samantha’s six charges include aggravated burglary and assault with a weapon, both of which are felonies. Her four misdemeanors are assault of a partner or family member; one count of unlawful restraint; and two counts of criminal mischief.

(One thing that isn’t immediately clear: Why Samantha Mears isn’t being charged with rape. Though we don’t have all the details in this particular case, it certainly sounds like “held a person at machetepoint and forced him to have intercourse on pain of death” meets at least the dictionary definition of rape.)

In addition, the Tribune‘s article notes that Great Falls police said “Mears seemed to be suffering from some sort of mental illness,” which they based on Samantha telling them her ex had actually kidnapped her, then “gave her a machete to protect herself.”

Though it was probably just a joke, we’ll also throw out there that Samantha Mears’ public Facebook profile (last updated on New Year’s Eve 2015) lists her last place of employment as Elf Preschool: 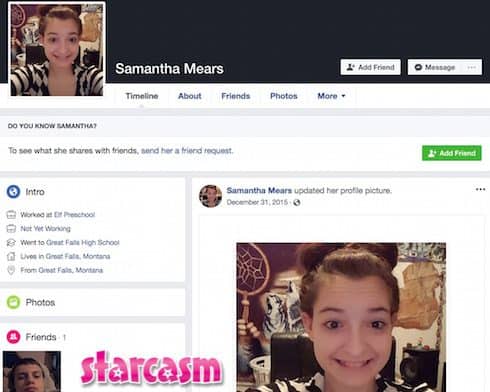 Samantha’s priors include felony strangulation, with which she was charged this past April following an argument with a different partner, also at that partner’s home. Court documents in the case state that Samantha “had grabbed [the man’s] hair and hit him in the face,” then “began strangling him by pressing her thumbs on his windpipe.”

Prosecutors have asked that Samantha’s bond be set at $50,000.