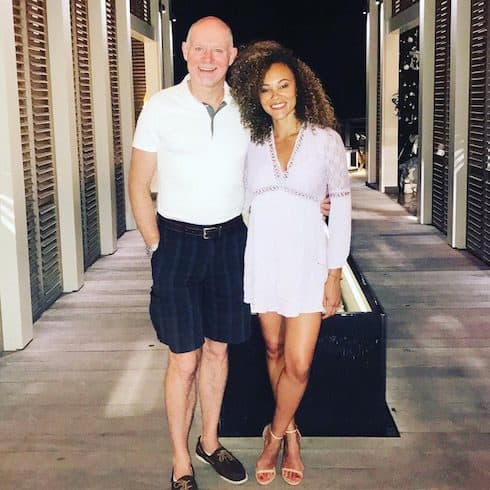 We’re only a couple of months away from the RHOP Season 4 premiere, and info about the new season is starting to get out. Among the fresh tea is the fate of Michael Darby, Ashley’s sometimes-mysterious, sometimes-controversial husband, who faced sexual harassment allegations in a lawsuit brought by a Real Housewives of Potomac crew member last year.

As we reported at the time, Michael cameraman Orville Palmer claimed Michael Darby “grabbed and groped” Orville’s butt while he was filming scenes for RHOP’s new season last September. Orville further claimed that “as [he] turned around [Michael] smiled and gave me a flirtatious look,” forcing the cameraman to “put his camera down and [tell] Darby to stop.” (This was allegedly not the second unwanted encounter between Michael and Orville, nor was it the first time Michael Darby had been linked to allegations involving other men.)

As a result of the lawsuit, Bravo suspended Michael from The Real Housewives of Potomac indefinitely. Ashley Darby took a strong stand in her husband’s defense on social media, and, for a brief period, it looked like both their futures on the show’s cast might be up in the air.

However, before long, insufficient evidence meant the lawsuit was dismissed. According to the Washington Post, Orville’s lawsuit didn’t pass the system by which Maryland reviews complaints “for certain kinds of offenses” to see whether those complaints might merit prosecution. From the Post:

“The case was dismissed due to insufficient evidence,” said Ramon Korionoff, a spokesman for the Montgomery County State’s Attorney’s Office. “The complaining witness states there were no witnesses who actually saw the incident.”

In Maryland, people can file for criminal charges for certain kinds of offenses, as was the case here, he added, and the State’s Attorney’s Office has a process by which the complaints are reviewed to see if prosecution is warranted. In this case, the office decided not to pursue the allegations.

Not long after the case was dismissed, Ashley took to Instagram to share a photo of herself and Michael Darby kissing in the photobooth at the holiday party thrown by Truly Original, The Real Housewives of Potomac‘s production company:

Both Truly Original and Bravo have since confirmed that Michael Darby has resumed filming for RHOP Season 4. And we’ve since learned that Michael’s lawsuit will be featured as part of he and Ashley’s storyline for the new episodes, though we don’t know exactly how prominent it will be.

Bravo has yet to announce the RHOP Season 4 official premiere date. However, the last two seasons premiered on the first Sunday in April of 2017 and 2018 respectively. So we’re betting that the show returns on either April 7th or March 31st of 2019.