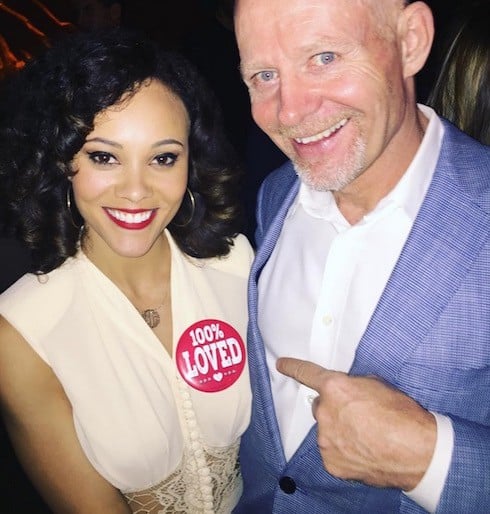 Ashley Darby’s husband was a curiosity to fans throughout RHOP Season 1. The 29-year age gap between Ashley and Michael Darby gave rise to all sorts of allegations–most prominent among them that Michael was secretly gay (or bi-sexual). These allegations first rose to prominence with “Beach Vacation,” the sixth episode of Season 1, after Ashley and the other Housewives spotted Michael at a gay bar.

Nothing else happened at the time, but now, a pair of new reports alleges that Michael has had an affair with another man. And, though the report was initially a bit short on details, a string of explicit photos linked to the allegations has RHOP fans atwitter. Noted gossip blog Fameolous was the first to make the claim, doing so in a pair of eyebrow-raising tweets earlier this week. According to Fameolous, Michael had an “alleged” fling with a “younger black guy” this past October, during a stay in London. However, none of the photos linked to the allegations show Michael’s face, and the one screencap of a text message between the two supposed lovers doesn’t use Michael’s name (or the name of the other man).

Because it contains nudity, we can’t show you the first of the Fameolous tweets; you can see it for yourself by clicking here. Here’s the second of the two:

Since then, the man who says he slept with Michael apparently fleshed out his story. The unnamed man claims he spent two days with Michael in his London hotel suite, and had no idea Michael was married until two weeks after the fact, when he happened upon a RHOP rerun on television.

Update- Incident occurred on October 19th. I spoke to this guy on Grindr and he said he was in London on business and was staying at one of the most expensive hotels in London and he asked me to come and meet him so I did and i spent two days at his hotel suit with him and everything with totally cool then like 2 weeks later I turn on my T.V and see him married to some chick from Potomac called Ashley. He told me not to say anything and he bought me a Cartier love charm and Chanel aftershave. His name is Michael Darby. I did not expect any gifts nor did I ask for them and also my Cartier love bangle cost $5000☕️ I will upload a few receipts on Twitter so go there?

It’s not immediately clear if the anonymous man contacted Michael after finding out he was married, or was given gifts to keep silent before their two days were up.

Neither Ashley nor Michael have responded publicly to the allegations. On the contrary: as the story was breaking, Ashley shared a pair of photos urging her followers to get out and vote:

Hustle to the polls baby cakes! ?? No cool sticker because I did an absentee ballot, but #snapchat had my back ?? #doyourpart #proudtobeanamerican #rhop

The Real Housewives Of Potomac Season 2 is expected to air sometime in early 2017.

Why is The Real Housewives of Potomac‘s cast all black? The show’s origins, explained