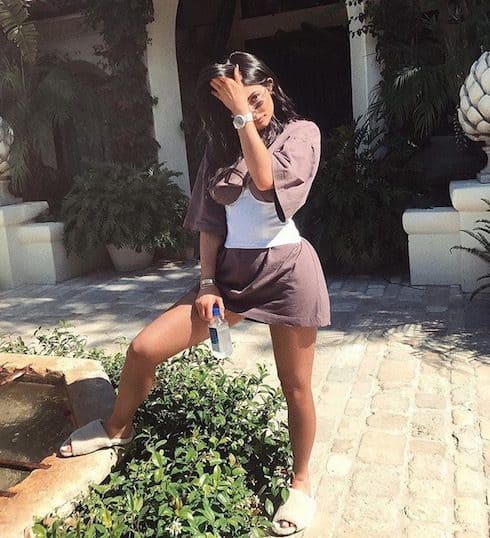 It’s a never-ending stream of new and questionable Kylie Jenner pregnancy gossip these days, as the 20-year-old heads into the final stretch of her still-unconfirmed pregnancy. The latest updates involve new talk about Kylie and baby daddy Travis Scott’s relationship; Khloe Kardashian keeping coy about Kylie’s uterine status on Ellen; and an over-the-top list of Kylie’s alleged delivery room must-haves.

We’ll begin with the pushback on rumors that Kylie Jenner and Travis Scott are no more, since the story that Travis allegedly dumped Kylie on Christmas Eve seems to have touched a nerve with her PR people. “Sources” have since told none other than People that the two lovebirds are in fact still together, and that any report to the contrary is simply untrue.

Though none of the sources in question were willing to go on the record (which is, of course, standard) or give quotes to the publication (which is not), People nonetheless says it “can confirm that the couple is still together.” The quotes that People does use in its article come from earlier, related stories about how Kylie “wants to keep her pregnancy private” and is eager “to reveal things on her own terms” and “disappear and be out of the spotlight and focus on her health and happiness.”

(Another stray quote from People’s article seems to suggest that Kylie either got pregnant because she “just wanted to take six months off” or that she was eager to use the pregnancy for that reason once she found out she was with child. I don’t think anyone can fault the youngest member of the Kardashian family, who’s basically lived beneath a spotlit microscope for her entire life, wanting a bit of a breather. Still, it’s interesting that that particular quote hasn’t gotten more attention.)

As for the recent conspiracy theory that Kylie may have actually already given birth to her and Travis’ baby girl? Well, believe it or not, the topic of Kylie’s pregnancy just so happened to come up during Khloe Kardashian’s appearance on Ellen earlier today, and Kylie’s on-the-spot representative did about as good a job parrying Ellen’s interrogative thrusts as you would expect on daytime TV. Which is to say that she clammed up like a sitcom spy who knows a torture tickling is just around the corner. See for yourself:

Finally, while we’re on the subject of fun nonsense, enjoy this debunking of a completely absurd diva-esque report on Kylie’s alleged delivery room demands. Gossip Cop takes OK!’s most recent Australian edition to task for what it says is pure fabrication, but that doesn’t mean you can’t have a good time reading about Kylie “request[ing] a completely stocked snack bar and light grey 1000-thread count sheets for her birthing room” at Cedars-Sinai Hospital in LA.

Beyond that, Kylie apparently also “wants to rent out the entire floor for her own privacy” and is demanding that “all nurses and doctors involved in the birth hand over [their] phones to avoid photos leaking on the internet.” I don’t know how likely it is that nurses and doctors are on their phones while in the middle of their complicated and demanding and legally sensitive jobs, but, if there’s one person in the world who believes it’s as common as Snapchatting from the bathroom at the Met Gala, it’s got to be Kylie Jenner.