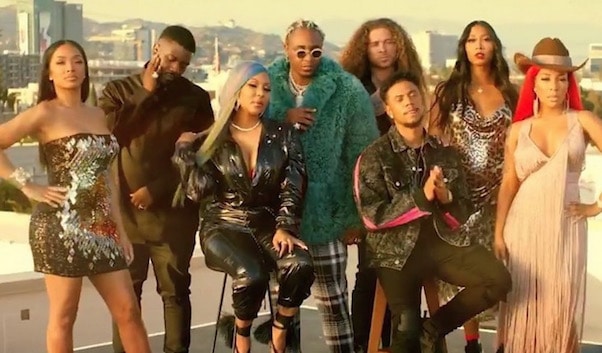 The first promos for LHHH Season 6 are here, and, as we’d previously reported, it looks like the season will feature a heavy dose of returning cast members Apryl Jones and Lil Fizz. But one new detail in the first teaser trailer for the new season has fans wondering: is Apryl Jones pregnant with Lil Fizz’s baby?

We’ve screencapped a still from the trailer above. Apryl is on the right side, standing between Fizz and K. Michelle — and seemingly sporting quite the prominent baby bump. As Apryl’s followers on social media know, she hasn’t sported anything remotely resembling a baby bump in any recent photos. But, as Love & Hip Hop Atlanta fans know very well, it’s not too hard for a reality star to hide a pregnancy until the new season drops. Just ask Jessica Dime, who simply cut back on her social media presence and shared old photos or chest-up photos exclusively while pregnant with fiancé Shawne Williams’ baby ahead of LHHATL Season 7.

And, as we also know from Fizz’s ex Moniece Slaughter, it’s entirely possible that Apryl has been pregnant with his baby for several weeks and is just keeping things on the DL. So either the LHHH Season 6 trailer accidentally dropped a huge reveal about Apryl’s uterine status, or Apryl just had too much to eat before the shoot, right?

As it turns out, this latest incarnation of Apryl Jones pregnant could well be the powers that be at VH1 putting on a good show for us. As the ever-reliable @BestRealityBlog pointed out, Apryl went on IG Live shortly after the trailer dropped and the gossip started swirling. During the stream, she for no particular reason started showing off her abs and thin frame, possibly in a huge wink to the whole situation.

Here’s a side-by-side comparison, via BestRealityBlog:

For now, at least, the most likely scenario is probably that Apryl was indeed just wearing a little prosthetic help under her dress. But don’t think that her alleged pregnancy won’t come up during Love & Hip Hop Hollywood‘s new season — and don’t think that just because Moniece Slaughter is absent from the first trailer that she won’t be present, either. Moniece recently addressed the news that Apryl and Fizz have moved in together and are getting serious by telling the pair that the way the three of them can “be the biggest, bestest blended family ever” is if Apryl and Fizz simply “Mind your f*cking business.”