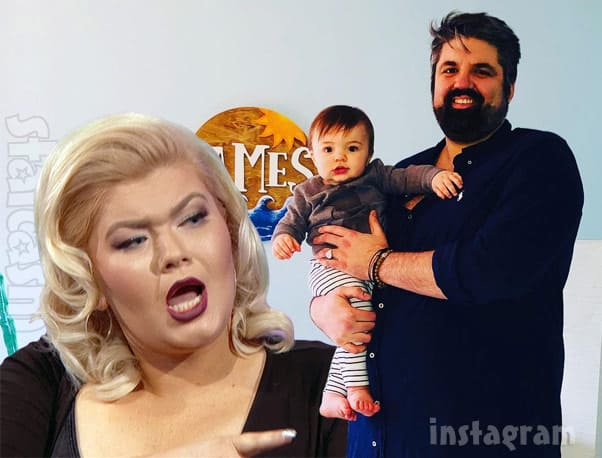 Teen Mom OG star Amber Portwood was arrested in Indiana on July 5 and charged with domestic battery after she allegedly assaulted her boyfriend Andrew Glennon while he was holding their one-year-old son James. We now have more information on the attack, as well as Andrew’s claim that this wasn’t the first time she has assaulted him.

According to the preliminary probable cause affidavit obtained by Indy Star, the argument began at roughly 2AM on the morning of July 5. “Ms. Portwood grew increasingly agitated until she struck him with her shoe in the right side of his neck,” Indianapolis Metropolitan Police Department Officer Ryan Salisbury states in the document.

Officer Salisbury adds that Andrew was holding their son James in his right arm at the time Amber allegedly struck him, but the child was not harmed. The officer says there were visible scratches and red marks on Andrew’s neck, which were photographed by an evidence technician.

Andrew spoke with officers on the scene and stated that the incident wasn’t the first time that Amber has hit him. He said she has done it several times before, and added that she has threatened him countless times.

Police also spoke with Amber, and she revealed that she was angry because Andrew had recorded her yelling. (It is unclear why she was yelling prior to the shoe attack.) She admitted to hitting Andrew with a shoe, “but stated that ‘it was in the shoulder and I barely hit him,'” officer Salisbury writes.

The affidavit seems to line up with a post from an alleged insider at the Marion County jail that has been making the rounds on social media since soon after Amber’s arrest. The post alleges that Amber says she hit Andrew with a flip flop:

Update from Marion county jail (not gonna say who but we got the inside news) that just dealt with Amber and they had to send her to basically what’s called an admin because she’s high profile and this person told me that she’s detoxing off drugs so she’s on meds and that’s she’s really nice (lol) and was complaining that she did not deserve to be there because all she did was hit him with a flip flop. ??

Authorities were notified about the altercation by Andrew, who sent a text message to 911 at roughly 2:14AM. “I need help,” he wrote. “My life and my son’s life is in danger.”

Amber Portwood was released from jail on July 6 after “a woman unrelated to Portwood bailed her out” by paying her $2,000 cash bond, according to Radar Online.

Amber was initially scheduled to appear in court on Monday, but the hearing was continued until Wednesday, July 10.

#TeenMomOG @AmberLPortwood arrested for domestic violence in the presence of a child again after she allegedly assaulted boyfriend Andrew Glennon in the AM hours on Friday while he was holding their one-year-old son James. CPS will reportedly be involved. https://t.co/odkCsGqu5e pic.twitter.com/NLjx76FMgL