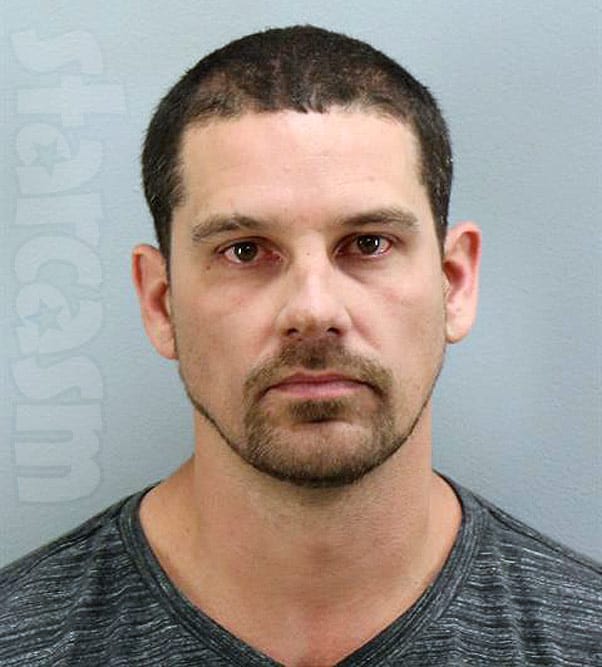 Love After Lockup cam girl Lacey is having a hard time deciding between her two convicted felon fiances John and Shane this season. But, as it turns out, her decision would have been made for her if she had just waited. According to jail records, John was arrested earlier today in Virginia for Driving While Intoxicated — his second arrest since his release featured on the show.

John’s eyes look a bit bloodshot in his most recent mug shot photo featured above. Unfortunately for John, it seems his past criminal record means he won’t be getting out any time soon. Records list him as “unbondable” with “no bond permitted.”

The charge from today’s arrest is listed as John’s first DWI, but it could turn out to be his second. John was arrested on August 17 and charged with DWI, in addition to felony drug possession, possession of drug paraphernalia, and refusing to submit to a blood or breath test. He was scheduled to appear in court for those charges on December 6.

John was also charged with Drinking While Driving / Open Container after an incident in May of 2018. That charge was eventually dismissed.

According to Virginia statutes, DWI remains a misdemeanor until your third conviction, at which point it becomes a felony. As it stands now, John is facing just the single felony drug possession charge, so I imagine he will still be able to get a plea deal with only misdemeanors.

John’s latest arrest comes just five days after he posted a photo on Instagram working for a local HVAC company. “Back on the grind gettin that $$$$$$$!” he wrote. Oh well. Pretty soon he will be back on the prison work detail grind getting that ¢¢¢¢¢¢¢!

As we were the first to report, Shane eventually wins the Lacey lottery. The two got married with a beach ceremony back in July. Shane seemed to be a bit of a sore winner earlier today as he posted a screen cap of John’s most recent arrest on Instagram and wrote “karma” over top of it. “This what happens when you spread rumors. Damn karmas a b*tch ain’t it,” he added. “Smh some people jus never change,” Shane captioned the image.

If you’re curious why Shane would mention rumors and karma, that is probably because of some comments John made last week. In his Instagram stories, John got close to committing a grammatical felony with this post:

Hoes are gonna be hoez specially if they are crackbabbys that got malestid by there dad brother. Then they got herpees from there new boyfriend/husband.

Yes, I would say that Lacey definitely made the right choice. If she told John about any sort of molestation that happened to her, then he used that information to put her on blast on social media, he is just foul.

On a completely different topic, the most recent episode of Love After Lockup sparked quite the debate among fans as it featured Lacey brutally slapping Shane. As evidenced by the preview trailer for the current season, Lacey will also slap John in an upcoming episode.

WE tv’s tolerance for female-on-male domestic violence certainly seems like a double standard! I simply cannot imagine they would have aired Michael slapping Sarah and Megan, for example.

If John really is as bitter as he seems about losing out on the Lacey Lottery, perhaps he should consider pressing battery charges against her. All the evidence he needs is in the video footage, right?

Get details on some of the numerous plastic surgery procedures that #LoveAfterLockup star Lacey (aka cam girl Kaci Kash) has undergone, plus see some throwback photos in which she looks dramatically different! ?? https://t.co/x4K8bzdZ6H

To continue to watch Lacey and Shane’s fairy tale romance play out on screen, be sure to keep tuning in for new episodes of Love After Lockup airing Friday nights at 9/8c on WE tv.