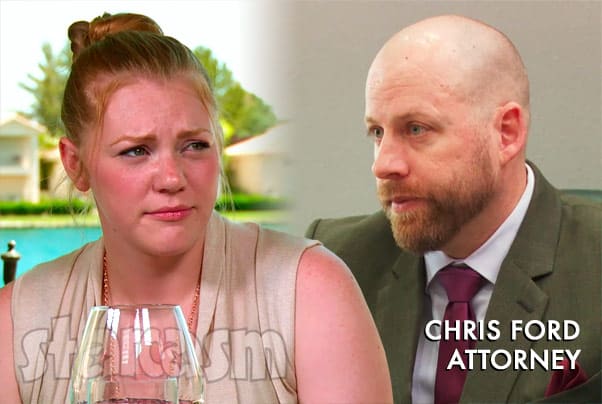 As we previously reported, the custody attorney for Love After Lockup: Life After Lockup star Brittany Santiago filed a lien against her last month for unpaid legal expenses in excess of $22,000. Less than three weeks after filing the lien notice, Brittany’s attorney filed another motion asking to withdraw as her counsel due to her failure to pay.

Attorney Chris Ford and the Ford & Friedman law firm filed the motion on Wednesday. The filing reveals that Brittany and the firm entered a retainer agreement on May 2, 2019. Brittany paid $3,500 as a retainer and signed an agreement that includes provisions for additional expenses beyond the original retainer.

“Defendant has fallen substantially behind on her payments to this office such that she can no longer afford this office’s representation in this matter,” reads the initial Statements of Facts. “Accordingly, Defendant has failed to fulfill her obligation to Ford & Friedman pursuant to the terms of the Agreement. As a result, Ford & Friedman are filing this motion to Withdraw as Attorney of Record for Defendant.”

Attached to the motion is an affidavit from another attorney at the firm that includes the following points:

3. Defendant has failed to adhere to the Legal Services Agreement (hereinafter “Agreement”), as she has failed to pay her outstanding balance and replenish her retainer by the deadline provided by the attorney to allow for the large expenses that will be associated with proceeding with litigation.

4. Ford & Friedman is currently owed substantial sums for its representation and it would be inherently inequitable to require the firm to continue in its representation of Defendant when she is unable to provide just compensation for legal services past due and owing.

A hearing in response to the motion is scheduled for March 19.

Unfortunately for Chris Ford and his law firm, there is a prior hearing scheduled on March 4 in regards to Brittany’s custody battle with her ex Tito for their son Giovanni.

As we previously reported, Brittany had a huge win against her ex Tito in the custody battle for their son Giovanni after Tito tested positive for meth. Brittany was awarded temporary sole legal custody and temporary primary physical custody of Giovanni as the judge ordered Tito to participate in a six-month drug monitoring program called Patch.

#LoveAfterLockup star Brittany Santiago gets temporary full legal and physical custody of her son Giovanni after his dad Tito failed a recent drug test! Get all the exclusive details! #LifeAfterLockup https://t.co/sMV0kUJYwb

I would assume that if Tito completes the six-month program with no positive drug test results that it will re-open the door for him to regain partial custody of Giovanni. That is going to be a very difficult battle for Brittany to fight without an attorney!

We will continue to monitor the story and provide updates if there are any major developments.

Complete schedule for Love After Lockup ‘Our Story’ episodes

LOVE AFTER LOCKUP Destinie back in prison, tried to sell Shawn’s car on Facebook?