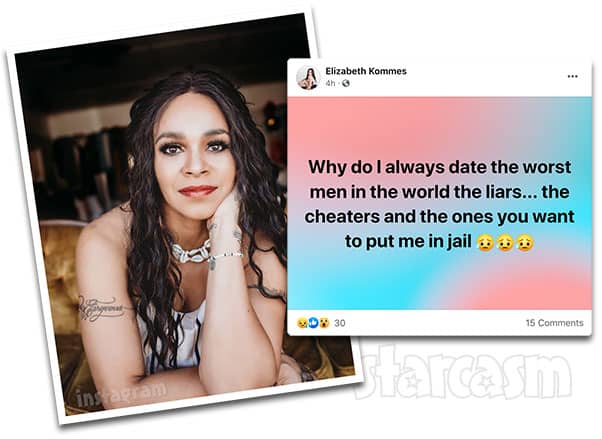 As we reported on Wednesday, former Love After Lockup star Elizabeth Kommes was back in jail this week after a domestic incident that resulted in her being held on a parole violation. We didn’t have many details about Lizzie’s arrest, aside from there being a domestic violence restraining order taken out against her. Now we do have some additional information straight from Lizzie, who is currently back out of jail.

As we mentioned in our previous post, Lizzie started dating a new man named Brian earlier this year, and she recently relocated to Port Washington, Wisconsin to be close to him. It was assumed that her recent arrest had something to do with Brian, and she confirms with us that it did — although it’s not quite as simple as that.

“Brian asked me to move here to be closer to him about 2 months ago,” Lizzie tells us, adding that “he wanted me next to him because we were in love.” Lizzie says that it was only after she made the move that she realized Brian had a drinking problem, and that he gets “very mean when he gets drunk.”

Lizzie says that Brian called her many derogatory terms, including numerous ones implying that she is promiscuous, as well as a particularly horrible racist name. So why did Lizzie remain in Port Washington? “Because I thought I could change him,” she confesses.

#LoveAfterLockup and #LifeAfterLockup star Elizabeth Kommes is currently in jail in Wisconsin after being booked on Tuesday. Find out all we know about Lizzie's new legal troubles 🙁 https://t.co/aG1lAvUDjA

The couple’s issues escalated thanks to an ex-girlfriend of Brian’s that turned out to not be such an ex after all. Lizzie says the woman showed up at Lizzie’s apartment on Wednesday the 23rd “wondering why her boyfriend is sleeping in my bed.” The confrontation came as quite the surprise to Lizzie. “I had no clue Brian was two-timing both of us, but we did not get into a confrontation that day,” Lizzie says.

“I told Brian I was done, but he insisted on winning my love back,” Lizzie reveals, adding that he bought her flowers and jewelry. The tactic worked, and Brian and Lizzie found themselves once again spending time together.

The reconciliation was short-lived, however. Brian’s not-so-ex reportedly showed up at his house on Saturday the 26th. Lizzie says that the woman was a bit inebriated (Lizzie’s words were a little more harsh), so Lizzie and Brian wound up giving her a ride back to her home.

Lizzie says that the ex repeatedly hit Brian in the head, and that she asked the ex to stop. The ex refused to stop. At some point she put her hand in Lizzie’s face and allegedly shoved her. “I ended up getting into an altercation with her,” Lizzie says.

Being well aware of her parole conditions, Lizzie let her parole officer know about the incident immediately.

She says that Brian and his ex went to the police on Tuesday and both of them stated that Lizzie assaulted the ex. “Brian also went to the police and said that I stabbed him with a knife and that I’d beat him numerous times,” Lizzie adds.

Lizzie says that there are no marks on either Brian or his ex, and she insists that the two knew all about her parole conditions and that they were trying to have her sent back to prison.

So what exactly are the charges against Lizzie at this point? “I am not facing any new charges, only a probation violation for getting into an altercation with [the ex], and Brian said that I stabbed him with a knife.”

Despite the rather unpleasant situation she has found herself in, Lizzie remains positive. “I am doing great,” she tells us. “I am single and I’m not an abusive relationship. I am glad he put a restraining order on me because I don’t want any contact with him.”

Everything happens for a reason. I was obviously going down the wrong path with this man and God needed to give me that Clarity with him, and the only way to find it really is in jail without any distraction. So I’m doing amazing. Simply Amazing ❤️❤️❤️

On another positive note, when Lizzie moved to Port Washington, she got her own apartment. “Thank God I didn’t move in with him,” Lizzie admits. “He wanted me to move in with him. OMG, could you imagine if I did? Right now I’d be on the street!”

And what about Lizzie’s factory job? “I ended up quitting my job for Brian,” she says. “He told me that none of his women work.”

#LoveAfterLockup Scott Davey appears on the @fancounterslive podcast to respond to Lizzie's recent allegations about his drug issues. Plus, Scott reveals why he spent years in federal prison! (It wasn't drug related) Post includes the full audio & a recap! https://t.co/1DW3y7QQ80 pic.twitter.com/cvVan0mCVj

So what’s next for Lizzie? “I will be moving because I will not stay in this town. I will be getting a new job when I move…not sure where yet. I’m working on everything. I just got out of jail today.”

It sounds like Lizzie was in a pretty terrible situation, and hopefully she will be able to move on and get back on a positive track. We wish her the best, and hope that she remains one of the show’s happy endings.