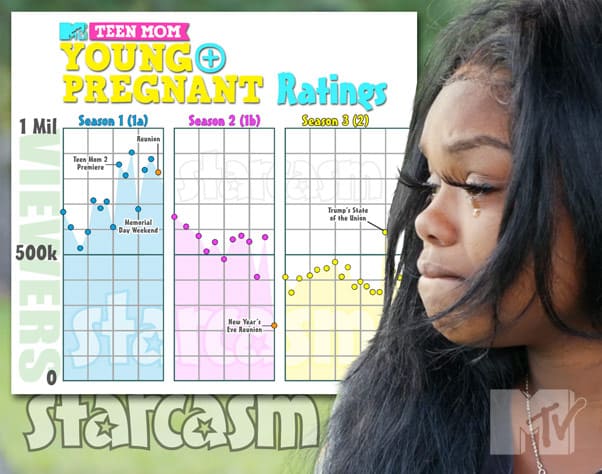 MTV continues to have difficulties launching additions to their Teen Mom franchise after the huge success of Teen Mom (now Teen Mom OG) and Teen Mom 2. Teen Mom: Young and Pregnant has fared better than it’s three failed predecessors by lasting multiple seasons, but the show’s ratings were so low this season that the network opted to not film a Reunion and they’re reportedly weighing whether or not to cancel the show.

Numerous Young and Pregnant cast members and producers have been campaigning for viewers on social media over the past four weeks. Most all of their posts begin with messages like “If you want to save the show” or “If you want to continue to watch the moms’ stories on the show” followed by “then tune in live when the show airs.”

The viewership pleas seemed to start after the show saw a sizable bump in the ratings on February 4, during the same time that President Donald Trump was delivering the State of the Union address on numerous other networks. I am assuming that was a spark of hope that the show might finally be pulling out of the season-long ratings quagmire it was in.

Unfortunately, the ratings fell back down for the following two episodes, which were more in line with the average ratings all season. (Click here for an in-depth look at the ratings right up until a few weeks ago.)

Cast and producers stepped up their efforts prior to this week’s Season Finale, and there was a bit of an upswing in the ratings — but still not on par with the February 4 episode. The February 4 episode had 511,000 live and same day viewers, while the season finale brought in 470,000 viewers. Not counting those two episodes, the season averaged just under 407,000 viewers per episode.

Here is a graphic showing the ratings for the entire run of Teen Mom: Young and Pregnant so far: 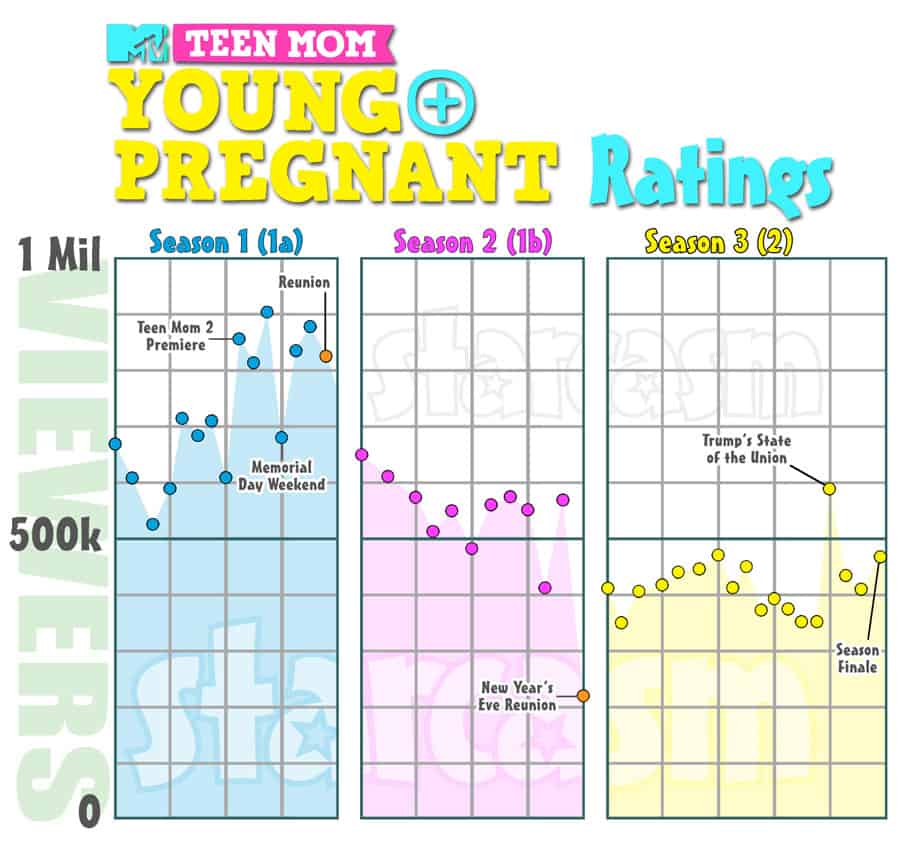 Numerous fans — and even cast members — are openly pondering the fate of the show online. So, Has MTV canceled Teen Mom: Young and Pregnant?

The number one source for Teen Mom production insider information is The Ashley’s Reality Roundup and she answered that question in a recent Twitter exchange. “Is #teenmomyoungandpregnant for sure cancelled????” a Twitter user asked, tagging The Ashley and a few of the moms from the show. “No not yet,” The Ashley responded. “I’ll have more on this soon,” she added.

That all but confirms that MTV execs have yet to make a final decision on the fate of the show. MTV has continued to actively recruit young moms as potential reality show cast members, so it seems clear that they are committed to continue to try to make the concept work in some form.

They are not having a reunion; i will have more on the show this week. stay tuned!

I’m speculating that MTV will follow the lead of TLC’s hugely successful teen mom reality series Unexpected by keeping Young and Pregnant, but overhauling the cast. The network has already set that precedent by cutting Lexi Tatman and moving Jade Cline to Teen Mom 2, then replacing them with newcomers Kiaya Elliott and Rachel Beaver. My guess is that we will see another season of the show, but once again there will be some moms cut and other new moms added.

Given how poorly the show did in the ratings this season, I believe producers are going to be aggressive with the overhaul by cutting at least two of the three remaining original moms: Ashley Jones, Kayla Sessler, and Brianna Jaramillo. Brianna seems like a lock to be cut. Ashley and Kayla will be a much more difficult decision — for very different reasons.

Kayla has a second child and is in a relatively stable new relationship with a laughably terrible ex in Stephan. That seems to be a tried and true formula for success for the franchise.

Ashley Jones is perhaps the most self-aware mom the franchise has ever seen as far as trying to be a reality TV star. She seems to have no boundaries when attempting to stir up drama for the cameras and for social media buzz. I’m sure producers appreciate the hustle.

Producers probably thought they had hit back-to-back homeruns with the casting of Rachel and Kiaya! These two moms brought A LOT of drama, a lot of tears, a lot of baby daddies, a lot of arrests, and a lot of yelling — qualities that have been a huge part of the success of Teen Mom OG and Teen Mom 2. For whatever reason, those things didn’t translate to big ratings this time around. That being said, I thing that producers would opt to keep both Rachel and Kiaya if they decide to revamp the cast and do another season.

While you ponder that conundrum, here’s a little Teen Mom history. There have been at least four attempts by MTV to expand the Teen Mom franchise since Teen Mom 2. Teen Mom 3 was canceled after one season, despite averaging well over a million viewers a week — almost triple that of Young and Pregnant. Cast members Briana DeJesus and Mackenzie McKee woudl eventually return to MTV as cast members of Teen Mom 2 and Teen Mom OG.

The network cast and filmed a Teen Mom: New Jersey series in 2017. The show made it as far as being included in a video preview by MTV, but would eventually be scrapped before a single episode aired.

The #TeenMom #YoungMomsClub premiere had lower ratings than when it debuted as #PrettyLittleMamas in August. I thought producers did an amazing job re-editing the series to make the cast more relatable, but it may be facing another premature cancellation. https://t.co/4p0gcZSb88

MTV debuted Pretty Little Mamas in August of 2018, but they abruptly pulled the show from their schedule with no announcement after just two episodes. Producers spent months re-editing the series to be more in line with the Teen Mom format before relaunching it 2019 as Teen Mom: Young Moms Club in April of 2019. I was a fan of the repackaged series, but viewers weren’t interested as the ratings for Young Moms Club were even lower than Pretty Little Mamas.

Teen Mom: Young and Pregnant was actually the third attempt to expand the franchise as it debuted before Young Moms Club (and Pretty Little Mamas) in March of 2018.