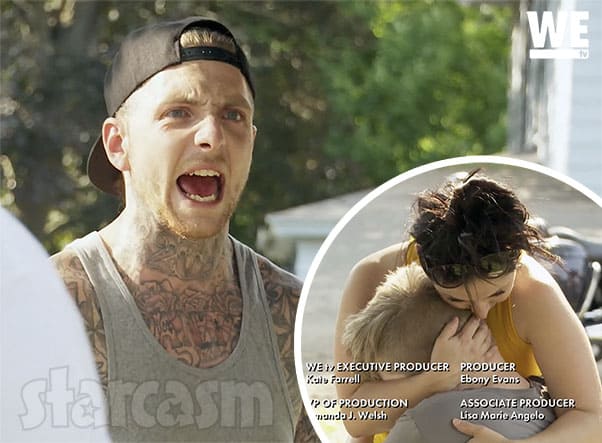 On last week’s episode of Love After Lockup, viewers got to see Doug’s homecoming as he surprised his Kalamazoo family members. The scene quickly took a turn for the worse as tensions and vocal volume rose. But was the drama just for the cameras, or is Doug’s family home really the drama den it looked like on screen?

Judging from the Facebook pages of Doug’s family members, their lives look to be even more packed with drama than what we saw on Love After Lockup. Before I get into some examples of what life is like in the Kalama-zoo, I wanted to share video of Doug’s homecoming that was filmed by his sister, Ashley.

Ashley shot a little more than three minutes of footage of Doug’s arrival and posted the clip to Facebook on June 20 of last year. You can see the WE tv camera crew, and you will recognize a lot of the dialogue from the homecoming episode. You can also see Rachel picking up and holding baby Michael.

The fact that some of the family members were set up in the front yard when Doug and Rachel arrived was an indication to me that Doug’s arrival wasn’t a surprise like viewers were told. However, Ashley confirmed that they didn’t know Doug had been released from prison until earlier that day.

“A couple days ago they serprised us with a show called love after lock up we didn’t even k ow he was out till today,” Ashley wrote in the comments. She added that he had been out for a couple days and was living with his wife three hours away.

So, it sounds like the family found out Doug was out and was coming to visit earlier in the day. The rest of what happened on the show looks to have been the real deal.

As further evidence of Doug’s family’s propensity for drama, here are some additional Facebook posts by Ashley from May and June. They include an incident with police after Ashley’s neighbor called them as well as her brother Harley (who was included in Doug’s homecoming scene) getting shot. I will remind you that Ashley is the one who took in Doug’s son, Dougie. 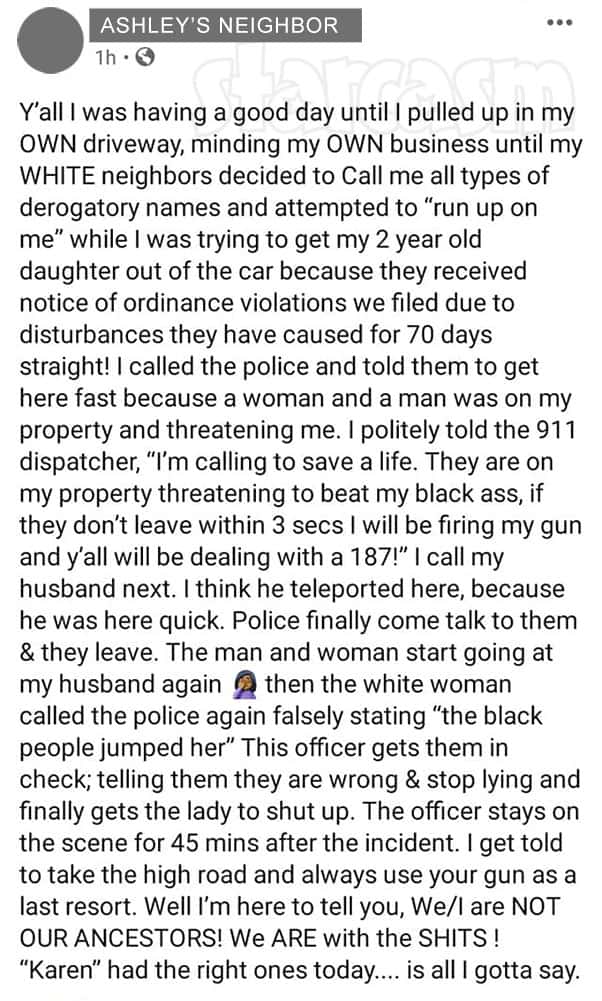 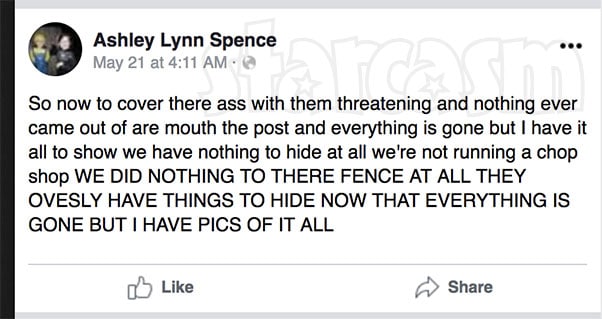 Here is a link to the article about the shootings, including Ashley’s brother Harley.

I should add that Ashley revealed on May 3 that she is pregnant again. Oh, and her husband is currently on probation after being convicted of stalking, malicious destruction of personal property, and larceny from a motor vehicle.

If we go back a ways on Ashley’s Facebook profile she mentions seeing Dougie’s mom on June 20 of last year:

ASHLEY: I was coming down stadium about a hour ago and at 11th st I seen [Dougie’s mom] at the corner with her boyfriend and I swear she was picking at her body bad when I was sitting at the stop light and she looked like a deceased person alive walking sh*t was scary 🤢☠️🤮

FRIEND: Pretty sure I saw her yesterday when I was working at the stadium citgo filling in 🤣😭

ASHLEY: Did it look like a dead person with sores all over her body?

FRIEND: Yep, and she stays mean mugging me ever since I was little and she accused me of f***ing my uncle. Weird ass b*tch 😂😂😂

ASHLEY: Lmfao b*tch has f***ed everyone in kalamazoo for dope its sad she doesn’t even have her kids and doesn’t care.

Ashley’s friend shared Dougie’s mom’s most recent mug shot photo. She is definitely troubled and has a long history of drug arrests. Here is a collection of her mug shot photos from the past few years: 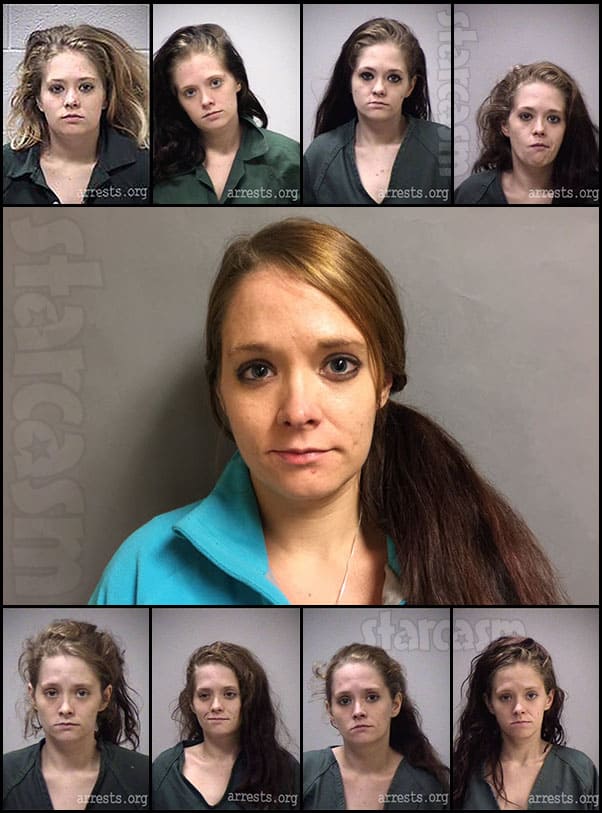 In addition to posting on her own Facebook page, Ashley also posts on Dougie’s Facebook page. Here’s a post and some comments she wrote on the page in October of 2014:

ASHLEY: So I had a open cps case for the last week due too people wana lie and tell false alagaligations about douglas and the way he lives and none of them are true so the case is closed but im expecting plenty more people just need to grow up and move on and realize what they have done and just get over it sorry it has to be like this but its better this way I make the decisions of what gpes on and who hes around and I hes doing really good and hes not going around any negative people for now on

DOUGIE’S MATERNAL GRANDMOTHER: Ok for one they wasn’t alligations,they were facts and all ur doing is hurting him,please stop with the bs and allow me to see him,if not we’ll be ib court next mobth,Ashley wuit the negativity towards him and thats keeping him from me and whis that girl hes in this picture with.my only concern is Douglas,and you know that hes fine and tooken care of here.

ASHLEY: See u in court 🙂

DOUGIE’S GRANDMOTHER: That’s cool Ashley keep hurting him you will find out how it feels to be hurt in the way your being

ASHLEY: Its not hurting him he doesnt wana talk or see u he said it himself so im just sittinh back watching love to see what you got planed next your just hurting yourself more than anything 🙂

DOUGIE’S GRANDMOTHER: Yeah r that’s your mouth grow up, let me talk to him then and he can speak for himself im just tiered of the negative impact it has on him being pushed around so if that’s the way you feel then I won’t guvr up believe that.love you little guy nana misses you tons hugs and kisses.

ASHLEY: Your not talking to him what happened last time u talked to him on the phone or won’t happen again ill see you in court when it’s all said and done and you will feel real stupid

DOUGIE’S GRANDMOTHER: Wtf ever ya all need Jesus I will see you in court

DOUGIE’S GRANDMOTHER: Please let me see him yeah I hurt but who cares

ASHLEY: No hes not going anywere not falling into the sh*t again ive tryed working with u and look what yiu have done I choose who he see amd who hes around and ur not good enuff or capable for him to be around ive gave u plenty of chances u hit strike 3 again wont happen again sorry but quit contacting us and calling and texting or I will go farther with this but I am waiting for the court date in the mail guess ill see u there when ur looking stupid ass f***

ASHLEY: Yes and he loves were hes at and people just want to try to ruin everything thays going on that they only care about tjem self thats it and ruin peoples lifes when its been proven not good they need tp just move on in there life and forget about the future

Here’s an entry from Ashley posted in May of 2018. I can’t help too much with understanding what’s going on — just know there are two different guys named Ricky:

ASHLEY: People don’t wana see the truth so they block people lmfao nasty mother f***ers it’s crazy I’m so glad I don’t deal with that family no more and me and my boys last name will be changed real soon you dead beat child molesting b*tch boy you will never be nothing in life but going from one hoe to the next lmfao and play daddy to one that’s not yours u will never get that chance with mine and Mike’s son might wana get DNA cuz all thoes trips to speedway wasn’t to get a pop it was to meet Mike lol

ASHLEY: Some sick twisted sh*t of u tell me he’s a worthless peice of sh*t has never seen his son and never will

There’s a lot more I could share from the family’s Facebook pages, but this post is already getting very long. I’m sure we will get to see lots more of Doug’s family with new episodes of Love After Lockup airing Friday nights at 9/8c on WE tv. For those of you impatient and wanting to know spoilers for pretty much all of the couples — including Rachel and Doug — here are links to our previous posts:

#LoveAfterLockup We've got a #spoiler update for Rachel and Doug! Find out if he's still getting his baloney, boobs, booze and blow jobs from Rachel or someone else! #LoveAfterLockupSpoilers https://t.co/G3UsfpjDWH

#LoveAfterLockup #SPOILERS Are Britney and Ray still together? PLUS, check out Britney's past commentary on several reality TV shows including calling Love After Lockup "ratchet" and #90DayFiance star Chantel "fake bouje and dusty!" https://t.co/KJV06HWRXR pic.twitter.com/U5fQz3UqB5

Britney was arrested for assault in 2011