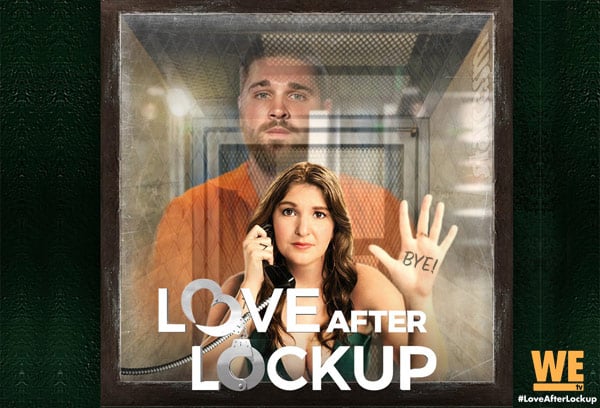 It has been a CUH-RAZY week for Love After Lockup‘s Johnna DiGrigoli. The 27-year-old reality star has been biting her lip for months about her relationship status with her #hotfelon fiance Garrett Tanner because of her non-disclosure agreement with WE tv, but a series of events this week involving a strip club bartender named Nelly forced Johnna’s hand, and since then the tea floodgates have opened wide!

In case you missed it, some photos and videos of Garret with a mystery woman surfaced online over the last couple weeks. At the time, her name was not known and all anyone had to go on was the label “Natural” that Garrett wrote on an Instagram snapshot of her. Johnna wagged her virtual finger at Garrett with a stay-in-your-lane tweet: “I low key want this ‘natural’ girl to pop on Garrett’s story again so I can give her the attention she really deserves. ?”

Garrett didn’t “pop on Garrett’s story again,” but Garrett popped on hers in the form of a series of video clips of the two hanging out together. At this point, her identity had been revealed as a strip club bartender who goes by the name Nelly.

Johnna followed through on her threat and she served “Miss Natural” by posting Nelly’s mug shot photo and the story of how the two ladies first came to know each other. You should really read the entire story, but the gist of it is that Nelly got arrested with a lot of marijuana while with Garrett and she gave the cops Johnna’s address instead of her own. (Which could be because she was staying in a hotel at the time — more on that in a minute.)

Nelly skipped out on her court hearing and a warrant was issued for her arrest. As a result, police arrived at Johnna’s door in the middle of the night looking for Nelly! Johnna called Garrett — who had already been booted from their house (more on that in a minute too) and got the whole story.

OK, so that catches you up through last night.

After Johnna served up the Miss Natural tea, Nelly arrived at the tea party with her own pitcher in the form of text messages with Johnna in which Johnna admitted to cheating on Garrett while he was in prison!

“Garrett was in prison driving me crazy,” Johnna wrote, “So yeah I cheated but I never had sex.” Johnna later added that she “didn’t f**k anyone, I just did other stuff.” Nelly assumed that meant oral sex, but Johnna later denied that in a series of Instagram streams.

“So our friend Nelly is posting screen shots of me admitting to cheating on Garrett while he was in prison and that is 100% true,” Johnna said. “I’ve always said I own my sh*t.” She explains further:

I never had sex with anybody I didn’t even do oral stuff. it was all petting [I think she says petting but it could be petty] kissing touching, like, just me craving attention because Garrett was in the box all the time in the beginning and you know I guess you just want to feel like you’re desirable outside of a guy who’s in prison. I have no problem admitting that. I definitely suffered from insecurities while I was with him because people would always say “He only wants you because he’s in there.” Well, other guys wanted me too. I just didn’t want them. I wanted Garrett. I turned down many guys to be with Garrett.

In addition to the narrated clips, Johnna also posted a series of text graphics telling the story of exactly what happened that caused her and Garrett to break up last fall. Essentially, it boils down to Garrett not being any different than he was before he went to prison — which was disappointing to Johnna and Garrett both. (Johnna references screen shots of text messages between her and Garrett, but I haven’t seen those.)

Here’s what Johnna had to say:

Guess we’re playing dirty now? Okay! After Garrett finished his drug program he went back to his old ways. He went on one job interview and they sh*t all over him so he gave up and decided he wanted to be in the streets. Listen, I didn’t wait around for 4 years so you could be a hoodrat. So it was a constant battle. Finally one day I got fed up with his sh*t and asked him to leave. I thought he would wake up and come home and realize he was destroying his life but boy was I wrong.

So one thing leads to another and I give him the ultimatum…me or the streets? He chose the streets. We were going to try to make it through the holidays but right before Thanksgiving I decided I was just done and told him to just get his sh*t and leave. That night he got in a car accident and left his car totaled. Then called me drunk from the club crying. Boo f**king hoo. We haven’t even been over a full day and already you’re destructive. You wanted this so own your choices.

We previously posted about Garrett’s accident, but according to the police report it was on October 19 — which was well before Thanksgiving. Perhaps there was a second accident? Anyways…

Johnna followed those posts with photos of a letter Garrett wrote her “after he f**ked up because he got robbed and took it out on me.” The letter is hand written and spans two pages in a spiral bound notebook: 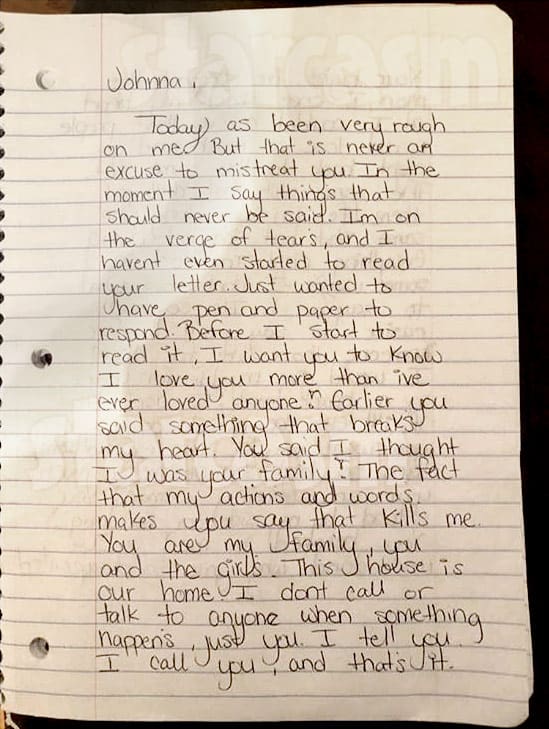 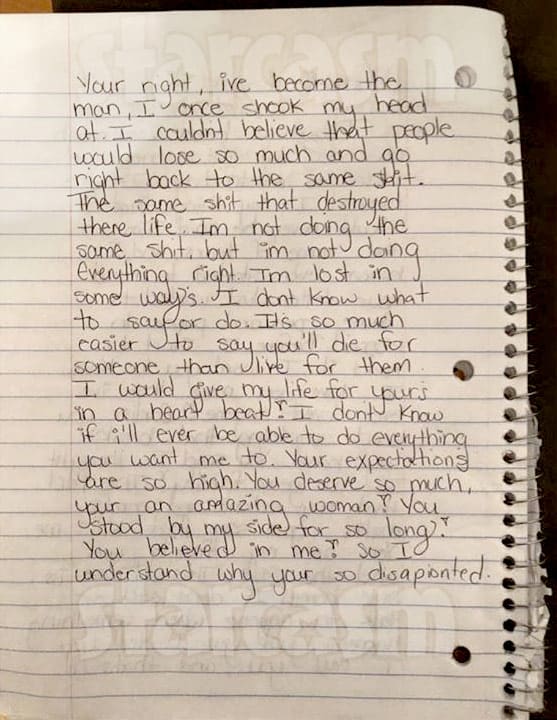 Johnna then posted her text message from Garrett after she kicked him out and told him she never wanted to see him again:

I just want to say I never lied to you, I always told you what I new or felt. I truly believe I was a changed man. I’m sorry for coming home and changing, or being someone I promised I wouldn’t be. This process hasn’t been easy. I may have not handled things well. It’s very hurtful on both ends I promise, I’m sure you don’t want to here from me anymore, I’m sorry I shut you out though. That wasn’t how I should have handled it! I love you, and I’m sorry I hurt you. I’ll try and find some housing options and have champagne [his dog] in mind when I do so.

His screenshots of me saying awful things to him…100% accurate. I own my crazy. He betrayed me so I said mean things. Who doesn’t? Letting this girl use my address because she’s living out of motels? That is not my problem. You should’ve never involved me in you criminal activity!!!! & how quickly he moved on was crazy! So I asked him for a timeline and he still couldn’t even admit to me who she was he just said I’m messing with her. Oh and that he doesn’t bring her to family functions. ?

So Nelly thinking she has a prize kiss my a**. If he was worth keeping I’d still have him. He knows the deal. I told him daily I was falling out of love with him. He changed and even though we loved each other it wasn’t enough. We want to live different lifestyles. It would never work. He thought he wanted a cookie cutter life and he was wrong!

Nelly has since posted a photo of house key on Instagram, so perhaps her motel days are over for now?

Good gracious!!! I’m guessing Johnna and Garrett are at risk of losing their paychecks from WE tv due to violating their non-disclosure agreements, but Johnna should actually be getting a bonus! Sure, these stories are spoilers — but it is just one week before the finale and all of this is working WAY BETTER than any preview trailer! Who wouldn’t tune in to see this all play out?! Wow. Oh, and PLEASE tell me there is a Reunion special coming!

The production company that handles Love After Lockup also created 90 Day Fiance, so I’m guessing they are already looking to expand this franchise like they did with 90 Day Fiance. I can already see some sort of Love After Love After Lockup in which they continue to follow the cast members — both those that are still together (if there are any!) and the individual stories of those who didn’t work out. I would SOOOO tune in to keep up with Johnna and Garrett’s stories! (Although it sounds as though it’s just a matter of time before Garrett is back in prison. Even so!)

You DO NOT want to miss the Love After Lockup season finale airing Friday, February 23 at 10/9c on WE tv!