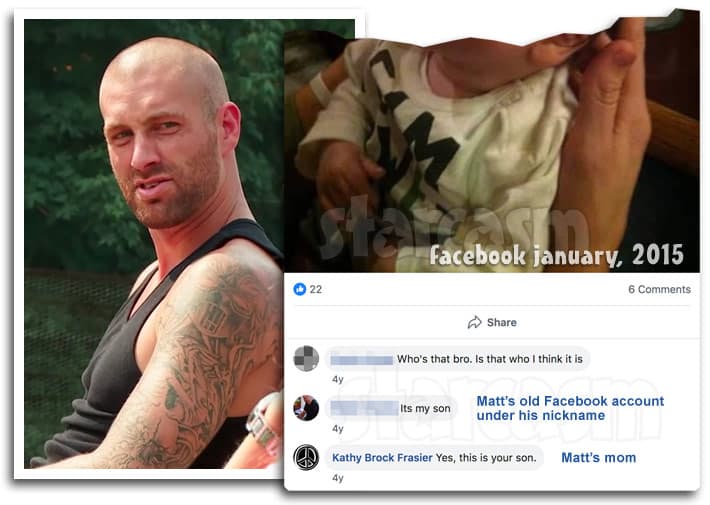 As we previously reported, Love After Lockup star Caitlin has a preteen son. But, she may not be the only one in the relationship with a child!

Her wildflower ring fiance Matt Frasier has a Facebook profile that he hasn’t used since 2015. His very last post was an updated profile photo featuring an infant being held in a man’s hands at a restaurant. Someone in the comments asked who the baby was, and Matt replied: “It’s my son.”

Matt’s mom Kathy later replied: “Yes, this is your son.”

The photo was posted in January of 2015, and the baby looks to be about one. So, if the photo was taken around the time it was posted, then the little boy in the picture would be roughly four years old now.

The same source who tipped us off to Caitlin having a son, also mentioned that Matt may have one — but the source’s confidence level on the latter tip was much lower. We were able to confirm the tip about Caitlin’s son thanks to an enforcement lien for “past-due child support” filed by the State of Washington Department of Social and Health Services Division of Child Support in April of last year. (See link above.)

A similar search for Matt did not turn up any liens, but that could be easily explained by the fact that he has never really been able to stay out of prison for very long, and there would be no point to even attempt to get child support. Of course, that may change soon given the fact that Matt has managed to stay out of prison (well, sort of) and is currently on a very popular reality show that was just extended from 14 to 24 episodes.

For those curious about how much the cast members of Love After Lockup get paid, we covered that in a previous post.

It will be interesting to see if the subject of prior children comes up on the show at all for Caitlin and Matt — not to mention Caitlin’s tattoo, which we’ve been told is to honor a child she lost to a miscarriage. To find out, keep tuning in to new episodes of Love After Lockup airing Friday nights at 9/8c on WE tv!

If you’re looking to kill some time in between episodes, and you are curious to know more about Matt, be sure to check out our extensive coverage that includes his prior arrests as well as his recent ones!