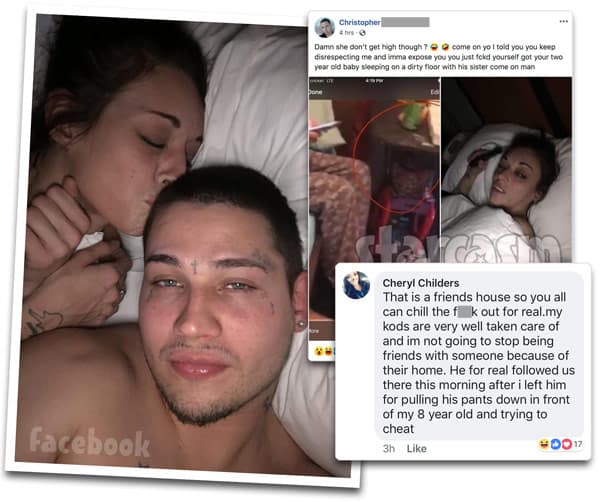 Love After Lockup: Life After Lockup star Cheryl Childers has been bragging about her relationship with new boyfriend Christopher on social media over the past couple weeks, but their relationship recently ended after Christopher allegedly slid into another woman’s DMs. The break up has been anything but amicable, and Christopher has posted a video of a dispute he had with Cheryl before leaving town that shows Cheryl in some deplorable living conditions. A child can be seen in the video, and Christopher says Cheryl’s children sleep there on the floor, but Cheryl insists it’s a friend’s house.

UPDATE – Click here for a recap of Day 2 of the Cheryl and Christopher drama.

Before getting to the video and other posts by the two former lovebirds, I will catch everyone up.

Cheryl and Christopher made their relationship official earlier this month, sharing numerous lovey-dovey posts expressing their undying affection for one another. Love After Lockup viewers were already aware of Cheryl’s faulty perception of undying love after her catastrophic relationship with her bank robber beau Josh, and it seems Christopher’s concept of love everlasting might not inspire any Disney movies either. Online sleuths quickly uncovered his marriage certificate showing that he wed another woman in January of this year.

Christopher’s ill-fated marriage lasted longer than his relationship with Cheryl, however. Less than two weeks after posting their first photos together, the couple had a huge fight that spilled over to Facebook.

The exact timeline is a little unclear, but I believe the first social media evidence of the split was a video posted by Cheryl after she learned that Josh was pitching his Brazilian woo via DM with another woman.

In the clip, Christopher can be seen walking down a snowy driveway in a leather jacket and carrying a plastic grocery bag. Cheryl is recording the video and can be heard berating Christopher for getting caught cheating. (She actually does a consonant swap at one point and says: “You got faught cuckin’ cheatin’.”)

Here is the video, as well as the DM evidence:

After Cheryl posted the video of Christopher doing his walk of shame, he returned the favor by posting his own video. That clip is much longer and begins with Cheryl and Christopher fighting and her threatening to call the police. The couple eventually enter a mobile home as Christopher continues to film.

At this point in the article I will be abandoning any and all humor. The conditions shown inside the trailer are deplorable. Christopher walks by a small child on the floor at one point in the video, and both he and Cheryl are seen smoking cigarettes. Christopher actually appears to take a cigarette and add something to it before lighting up.

In addition to the video (included below), Christopher also posted two photos. One is a screen cap from the video and shows what appears to be a white substance in two lines on an end table. The other photo is Cheryl in bed with some sort of vaping/pipe device.

Here are the images along with Christopher’s caption: 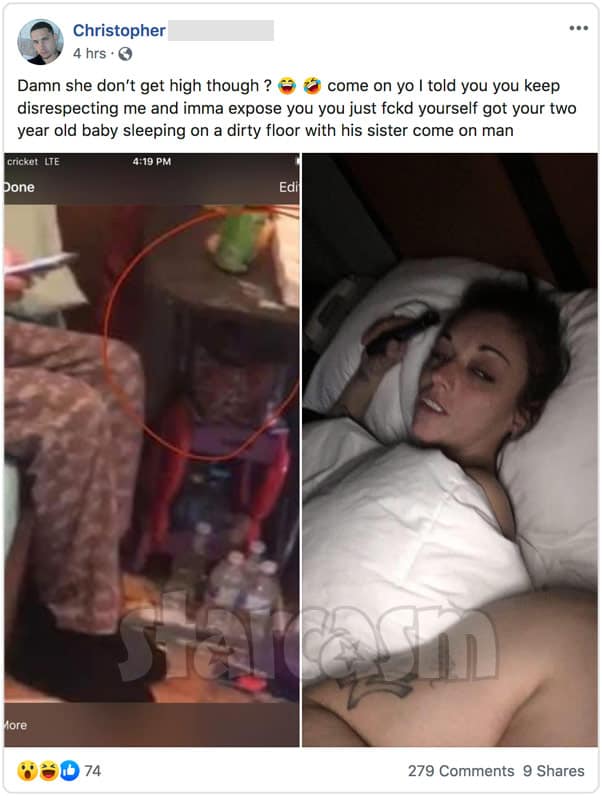 Damn she don’t get high though? ? ? come on yo I told you you keep disrespecting me and imma expose you you just fckd yourself got your two year old baby sleeping on a dirty floor with his sister come on man

Here is the actual video. I warn you that there is profanity, and seeing the living conditions is quite disturbing:

UPDATE – It appears as though the video is no longer available. Here’s another version that was re-posted to Instagram:

Here are a few screen caps from the video: 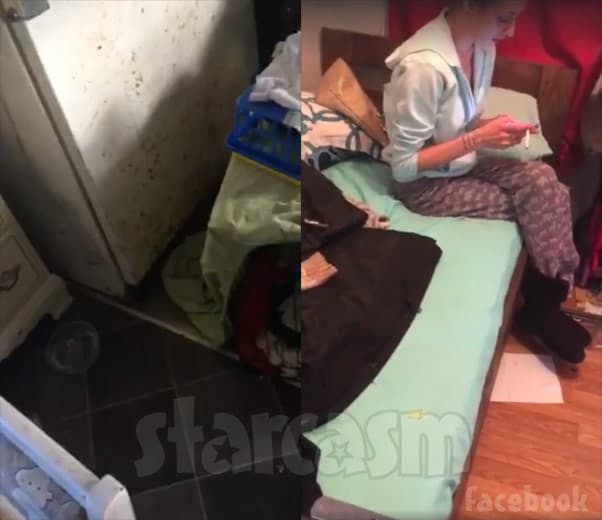 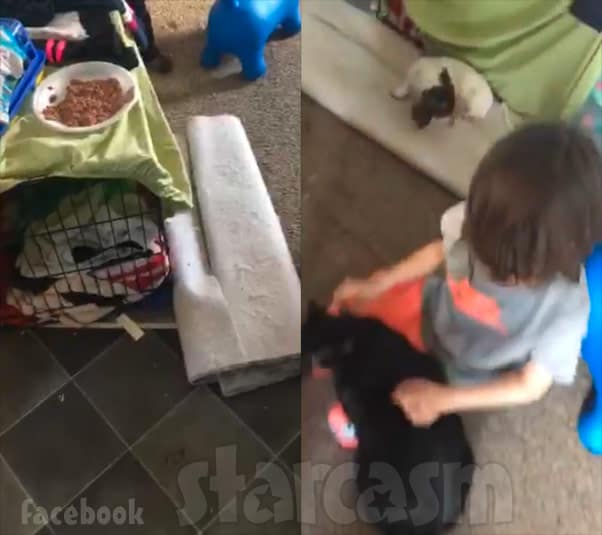 Cheryl reveals in the clip that she was upset because Christopher wouldn’t pull up his pants in front of her kids. She talks more about that in comments she made on her own Facebook page, some of which are included below. She also insists that the trailer is a “friend’s house” that she went to after their initial dispute, but Christopher says that is where her kids are sleeping.

As unpleasant as the living conditions are in the trailer in the video, some of the comments made by Christopher and Cheryl were just as unpleasant. I’ve gathered together a sampling of them for you here to wrap up this post. I will start with Christopher’s and then move on to Cheryl’s. I left all of the grammatical errors and typos intact — partly because I didn’t want to take on the monumental task of correcting them, but mostly because they convey the messages and context more accurately as they are.

CHRISTOPHER: Yo Cheryl Childers ? you trifling a** crackhead clean that damn room up

COMMENT: I thought she was the love of your life?

CHRISTOPHER: I tried giving her the benefit of the doubt til I saw her hitting that snowflake and pipe

COMMENT: Wow there’s kids there, omfg Remember that she’s actress, she has connections on the inside LOL LOL ALL THESE INMATES she right poor guy

CHRISTOPHER: ? that btch only connections is the zip lock baggie ?

COMMENT: Omg what a dirty a** house? run as fast as u can!! I can only imagine how bad the house smells

CHRISTOPHER: …I’m contacting we tv on her a** ? someone needs to pick them kids up get them outta that filthy trap house

COMMENT: Someone call DCF that house is fricken disgusting! And you’re no better dude letting them babies be in that smoke and filth

COMMENT: She crazy she nasty and you loved her a**. We told ya… We warned ya… Now she everything but that actress huh??

CHRISTOPHER: I know it took a week but damn fck that trick

COMMENT: That house is disgusting. I would never post my house if it was that trashy looking

CHRISTOPHER: not my house I couldn’t stand it she makes her two year old sleep on that nasty trashy floor

COMMENT: There is just no excuse for anyone, especially a child to live in that filth! Get off the phone, off the bed and go do some serious cleaning. That poor child looks so defeated! I hope CPS shows up and does something about it. Is there even food for him to eat?

CHRISTOPHER: the two year old and minors all sleep on that dirty carpet

CHRISTOPHER: we all should

COMMENT: Christopher…you need to turn her into the authorities if that’s meth on that table or you’re going to be charged with endangering those children by not reporting it.

COMMENT: Weren’t u just obsessed and so Inlove with this girl blasting every b*tch who said hi to you!? Lol do it for the clout or nah?

CHRISTOPHER: when I’m in a relationship I’m fully dedicated but had to find out for myself

COMMENT: well good for you. That’s a good trait to have but don’t even waste your time on doing all this everyone knows Cheryl is cray cray lol just do you. I’m sure ur dms are blowing up start veting those for potential new baes!

#LoveAfterLockup Cheryl says it's "creepy" how much time Josh spends alone with his mom. Josh calls Cheryl "delusional as f**k & a goddamn psycho." Get a full recap of their feud, including terms like "imbreed," "strip club" & "registered sex offender." ? https://t.co/84IQ2IN8pU pic.twitter.com/vogAFQ9WUR

CHERYL: He’s homeless with no car or job go ahead eat it up ladies ???

COMMENT: From the video he shared maybe you should clean your home… people are threating to call CPS for a filthy enviornment. J/S

CHERYL: Wasnt my house.. But thanks for your advice i guess. ?✌?

COMMENT: Girl you need to stop worrying about boy drama and clean up your nasty a** house them kids living in ??

CHERYL: Once again… That wasnt my house. He did this same sh*t to his ex. This time he just wants a little fame.

COMMENT: Wow, the dirtiness of that house, cps should be called!

CHERYL: Wasnt my damn house. So call them b*tch

COMMENT: it’s your choice to put those children in that environment, to each their own cheryl

CHERYL: Can do sh*t to my kids over a friends house. Like I said.. Call them. You seem pretty bored and need something to do anyways. Plus it will gove me a good laugh.

COMMENT: Alright! That’s it! I’ve heard enough of my cousins business getting twisted. You all need to hear this, in the past I’ve heard and witnessed a man trashing a house on purpose like slinging stuff around throwing things and then taking pictures to get the other person in trouble, so let’s really stay out of other people’s lives unless they were there watching the mental or physical or emotional abuse a man has caused.

COMMENT: um that house been dirty! You can tell that wasn’t done in the last day. As a women with children there is absolutely NO excuse to have children and pets living in filth like that! Since it’s your cousin go help her out clean that nasty trailer before cps takes those kids!

COMMENT: nahhh, that house has been nasty. Crushed up pills on the counter right Infront of her beside of her bed, p*ss pads all over the floors, garbage wrappers, used q tips, dirty clothes, empty Mountain Dew cans and pop bottles everywhere…..and kids toys everywhere… kids food on top of the dog crate…. pure nastiest that didn’t happen from a day or two of not cleaning either. She prob cleans her cooter just as often.

CHERYL: Once agian. Dumb a**es… That wasnt my house. Call who ever the f**k you want. They will loterally laugh at you. You hoes believe every b*tch boy that might want you.

CHERYL: It was a friends house. Not even his or mine. I wouldnt take him to mine. 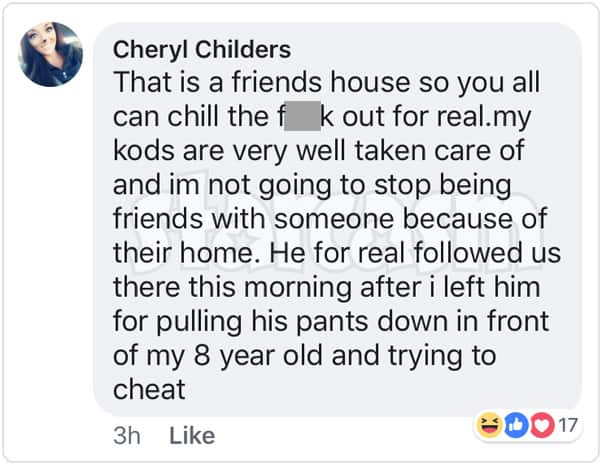 CHERYL: ? girl I should have listened to you guys. Yes it is. He is a dirt bag and we had to run from him to my friends house. He followed screaming and b*tching until i flipped.

CHERYL: Its my friends make up desk. Hes just Phyco. He followed my kids and I there after I left my house because he pulled his pants down infront of my 8 year old and wouldnt leave.