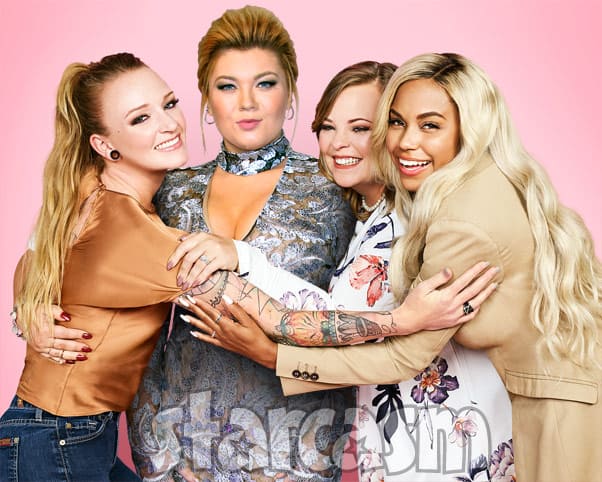 Teen Mom OG star Amber Portwood was in an Indiana court earlier today, but she was not alone. The 29-year-old reality star, who is facing multiple felony charges after a heated altercation with her boyfriend Andrew with their infant son James present, was joined by her Teen Mom OG co-stars Maci McKinney, Catelynn Baltierra, and Cheyenne Floyd. She was also joined by show producers and an MTV camera crew, ex Gary Shirley, and her mom Tonya.

Amber’s supportive Teen Momtourage received a bit of good news as Judge Angela Davis lifted the protective order against Amber in regards to her son James, opening the door for her to have supervised visits with him. The protective order preventing Amber from having contact with Andrew remains in place.

Catelynn revealed on Twitter that she was going to be with Amber for the hearing, but most fans were surprised to see Maci and Cheyenne in attendance. “There is always two sides to every story…” Catelynn tweeted on Wednesday. “u r only hearing one side ? sooo ✌? out I love you @AmberLPortwood I’m on my way to you now ❤️.”

Cheyenne shared a hotel room video of Catelynn on her Instagram story Wednesday evening in which Catelynn looks to be having a lot of fun while drinking what appears to be an orange juice drink from a Champagne flute: 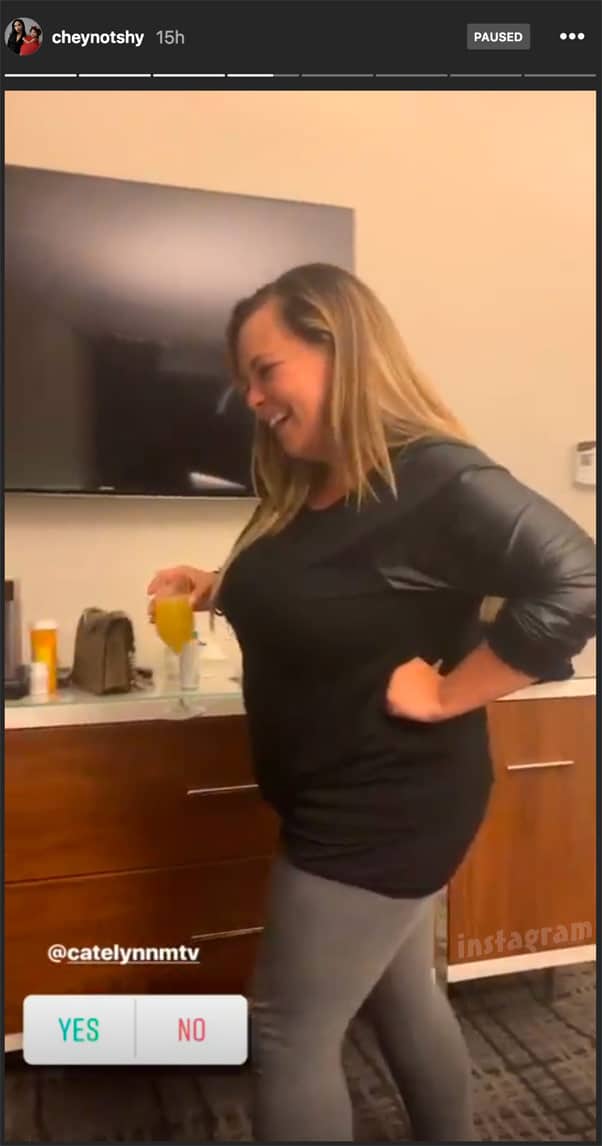 Catelynn’s comment about “two sides to every story” echos tweets made by Amber’s brother Shawn Portwood soon after her arrest on July 5. Amber admitted to police that she struck Andrew with a shoe while he was holding their son James, but Shawn stated that the evidence doesn’t support Andrew’s other claim that Amber went after him and James with a machete. Unfortunately for Amber, even if the felony charge of Criminal Recklessness committed with a deadly weapon is dropped, she still has two other felony charges remaining: Domestic Battery and Domestic Battery committed in the presence of a child less than 16 years old.

Reactions to the cast’s show of support for Amber from Teen Mom OG fans have been mixed. Detractors are quick to point out that there appears to be a bias in regards to female-on-male domestic violence. They pose the hypothetical of a dad on the show, who was previously convicted of domestic violence and drug charges, allegedly attacking a mom and her infant child with a deadly weapon. (The only dad from any of the Teen Mom franchises that comes close to fitting the bill would be Jenelle’s husband David Eason.) What wold the reaction be if all the other Teen Mom OG dads showed up in court to support him?

UPDATE – Andrew has since shared another post on Instagram and he replied to numerous comments about Amber’s arrest, the cheating allegations, and more. Click the link for a full recap!

As to whether or not Amber’s hearing (or anything about her most recent domestic violence arrest) will be featured on Teen Mom OG, that appears to still be undecided. “The girls were technically done filming for the season, but this is obviously such a big part of Amber’s current story, it has to be documented,” one behind-the-scenes source tells The Ashley. “What they do with the footage is still up in the air.”

The next scheduled court date is August 22, but court records indicate that it is an “attorneys only” pretrial conference, so I am guessing Amber (and her Teen Momtourage) will not be in attendance.

Here is a photo of Maci, Catelynn and Cheyenne with Amber, as well as a link to Radar Online’s story with more photos from the courthouse:

#AmberPortwood’s #TeenMomOG costars and producers came out to support her at her hearing today where her no contact order was lifted, granting her supervised visitation with her son. Amber was charged with domestic battery & criminal recklessness with a deadly weapon after she hit her boyfriend Andrew with a shoe while he was holding their baby & allegedly pulled a machete on them. How do you feel about Maci & Catelynn supporting her after the way they treated Farrah? Or Gary, considering she was previously charged w/domestic battery for beating him? Is Catelynn’s tweet victim blaming Andrew? MTV cameras were rolling for all of this btw. (? Radar Online)