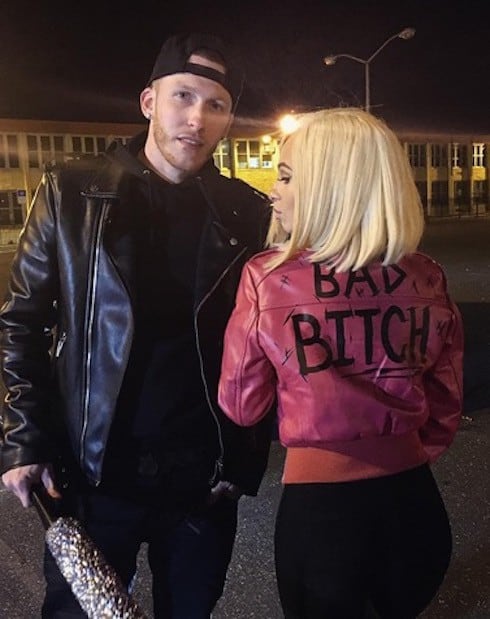 DJ Drewski, the newest addition to the LHHNY cast for Season 7, is also something of a landmark figure. In the man’s own words, he’s “the first white boy” to make it to featured player status on the ever-popular VH1 hit. And he’s not starting off slow, either: things between Drewski and fellow new addition Bianca Bonnie appear to be heating up something fierce–but Drew’s already got a steady girlfriend in the form of Sky Landish.

In fact, DJ Drewski has embraced his perhaps-inevitable nickname–”White Chocolate”–even as it’s come to represent his reliability with the ladies. He repped it on his own Instagram page once Love & Hip Hop New York Season 7 got underway:

And he’s taken to sharing it when others drop his name, thanks to the man’s now-growing visibility and rising reputation:

But Drew might have a problem-in that the sweetness of this white chocolate has attracted the attention of none other than Bianca Bonnie, aka the former Young B, who’s also joined the cast for this season. We knew before the season started that Bianca would be involved in a love triangle this year–and it was believed to be between herself, boyfriend Rotimi (best known for playing Dre on Power), and none other than Drake, who allegedly had a fling with Bianca over the summer. However, it now looks like it’s Drew and Bianca who might be getting together. At least, we know that Drew isn’t shy about teasing the possibility with fans:

Monday 8pm on @VH1, find out what's really going down on #lhhny pic.twitter.com/UQGwgbtQpZ

And Bianca has been having a good time playing along:

You can follow DJ Drewski on Instagram here and on Twitter here. And you can catch his exploits with Bianca Bonnie and the rest of the LHHNY Season 7 cast when the show airs Monday nights at 8 on VH1.

RELATED ARTICLES: Bianca Bonnie has love triangle issues of her own for LHHNY Season 7