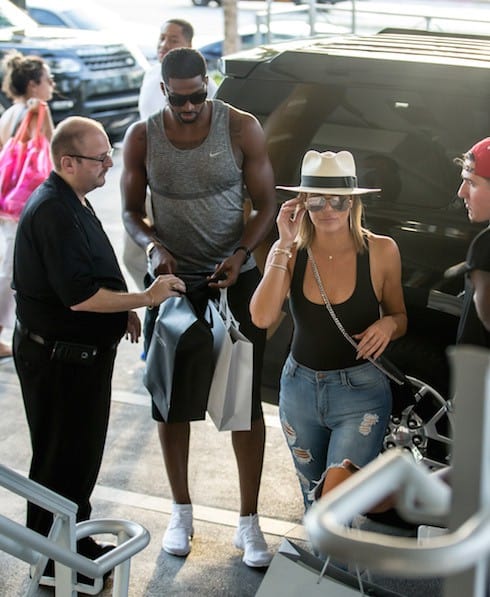 Reports on Khloe Kardashian and Tristan Thompson engaged threatened to wash out the internet tonight, in a wave reminiscent of this morning’s widespread hacking outages. According to a whole bunch of different sources–several of them legitimate!–the pair are not only engaged to be married, but are pregnant (something that’s been rumored for at least a week) and are totally fine with filming their nuptuals for a yet-to-be-scheduled Keeping Up With The Kardashians special. We reported earlier this week that Khloe and Tristan were supposedly allegedly expecting a child together; a few weeks before that, their relationship appeared to heat up following the news that Kris Jenner had given Tristan her blessing. The 25-year-old Canadian and his 32-year-old Calabasan sweetheart began seeing each other in late summer.

But is there any truth to the rumors, or is this just a story meant to distract from the possibility that KUWTK has been canceled? They run the gamut: Hollywood Gossip, for one site, is all-in with the allegations, stating flatly that the pair are “engaged” (followed by five exclamation points). They go on to explain that Khloe and Tristan “they are also planning to star in their very own reality TV show and get married in a global television event.” And, as skeptics have already noted, the root of the claim comes from a source supposedly close to Kris Jenner, who in turn says that the momager is “terrified that fans will lose interest [in KUWTK]” and “desperately wants a new project to work on and thinks Khloé and Tristan’s show would be ratings gold.”

From there, Sports Illustrated reported on the tabloid piece, as did the New York Daily News. The NYDN was noticeably more skeptical, though, pointing out that the story was “in doubt” and possibly a reaction to the confirmed news that Tristan’s ex-girlfriend Jordy C is currently pregnant with his first child.

Nor are the tabloids the only publications with anonymous sources. ESPN has them, too–and theirs say the story is pure hokum:

A source close to Tristan Thompson tells ESPN the story re: his engagement to Khloe Kardashian/reality TV series is false on both counts

Kardashian home network E! went so far as to get Khloe’s own personal response to the rumors:

The case of Khloe’s mysterious pregnancy marks the third such rumor to strike the Kardashian family in the past two weeks, following Kylie Jenner and Tyga’s alleged little one and Kourtney Kardashian and Scott Disick’s fourth bundle of joy. Reports that Kim Kardashian pregnancy rumors have struck again in order to distract from the earlier rumor that she faked her Paris hotel robbery could not be substantiated.

Black Ink Compton in the works: Spinoff may be coming in late 2019

Kim Kardashian credits secret surgery with helping her get pregnant