This right here is the good tea we’ve been waiting for. Earlier this month, Love & Hip Hop Hollywood newbie Summer Bunni and Lyrica Anderson allegedly got into a nasty brawl during filming. Apparently, things between the two of them had been brewing for weeks, following rumors that Summer and A1 had either slept together or at least messed around.

But the physical fight turned out to be only the beginning of the battle: after throwing hands, Summer went on Instagram and loaded up her IG stories with a long chain of claims about Lyrica and A1, including addressing A1’s alleged homosexuality, Lyrica’s apparent threats against Summer from a fake number, and plenty more.

Before we get to all the tea Summer may have spilled, here’s what we know about the fight between Summer Bunni and Lyrica. Gossip account @VH1iNFO was the first to report on trouble between Lyrica, A1, and an unnamed member of the cast a few days ago:

a1 and lyrics are back and apparently are on strike after lyrics got into with a cast member and got physically hurt. #LHHH

Then, a couple of days later, it emerged that Summer was the one who’d been responsible for hurting Lyrica via physical attack:

And it looks like that might not have been the last of the damage Summer supposedly caused: she’s said to be “causing havoc on set” and forcing other cast members to keep their distance.

But details about that part of the story are still emerging. What we know for sure is that Summer did not hold back when it came to calling Lyrica and A1 out in public. In the first part of Summer’s IG story, she calls Lyrica a “f*cking joke” who always “stayed pu$$y like a bitch” whenever the two crossed paths before Summer joined the LHHH cast: 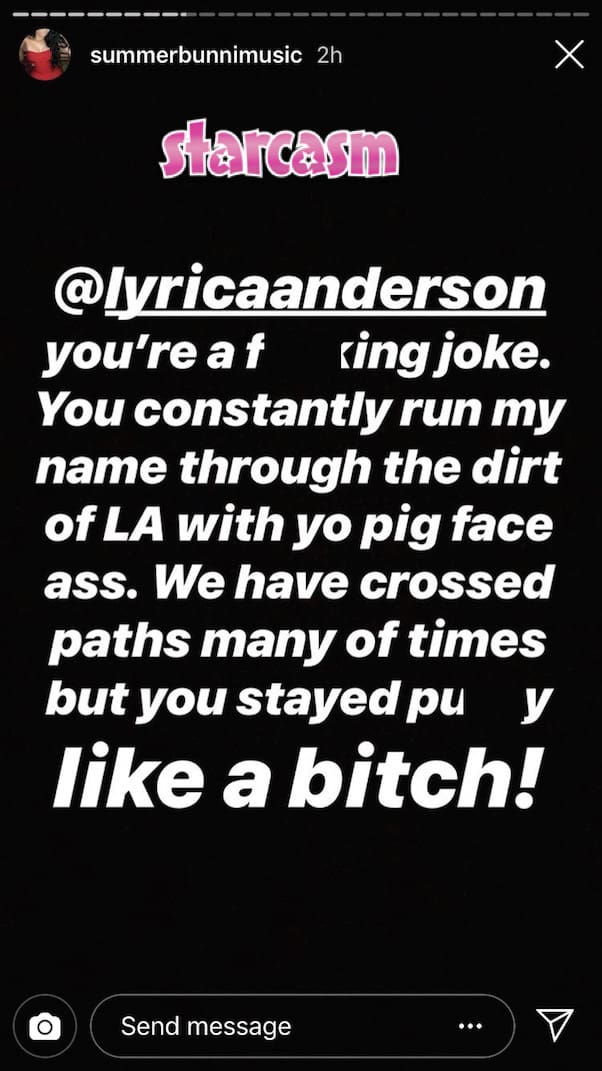 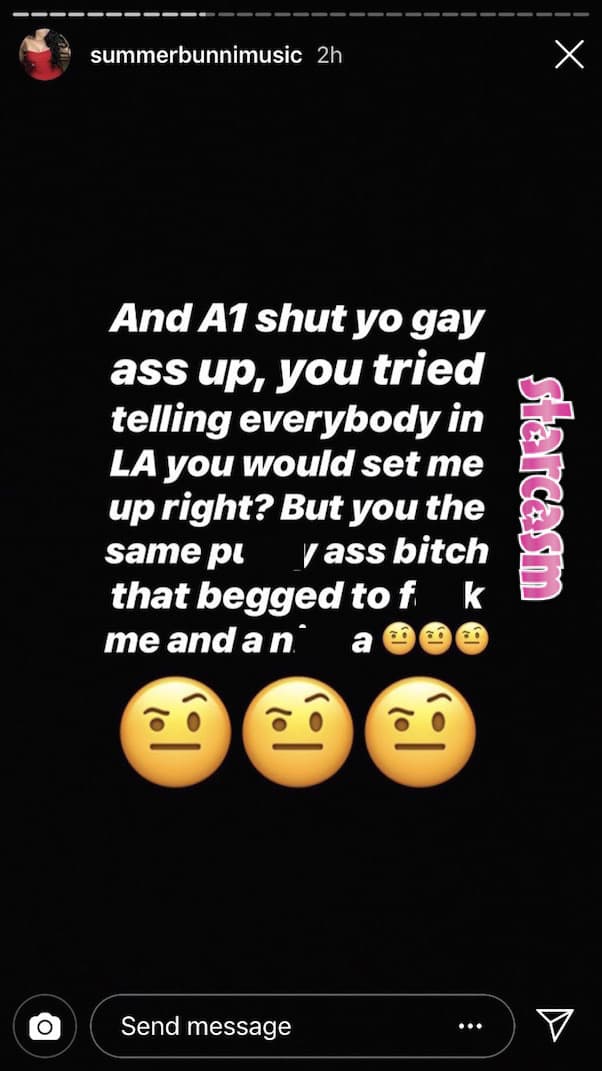 From here, we’ll pretty much let Summer’s insults speak for themselves (not least of all because, to quote George Michael Bluth, if we clean it up it not really a sentence). One particularly vivid image is Summer calling A1 a “dusty ass rabbit dick ass n!gga”: 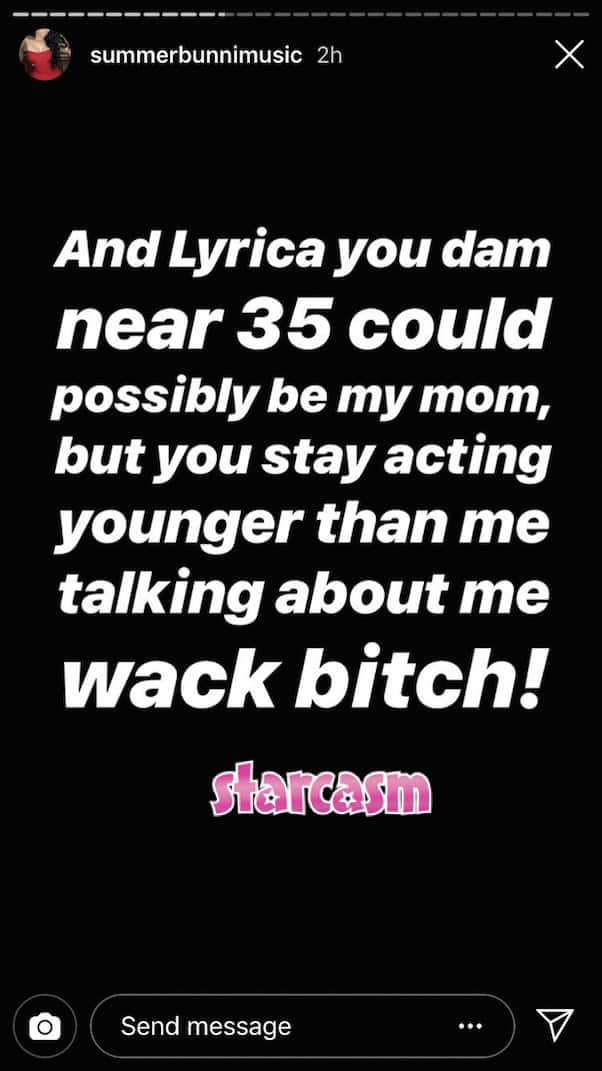 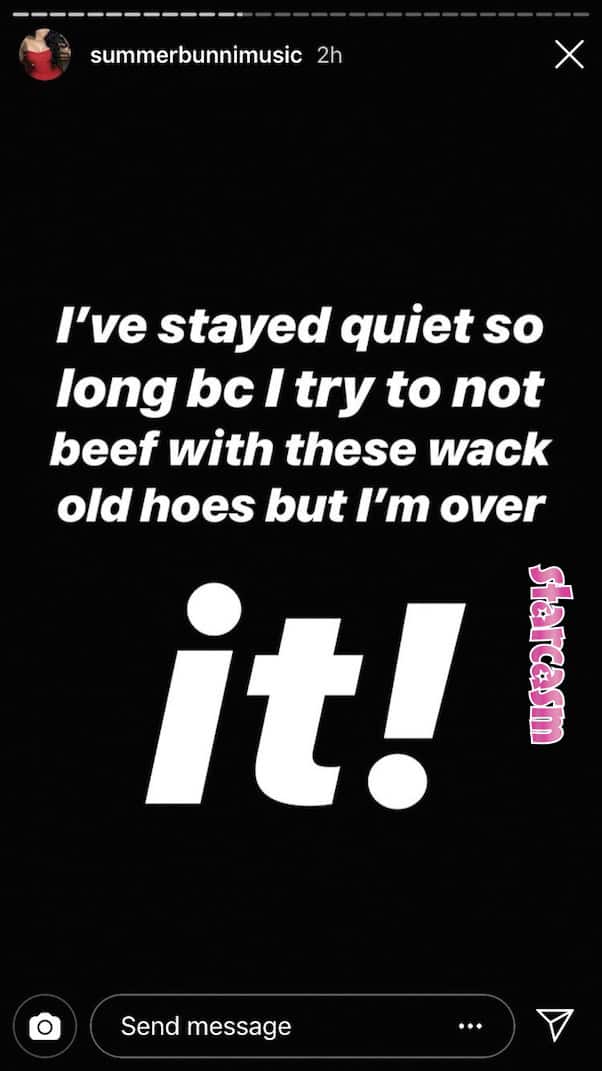 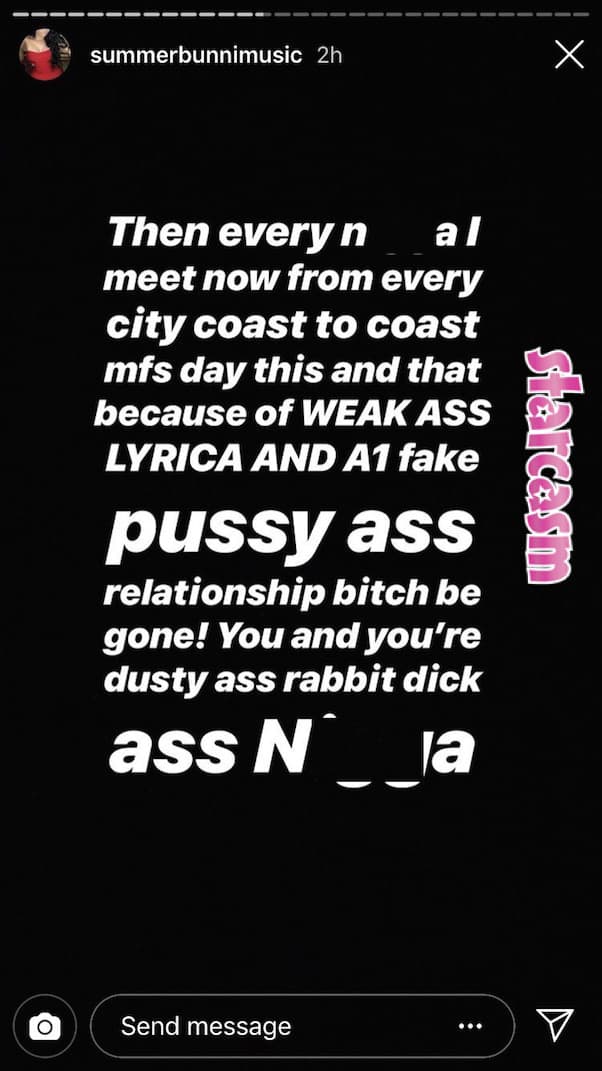 At one point, Summer’s fellow LHHH co-star Jason Lee comes into the picture, for apparently “running [Summer’s] name” and stalking a friend of hers: 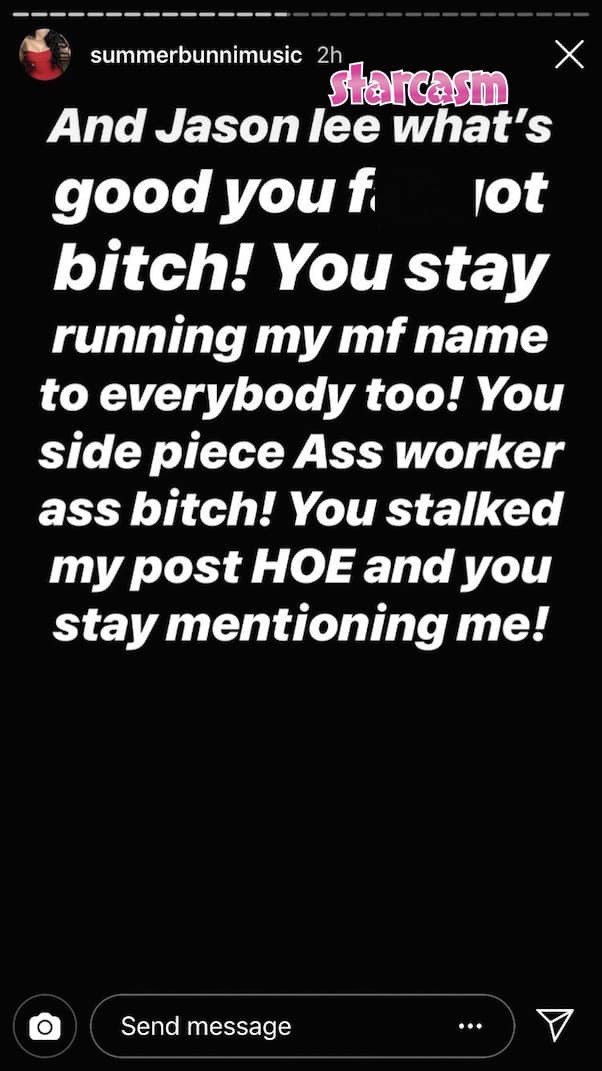 But mostly Summer Bunni and Lyrica (and A1) get the bulk of the attention: 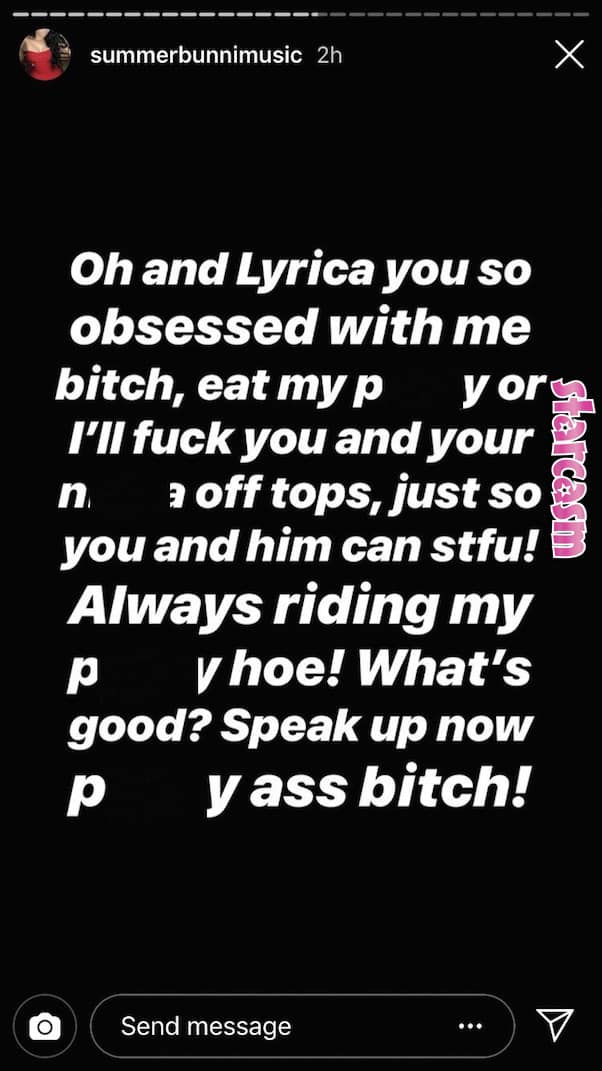 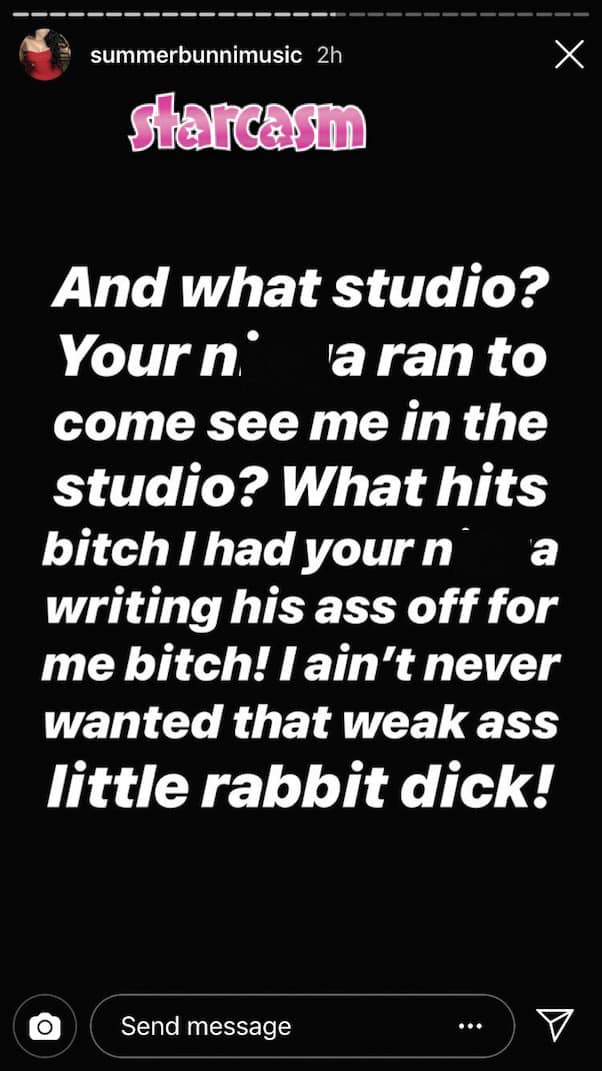 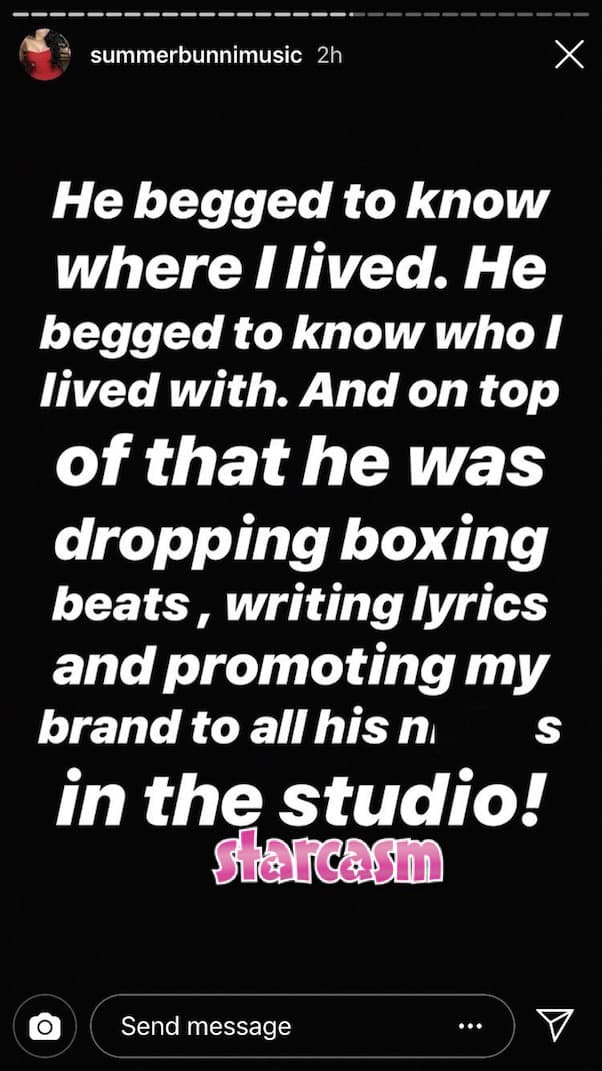 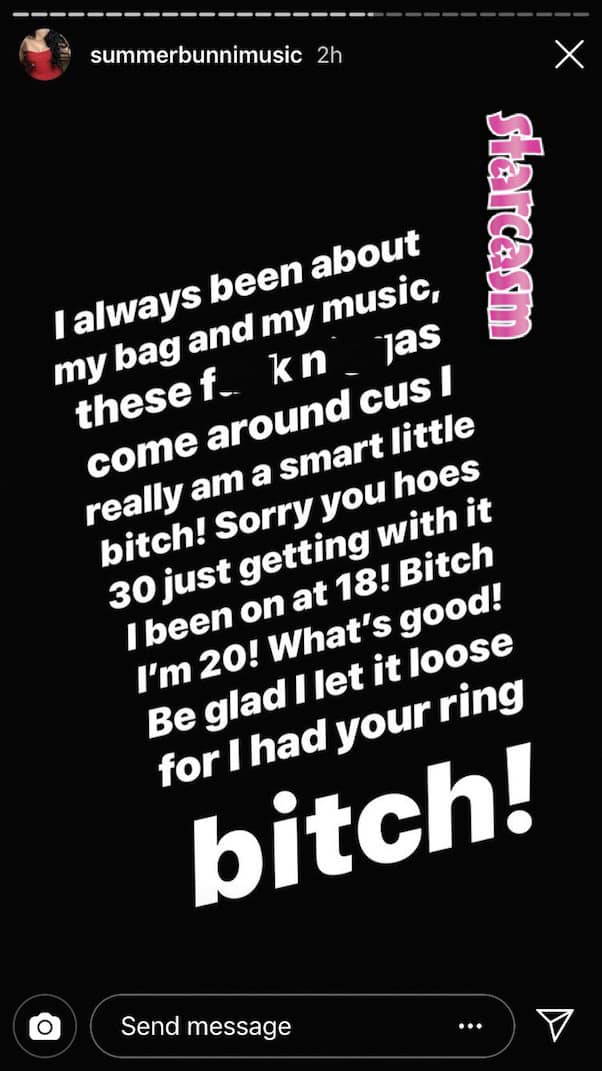 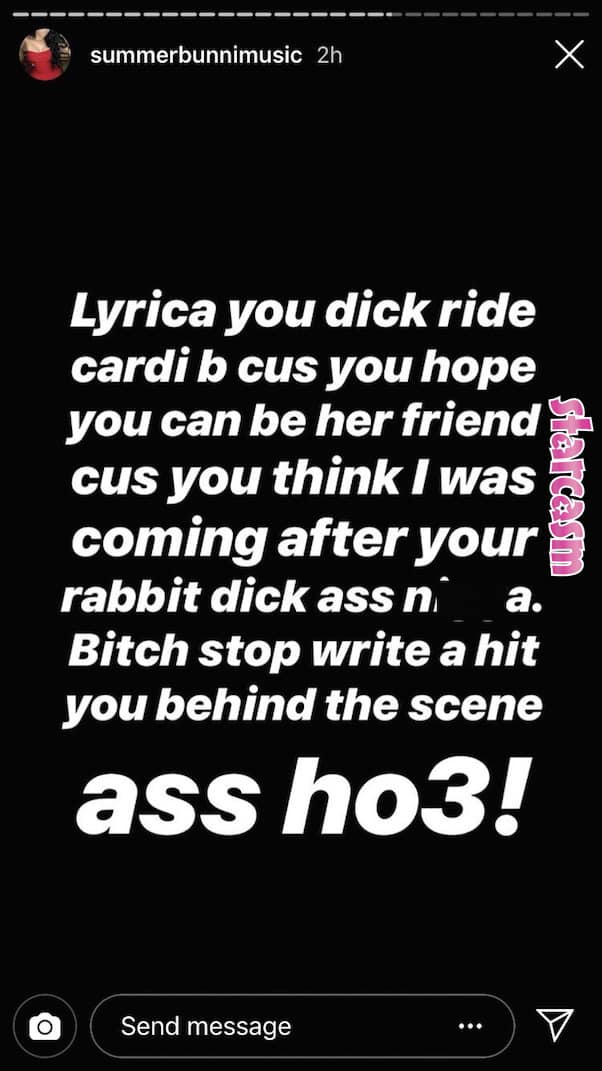 The final two images in the sequence are screenshots of threats Summer says Lyrica sent to her from a fake number: 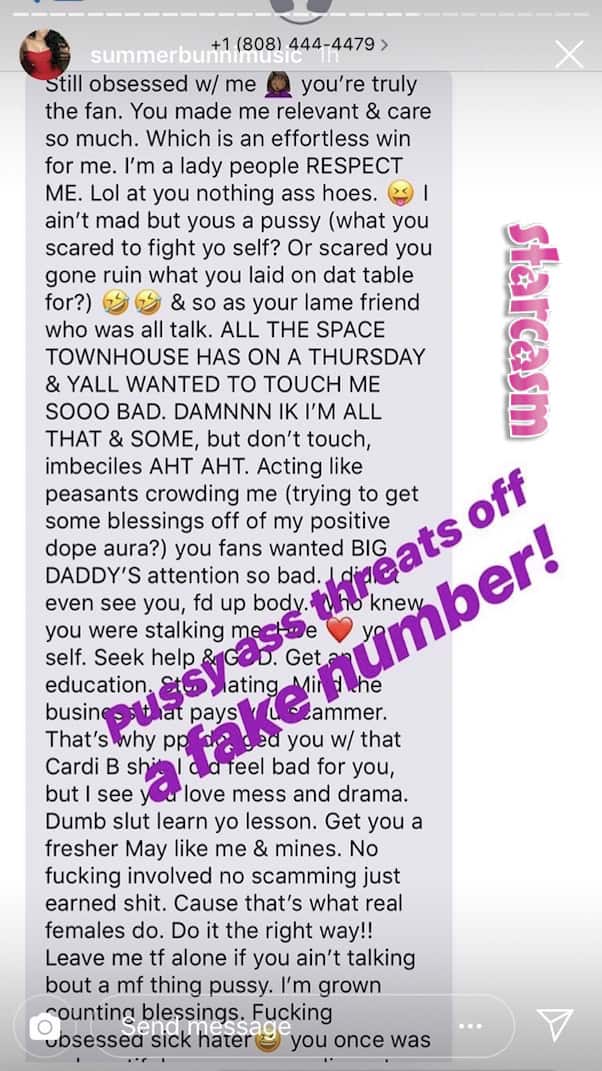 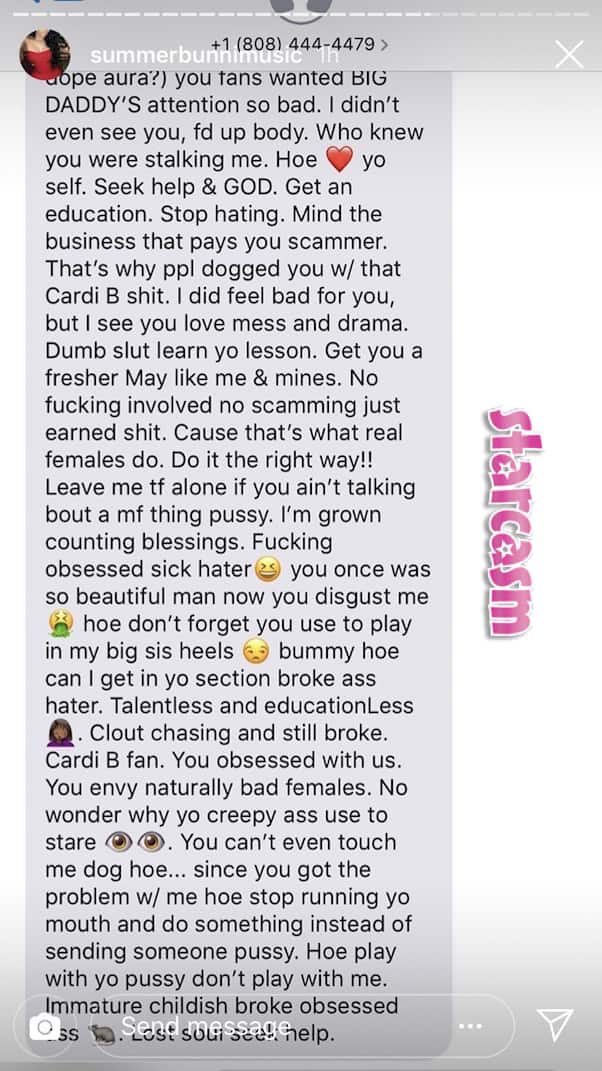 So far, neither Summer nor Lyrica nor A1 have addressed the controversy publicly. But it won’t be long before we find out more details from the show itself: Love & Hip Hop Hollywood Season 6 will premiere this summer.