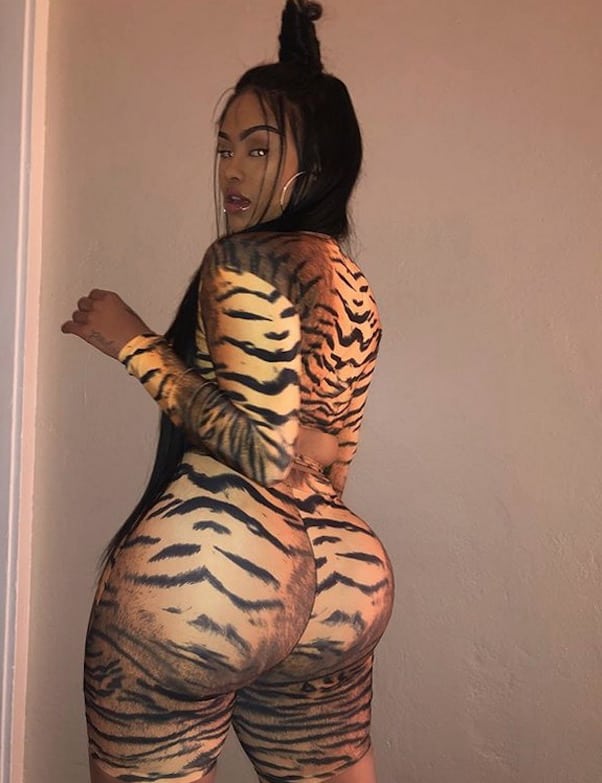 This Summer Bunni LHHH situation is heating up something fierce! The show’s newest cast member has been mixing it up for months with former lovers A1 Bentley and Lyrica Anderson, who’ve since split up over A1’s alleged affair with Summer. Last night, Summer again took to social media to spill the couple’s tea once more, sharing what she says is A1’s latest attempt at smearing her now that the gossip mill is spinning out of control.

In case you need to get caught up on the drama between these three, here’s a quick refresher. Not long after Lyrica gave birth to Ocean Zion Bentley, she and A1’s first baby together, filming began for Love & Hip Hop Hollywood Season 6. The biggest new addition to the cast was Summer Bunni, Offset’s alleged mistress, who’s been angling for a career in the music business for some time. Summer began working in the studio with A1, but, according to her, he wanted to make things physical and the two of them wound up sleeping together.

The A1 and Summer Bunni LHHH affair was ultimately the reason Lyrica split up with A1 earlier this summer. But, while all of this drama was going down, things were getting a different kind of physical: we’ve also reported on multiple allegations of fistfights involving Summer Bunni on set. Word on the street is that Summer and Lyrica have gotten into at least one fight while filming LHHH Season 6, and that A1 has likewise brawled with Summer’s manager Antonio Velaz.

For her part, Lyrica may be moving on; she’s rumored to be either dating or possibly just having a good time with former boxing champion Floyd Mayweather. (This may also have been a bit of trolling on Lyrica’s part, since A1’s real name is also Floyd.) But, according to Summer, A1 won’t stop harassing and threatening her, and he’s stopped taking her calls when she tries to reach out. So, yesterday, she took to Instagram to air her latest grievances, again directing them directly at A1 and Lyrica.

Here’s Summer’s since-deleted post, which includes a screenshot of A1’s entry in her contacts, and the allegations — also involving producer Mally Mall — in a long caption below. We’ve transcribed the caption beneath the image: 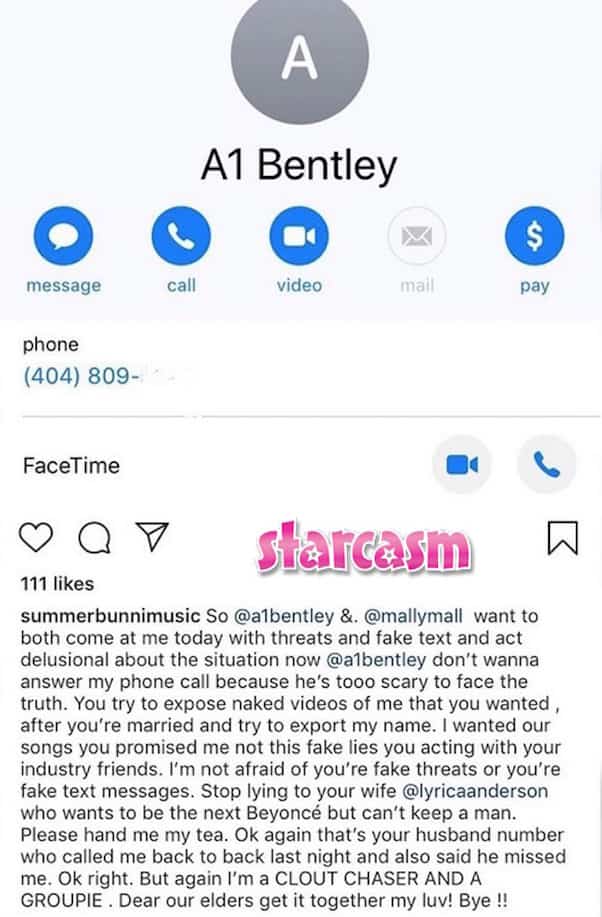 So @a1bentley &. @mallymall want to both come at me today with threats and fake text and act delusional about the situation now @a1bentley don’t wanna answer my phone call because he’s tooo scar[ed] to face the truth. You try to expose naked videos of me that you wanted , after you’re married and try to [extort] my name. I wanted our songs you promised me not this fake lies you acting with your industry friends. I’m not afraid of you’re fake threats or your fake text messages. Stop lying to your wife @lyricaanderson who wants to be the next Beyoncé but can’t keep a man. Please hand me my tea. Ok again that’s your husband number who called me back to back last night and also said he missed me. Ok right. But again I’m a CLOUT CHASER AND A GROUPIE . Dear our elders get it together my luv! Bye !!

(As a quick aside, we’ll point out that 404 is an Atlanta area code. As far as we’ve known, though, A1 has never lived in the ATL: he grew up in Kansas City, was homeless for a time, and then moved out to the West Coast to try and make it in the music industry.)

But apparently that wasn’t the end of this round of drama. A few hours later, after she’d deleted the above message, Summer uploaded a new pic. It seems Lyrica lodged a formal complaint with Instagram over Summer’s posts, the result of which is she’s been banned from using IG Live until July 30th: 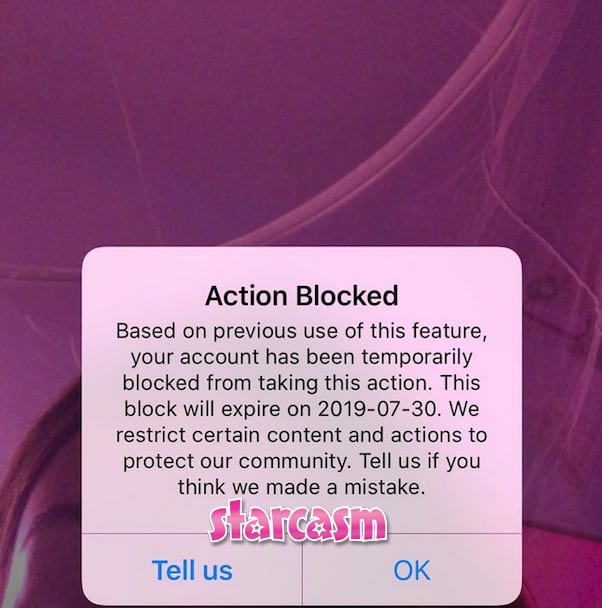 On the bright side, July 30 is a week before the LHHH Season 6 premiere. Once her ban is up, Summer will have plenty of time to spill more tea before the much-anticipated season gets properly underway.