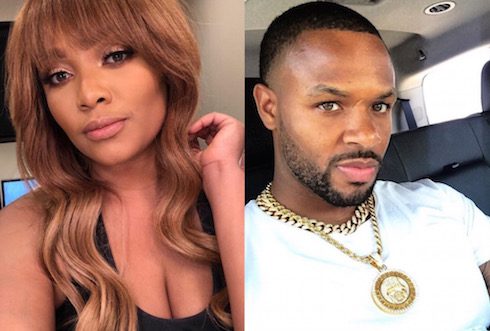 Teairra Mari and her now ex-boyfriend Akbar Abdul-Ahad blew it up on last week’s episode of Love & Hip Hop Hollywood, following the leak of Teairra’s sex tape. However, in the days since, new details appear to potentially suggest that Teairra and Akbar’s whole storyline might have been manufactured for the show. On top of that, a new video clip involving Teairra and Abdul suggests it’s possible that the two of them are actually still together.

Teairra and Abdul initially went to court over her sex tape

Teairra was proud and defiant after her sex tape went public earlier this year. Immediately following the leak, Teairra announced at a press conference she would be “in pursuit of justice” and specifically called the leak “revenge p0rn,” which is indeed a crime under California law.

At the time, Teairra’s attention focused on two men: Akbar and 50 Cent, who Teairra claimed worsened the sex tape’s impact because he shared a screengrab from the video on his Instagram page after Teairra had deleted the material from her own.

Very quickly, though, several high-profile LHHH associates began to voice doubt about Teairra’s story. The most prominent among them was former cast member Milan Christopher, who claimed he’d been with Teairra on the morning of the leak and couldn’t find what she was talking about on the internet. After he told her this, Teairra disappeared briefly, then reappeared and told him to look again. Milan concluded that Teairra had leaked the tape herself, and that initially it hadn’t gone public at the time Teairra had arranged.

Thanks to a new report from Bossip, we now know that the latest development in Teairra and Akbar’s legal battle is an eyebrow raiser. According to their article, Akbar “has basically blown off Teairra’s suit.”

Teairra’s lawyer claimed in court this week that though Akbar was served at “three different addresses,” he “never responded to the lawsuit,” and did not appear in court for a recent scheduled hearing. However, Teairra wasn’t able to have Akbar put in default, since she never included in the papers with which he’d been served “a statement of the punitive damages she is seeking.”

These new developments look fishy for two reasons. One, there’s precedent in the Love & Hip Hop universe of cast members blowing off legal appearances after the credulity of their storyline has come under fire. Last year, at the height of the paternity gossip regarding Love & Hip Hop Atlanta‘s Kirk Frost and Jasmine Washington, the two bailed on court shortly before settling out of court and letting the heat die down. Something similar happened with Stevie J and Joseline Hernandez shortly before the LHHATL couple announced that Stevie was, in fact, the father of Joseline’s then-unborn daughter Bella.

Two, it’s unusual that Teairra and her attorney wouldn’t have worked out a specific amount of money to ask for from Akbar in the form of punitive damages. In high-profile lawsuits like these, that amount is generally one of the very first things made public, since a huge sum makes headlines whether or not a judge ever awards anything close to the amount. And Akbar was apparently served three times. It’s hard to believe that any legal professional would forget to list punitive damages in a celebrity lawsuit one time, let alone three.

(On a related note, 50 Cent has been officially dismissed from Teairra’s lawsuit; the judge in her case agreed with 50’s lawyer that “under what’s known as an ‘anti-SLAPP‘ motion…he had a constitutional right to report [the sex tape] under his right to free speech.”)

Teairra and Akbar may actually still be together

We should point out one more thing about this particular story. Earlier this week, a clip involving Teairra and Akbar made the rounds because of what it appeared to depict: namely, Teairra and Alejandra, Akbar’s side piece, arguing outside of Akbar’s house. Allegedly, the arguing in the clip — which Akbar himself shared on IG Live — started over Teairra and Alejandra mixing up the dates and times they’re supposed to visit their man.

Here’s the clip, captured in its glory by the intrepid tea spillers over at @JaysRealityBlog:

VH1 hasn’t even debuted the midseason trailer for LHHH Season 5 yet, so this storyline has a *long* way to go.