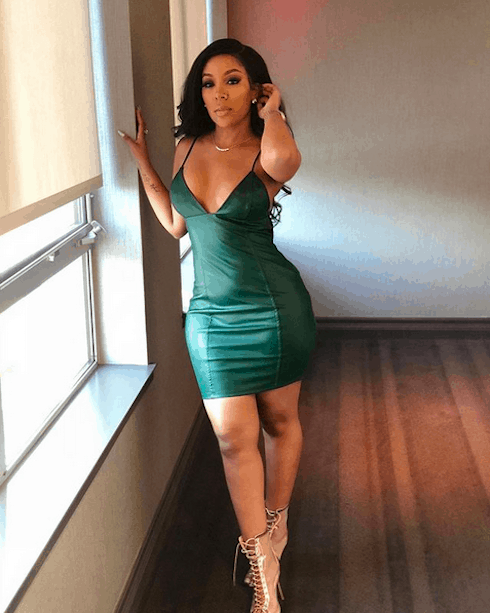 K Michelle’s recent fight with A1 on Love & Hip Hop Hollywood brought up an unpleasant allegation from her past. But is K Michelle banned from radio — and has the banning really affected her career? Unfortunately, the story doesn’t make Kimberly look very good, and it looks like the fallout continues to depress her album sales (though her social media following remains one of the biggest in all Love & Hip Hop).

First of all, here’s K. Michelle’s fight with A1, in all its glory. A1 specifically mentions “missing appearances” as the reason for Kimberly’s mysterious ban:

However, the ban itself actually went into effect well before A1 started working with K. Michelle. It stems from a controversial — if understandable — decision she made to blow off a heavily promoted morning promp back in 2016.

As Bossip reported at the time, K. Michelle was scheduled to appear alongside Washington DC DJs Lil’ Mo and DJ QuickSilva at a fan breakfast in the spring of 2016, in order to promote the DJs’ new morning show and K. Michelle’s new album More Issues Than Vogue.

K. Michelle had wanted to spend the night at the DC Ritz Carlton the night before the event. But the hotel was booked, and she wound up at a hotel in Silver Spring MD — an hour’s drive from the radio station. But K. Michelle “supposedly…did not want to take up early” and make the drive “because she wanted to sleep.” (We haven’t been able to find out exactly when the fan breakfast was scheduled to start. But, at the time, The FAM aired weekdays from 6 to 10 AM.)

Temporarily complicating matters was the fact that the day of the fan breakfast was April 1st. So, for a little while, “the co-hosts—Lil’ Mo, DJ QuickSilva and Britt Waters—and the 50 fans that gathered at the studio thought it was an April Fools prank when they were told that the Love & Hip Hop star decided to no-show.”

Things soured after it emerged that one fan “had decided to skip her chemotherapy treatment that morning” in order to meet K. Michelle. Not long after, Radio One announced they were pulling K. Michelle’s music from rotation at all 55 of their stations across the country.

Has K Michelle banned from radio damaged her career at all?

As of this writing, Radio One — an arm of Urban One, the largest black-owned media company in the United States — owns 54 radio stations in 15 different cities, among them the major markets of Atlanta; Houston; Philadelphia; the Ohio triumvirate of Cincinnati, Columbus, and Cleveland; and the greater Baltimore / Washington DC area.

We can’t say definitively that K. Michelle’s choice of sleep over breakfast with fans has been the biggest reason for her chart decline over the last two years. But, for whatever reason, there has been a decline. Kimberly: The People I Used To Know, K. Michelle’s first album since the ban went into effect, came out last December, debuting at #56 on the chart.

With that said, it’s also worth noting that K. Michelle still has Love & Hip Hop Hollywood‘s biggest social media reach. Her Instagram following alone is 5.5 million, or more than the next three most-followed cast members combined.

How much money has Paula Deen lost from her N-Word scandal?