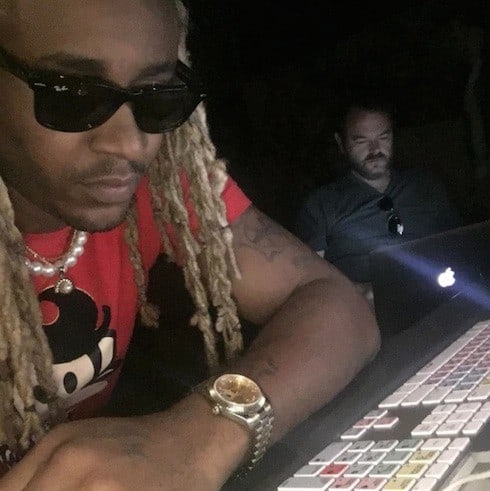 The buzz around Lyrica Anderson following her Love & Hip Hop Hollywood debut is palpable, and interest in the 27-year-old musician appears to be at an all-time high. Given her successful rollout on the show, then, it’s unsurprising that a follow-up question would be sweeping through the ranks of the LHHH viewership–namely, who is A1 Bentley, Lyrica’s devoted fiancé and a noted rapper and musician in his own right?

A1–whose real name is Floyd Bentley–grew up “on the rough side of Kansas City,” per his official bio, but managed to rise up and make it to college. Floyd played basketball for three years, but realized that his true passion lay elsewhere…and so, with nothing more than $800 and a heart full of dreams, he packed up and headed for Los Angeles to try and make it in the music business. A1 was actually homeless, for a time, before a chance encounter with famed producer Raphael Saadiq turned everything around.

In fact, since 2012, A1 has worked alongside some of the biggest names in R&B and hip-hop–and gotten some of them to work with him, as well. “Lost At Home,” from A1’s “Never Ever Always” mixtape, features Drake, and remains one of his most popular tracks:

But even bigger brushes with fame came when A1 was invited to help craft Chris Brown’s 2015 mega-hit Royalty. One of the tracks he worked on, the trap-heavy “Wrist,” both made the album and helped draw some of its most heated attention. It’s also worth pointing out that “Wrist” features songwriting contributions from both A1 and now-fiancée Lyrica Anderson:

But those sessions weren’t the first time the two came together, as they shared recently for a VH1 exclusive. However, the recording studio was a major factor in their meeting: while in the studio with a mutual friend from New York, who’d flown out to Los Angeles for a recording session, A1 and Lyrica bumped into each other in the elevator. “I met her in the elevator coming up,” A1 revealed, “and I was like, ‘Wow! I need this.’

“I was just trying to figure out what session she was going to–she ended up going to the same session I was,” explained. “So, as soon as we got in there, I was just on her. And she was on me too! We was, like, flirting back and forth.”

Lyrica also shared that one of the things she appreciates about A1 is the fact that his background means he’s not like other men she’s dated. “Him being from Kansas City, Missouri, I feel like gives him a different vibe than a typical LA dude,” she said. “It’s just a different swag, a little more hospitable, down south, a little more gentleman…more so, like, enjoys catering to their woman. And that’s really important to us.”

The fact that both are in music makes them the “perfect match,” agrees A1. “We can do things together. And we actually do everything together–everything.”

Indeed, it wasn’t long before the two started working together, dropping tracks like “Miss Me,” which at least one reviewer noted “pulses with the fierce beat of A1 and Lyrica’s professional passions–as well as their personal love”:

That love was further evident in the super-sweet, super-sincere birthday message for A1 that Lyrica recently shared on social media:

Very Seldom in Life do you meet someone who is your total match .. Who’s just like you!! But I’m Very thankful and Blessed To Say I Met someone who not only loves and cares about me but takes the time to understand me ! .. What a talented Smart giving loving person you are @papichuloh And I’m So Happy To Have you apart of my life ! Happy Birthday you sexy lips baby you! You really make life fun! I love you so much and if I don’t tell you enough you are truly appreciated !!! I love you and wishing You the happiest birthday EVER and many more blessed birthdays to come !! Happy Birthday @papichuloh ???????????????????

As far as social media goes, you can follow A1 on Instagram here, and on Twitter here. And, as always, you can check him out on TV, too: Love & Hip Hop Hollywood airs Monday nights on VH1.