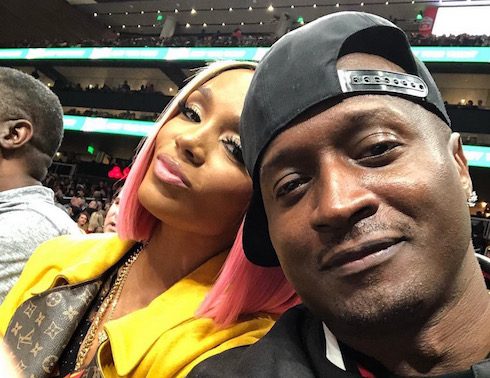 If you’re as burned out on the Kirk Frost baby daddy drama as we are, you’ll want to take this with a grain of salt. But a pair of new reports claims that Kirk and Rasheeda are expecting a baby — and that Kirk has gotten yet another side chick pregnant as well. And in true over-the-top fashion, LHHATL Season 8 is expected to feature both storylines.

In case you’ve managed to forget all about Kirk’s philandering ways over the past couple of seasons, here’s a quick refresher. Kirk had a baby named Kannon with a woman named Jasmine Washington; he refused to take a paternity test for ages, before finally consenting, acknowledging that Kannon is his, and settling Jasmine’s paternity suit out of court.

Rasheeda, however, was not cool with this. They were separated for some time, but appeared to be on the verge of potentially patching things up just before LHHATL Season 7 started airing. They recently celebrated their 19th wedding anniversary, and Rasheeda told OK! Magazine late last year that she and Kirk are “in a good place,” partly because they have a lot of things to deal with “as business partners.”

(Oh — and there’s also a second side chick Kirk Frost allegedly got pregnant during the Jasmine Washington era. However, she’s never come forward, and is said to have had an abortion.)

So — now that we’re done with all that, it’s on to the latest round of Kirk Frost baby gossip. The first of the two aforementioned reports is that Kirk and Rasheeda are expecting another child together. The baby, which would be Kirk’s eighth overall, is apparently going to be Kirk and Rasheeda’s “main storyline in the coming season of” LHHATL.

Said one alleged insider, “We were tired of the whole cheating drama. This season Kirk & Rasheeda are going to have a positive storyline surrounding her having a baby.”

However, we’re pretty skeptical about this report. Rasheeda was said to be four months pregnant when the gossip first broke; based on that timeline, she would be just about ready to give birth right now. So, unless she’s been fronting on her social media pages for a very long time…

Just landed in Houston to spend the day at @pressedhouston713 so pull-up located in the Galleria on the 2nd floor right outside Neiman Marcus come shop wit us ?

…or unless the source got their dates way wrong, it seems unlikely that Rasheeda is pregnant with anyone’s baby right now.

At the same time, we have another anonymous insider claiming that Kirk has another one coming on the side. Per that report, the woman in question is an Atlanta native who “worked as a dancer” in the city. She’s apparently “Latina,” and “young, pretty, and ratchet.”

Said the source, “Rasheeda is going to fall out when she sees this girl. She’s crazy like Joseline, and says she’s keeping the baby.”

This gossip sounds more likely, if only because it’s happened before. But honestly, even if it turns out to be real, it’s hard to imagine Love & Hip Hop Atlanta‘s viewers reacting with anything other than a big sigh. There’s been nothing but baby daddy drama from Kirk for *years* now. It would be nice to see him spend an entire season just playing with his kids — literally just building things out of blocks with them and pushing them on swings and watching him smile when they get math homework right. And Stevie J, if you’re reading, the same goes for you.

Does Betty White have a sex tape with late husband Allen Ludden?