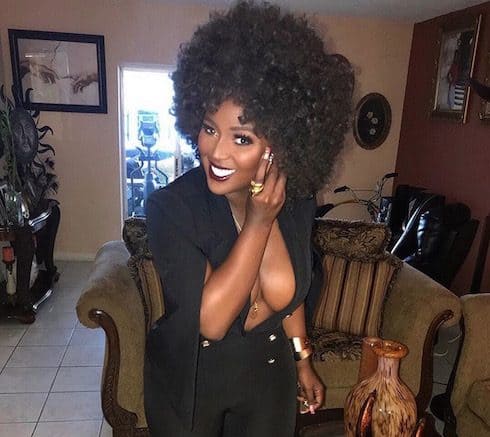 Amara La Negra’s hair is getting the 27-year-old Love & Hip Hop Miami star almost as much attention as her singing. According to Amara, her fabulous look is all-natural, and comes from her outspoken desire to represent her ethnic roots–and the many others who look like her–as genuinely as possible.

As we recently wrote, Amara is eager to prove to the world that Latina beauty is about more than JLo and Shakira. “There’s women that look like myself in every single Latin country,” she said. “By the end of this season of Love & Hip Hop Miami, I definitely want people who don’t know about Afro-Latinos to get informed. [Afro-Latinas] have been here, and nobody has really spoken about us.”

But the Miami-born, Dominican-bred got even more passionate about the topic in an interview with Latina, one in which she described the music industry “bullsh!t” she’s had to put up with regarding her looks. To hear her tell it, Amara La Negra’s hair is both the armor that’s defended her against criticism and the weapon that’s enabled her to fight back:

Being an Afro-Latina in the Latin market is particularly difficult, because you essentially have to work twice as hard to prove yourself. As much as people want to say that racism is over and it doesn’t exist, it does, especially in the Latin market. When they talk about a Latina, they talk about Sofia Vergara or Jennifer Lopez, Shakira even. But not anyone who looks like me, and I’m 100 percent Latina.

I’ve been in novelas, but the roles that are carved out for us are more often than not stereotypical. You’re a slave, a drug addict, a gangster, or a murderer — those kind of roles. It’s tough to land a serious role. And anytime I say stuff like this, people are in shock. Like they can’t believe I just said racism is alive or something. Listen, I can only speak from my own personal experience.

One of the reasons I’m so rebellious and I wear my hair from my head attached to my body, is because for many years I was told this bullsh!t lie that in order to be beautiful, I had to have straight hair, because my hair was too “unmanageable.” Hello! I’m black. Yes, I’m going to have nappy and kinky hair. But that’s part of what makes me beautiful. And it took me years to know and realize that. I’m straightening and burning my hair for what? To please who? I was doing it to try and fit into society.

Elsewhere, Amara reaffirmed that her defiance is rooted in positivity. “In this industry you get told ‘no’ every single day,” she explained; “They will always find something wrong with you. And in order to survive in this, you got to be confident. I’m comfortable in my skin, I’m proud of who I am, I love me.”

On that note, Amara also recently took to Instagram to dispel notions about her ethnicity — specifically, that she’s been treating her hair and skin to make herself look darker than her natural color. The Miami-born, Dominican-bred star has been outspoken about her Afro-Latina roots for years, but it seems that increased public exposure thanks to her prominence among the Love & Hip Hop Miami cast has led to a lot of gossip.

Here’s Amara’s take on her appearance, with a transcript beneath the embed:

Hope this Answers your Questions…. Im not in “BLACK FACE” theres nothing fake or weird about my skin color! I don’t take “ MELANIN SHOTS” I don’t Spray My Skin in any way. @vh1 @thelhhtea @lovehiphopvh1 @loveandhiphopmiamifl @thelovehiphopfights @loveandhiphoptea4u #LHHMIA #LHHMIAMI

Please! Stop asking me if I’m doing blackface! I am not doing blackface — there’s nothing wrong with my face! What the f is wrong with my face? There’s nothing wrong with my face! Oh, that my features don’t even match my face. [Long pause] What does that even mean? ‘Uh, you have white people features.’ [Long pause] What does that even mean? ‘Oh, you look white, but you look like you painted yourself.’ ‘Oh, are you taking melanin shots?’ Or, ‘Are you’ — Dude! I’m black! I’m Dominican! I’m Afro-Latina! Like, what do you want me to tell you? Google it. Google it. Educate yourself a little bit. Go study somewhere. Go check it out yourself. No, I don’t take melanin shots, I’m not doing blackface, I never have — why would I even do that? Um, hello. So: stop it! Stop! You guys are so annoying.

Hopefully we just did our part to help with the Googling and self-educating 🙂 And hopefully more new fans will start to take Amara at her word.

What is Kendall Jenner’s net worth? Model’s value explodes thanks to social media popularity