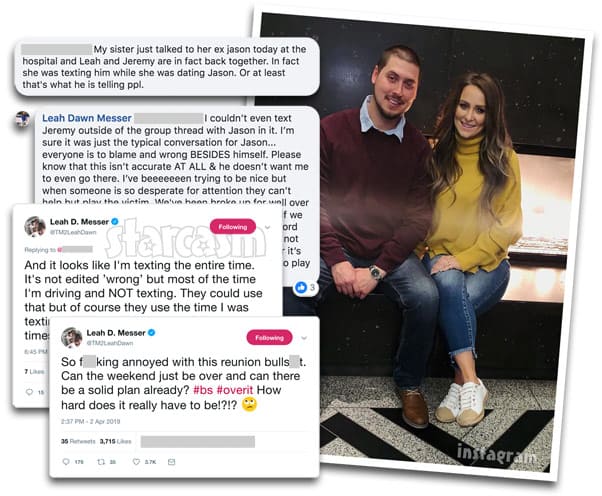 Teen Mom 2 star Leah Messer kept a pretty low profile on social media for quite a while, but that has all changed during this season of the show! Leah has been quite outspoken, especially on Twitter, as she has quipped back about a number of topics including a report that Jason is telling people she was texting Jeremy while they were together, the reunion production drama this weekend, her texting and driving on the show, her grammar, and even her recent outspokenness on social media!

ARE LEAH AND JEREMY BACK TOGETHER?

In case you missed it, Leah and her ex Jeremy Calvert have been more than a little chummy of late. In addition to exchanging borderline flirty messages and references online, the two posed for numerous photos together while in New York City for the Reunion taping over the weekend. Here are just a few examples:

Reunion ready, when your ex wife picks out your outfit…. @leahdawn92mtv #addieapproved

Leah’s co-star, and bona fide rebound proponent, Kail Lowry offered up her encouragement: “I meannnnn I wouldn’t be mad if y’all got back together ????”

Not many perks to @teenmom2 but I got to meet @KatTimpf and her bf, drink shots with @jcalvert505 and @TM2LeahDawn , and we had a solid night pic.twitter.com/rffMELCoaB

Despite all of the chumminess, neither Leah nor Jeremy have confirmed they are back together in any sort of official capacity.

WAS LEAH TEXTING JEREMY BEFORE SHE BROKE UP WITH JASON?

So, when did the chumminess start with Leah and Jeremy? One Facebook user claims that Jason is telling folks it began before he and Leah split — something Leah adamantly denies. “My sister just talked to her ex Jason today at the hospital and Leah and Jeremy are in fact back together,” the person wrote on a Teen Mom Facebook page. “In fact she was texting him while she was dating Jason. Or at least that’s what he is telling ppl.”

Normally, a random comment on Facebook wouldn’t merit a mention from us, but Leah took it seriously enough to respond on Twitter before tracking down the original post and responding more at length there.

“This doesn’t surprise me,” Leah tweeted in response to a screen cap of the comment. “Tag me where you saw this. TRUST ME: Jason doesn’t want me to go on record and set things straight. So the best thing he can do is keep his SMALL talk attention seeking behavior to himself! IF HE CAN……..”

Leah iterated her frustration and her restraint with her Facebook response:

I couldn’t even text Jeremy outside of the group thread with Jason in it. I’m sure it was just the typical conversation for Jason… everyone is to blame and wrong BESIDES himself. Please know that this isn’t accurate AT ALL & he doesn’t want me to even go there. I’ve beeeeeeen trying to be nice but when someone is so desperate for attention they can’t help but play the victim. We’ve been broke up for well over a month now. I’ve always got along with Jeremy and if we want to hang out, we will. I just wanted to set the record straight because it’s so far from the truth. I know it’s not your fault because it’s just what you heard… however it’s unfair for me not to be able to voice the truth trying to play nice.

Oh man, it sure sounds like Leah is biting her tongue on what really happened between her and Jason! Perhaps we will see a little of that on this season of Teen Mom 2? 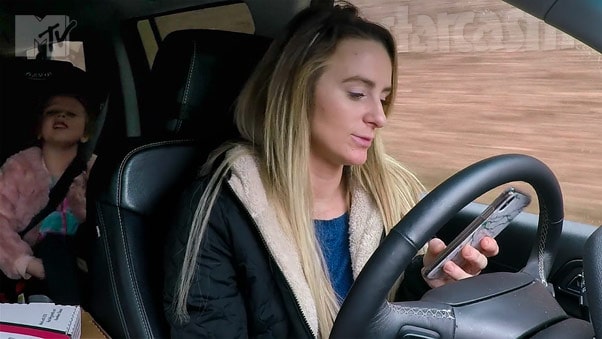 Leah took to Twitter to respond to a scene from this week’s episode in which she can clearly be seen texting and driving with all three of her daughters in the car. “Of course it would be edited to where it looks like I’m texting and driving the entire time,” she tweeted. “It’s a TV show guys…I’m NOT always texting and driving ??‍♀️ but I’m totally aware that I shouldn’t text and drive AT ALL. Xx ?”

Another Twitter user replied by asking: “How can that be edited it’s footage of u texting and driving?”

And it looks like I’m texting the entire time. It’s not edited ’wrong’ but most of the time I’m driving and NOT texting. They could use that but of course they use the time I was texting which could be some of the same times lol

Someone else suggested that Leah looked “high af” in the scene, but she was having none of that either. “Definitely not high ? maybe super effing exhausted. I had a lot going on around that time.”

This issue is nothing new for Leah. “What about texting and driving? That’s illegal in your state,” someone tweeted after a similar instance in 2016. “I don’t always text and drive,” Leah responded, “but [you’re] entitled to assume whatever you like?”

🙁 @MTV showed Leah texting and driving with her daughters in the car for the 3rd #TeenMom2 episode in a row pic.twitter.com/hNOhLn9CLW

ON THE REUNION DRAMA

There are numerous reports from the Teen Mom 2 Reunion filming in New York City over the weekend indicating that it was the most drama-free Reunion in years. Of course, that is in reference to the drama between the cast members. There was still quite a bit of drama, but it was all stemming from the measures producers had to take in order to keep the moms away from each other.

Here are Leah’s tweets and others’ responses from over the weekend:

LEAH: So f**king annoyed with this reunion bullsh*t. Can the weekend just be over and can there be a solid plan already? #bs #overit How hard does it really have to be!?!? ?

TWEET: Just a question not trying to be a smart *ss but why do yall complain when you’re making good money to just be filmed and y’all are the ones that signed up for all this ??‍♀️

LEAH: I’m not complaining… I just want a solid plan and to get it over with.

TWEET: She has a reason to complain when her co-stars act like asses and get pandered to, that’s complete bull shit

TWEET: Lots of ppl have to wait last minute to find out about work meetings. Be grateful you don’t work at Walmart and stop complaining

LEAH: It is last minute and I have a team that I have to give times as well ??

TWEET: Why are they asking for special accommodations? Don’t they all travel for other things. But all of a sudden… Sorry they’re making it hard for you.

LEAH: I’m just saying if what you wanted has been accommodated just get on with it and if not do whatever you have to do. Have a solid decision! It’s everyone’s schedule being messed with. It’s all crazy ?? nothing is the same anymore and it’s honestly sad.

RANDY HOUSKA: Remember when we used to get an itinerary with flights, rooms, and schedules about 3 weeks prior to reunion? I just got my flight schedule last night. Kinda tuff to schedule real life around them

TWEET: Leah, Randy runs a dental practice. This show is literally the only thing you do for money.

LEAH: Is that what you think? ? I’m here ready to do what I’m here to do when I need to do it. So doing it is NOT what I’m complaining about. ??

However, it seems that once everyone got on the same page, things went super smoothly. “In my opinion, the reunion this weekend was one of the best by far!” Leah later tweeted. “I just missed @KailLowry not being on stage with us. Still a great time, great weekend! ???”

LEAH ON HER GRAMMAR & BEING “MOUTHY” ONLINE 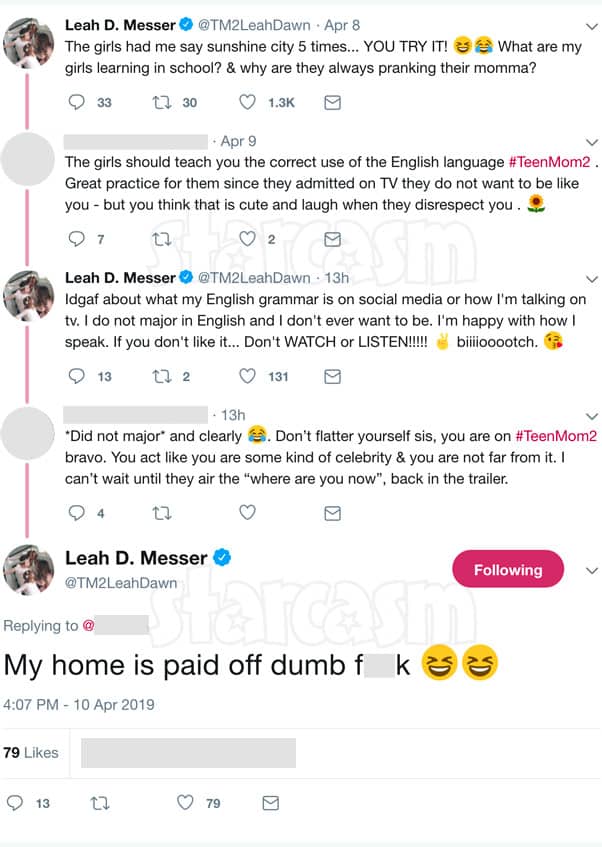 LEAH: Oooooohhhhh have I now? I wonder why. ? Maybe sometimes people just get sick of irrelevant internet trolls like yourself ?

I must admit, my Teen Mom Twitter feed has DEFINITELY been a lot more lively lately, thanks in part to Leah! ?

What do you think about Leah’s new attitude? And what about her new hair? I’m liking both! Oh, and I guess the biggest question: Do you think Leah and Jeremy should give their relationship another shot?