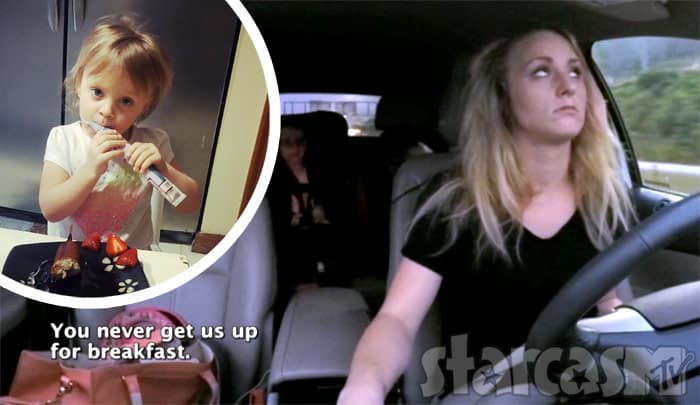 Monday night was the triumphant return of Teen Mom 2, but not everyone was thrilled with the episode. Show star Leah Messer was shown in a bad light — literally — as she struggled with getting her three daughters up very early in order to get the twins to school more than 45 minutes away. Since the episode aired, Leah has responded to the harsh criticism from fans of the show, and she puts a lot of the blame on MTV.

We have all of Leah’s reactions below, but first we will recap what happened on the show for those that missed it or need a refresher. In Leah’s opening scene, it is right around 6:30AM as she gets her daughters up for the trip to school. Ali looks in the refrigerator and laments the fact that Leah did not buy her any Lunchables. Later, sister Aleeah wants to pack a lunch, but Leah explains that it isn’t an option. “I didn’t have any bread like I thought I did,” Leah says.

Leah manages to get all of her girl in the vehicle and she appears to be extremely groggy as she begins the long drive before dawn. Making the situation worse, as far as fans’ reactions, was the fact that Leah appeared to be texting while driving: 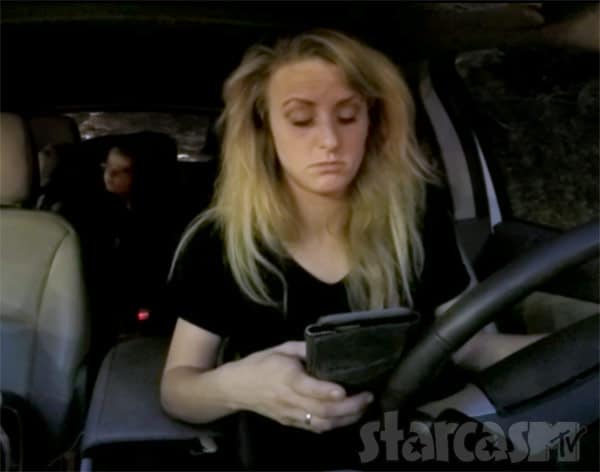 During the trip to school, Aleeah complained that Leah never made them breakfast like her dad Corey and step mom Miranda did. “I’m not daddy and Miranda, first of all,” responds Leah. “I’m not cooking breakfast when we already have to get up at five o’clock when you can eat breakfast at the school,” she adds.

UPDATE – An eagle-eyed Teen Mom 2 viewer pointed out that Leah was not only texting while driving, she was also smoking. To her credit, she did have the window cracked: 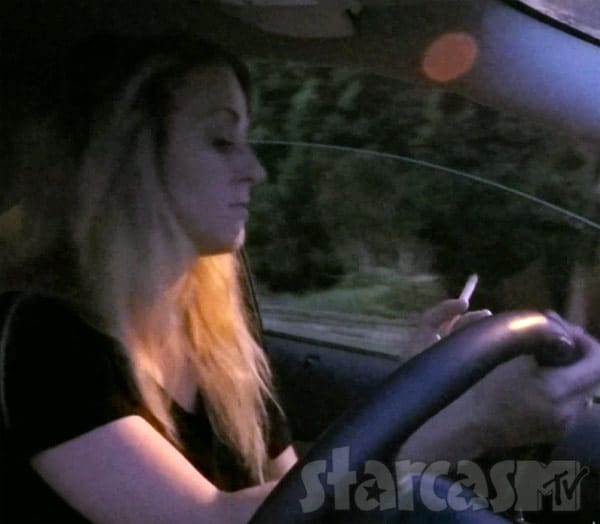 Later in the episode, Leah is seen having lunch with a friend to talk about her custody battle with Corey, and she has her youngest daughter, Addie, with her. While Leah and her friend are talking, MTV cameras show Addie looking as though she is eating straight from a raw sugar packet and then a Sweet & Low packet: 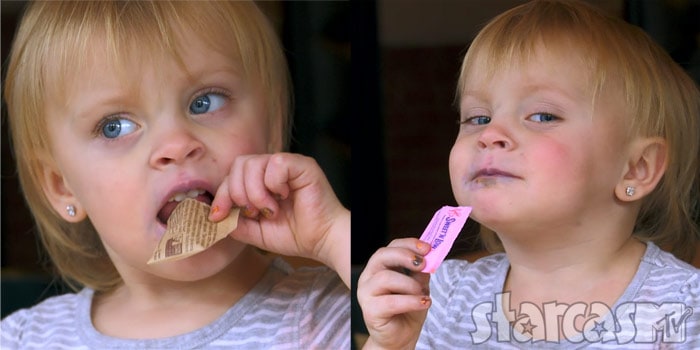 One other thing that drew criticism from fans is another scene featuring a car ride in which it appears that Ali and Aleeah are drinking Sprite: 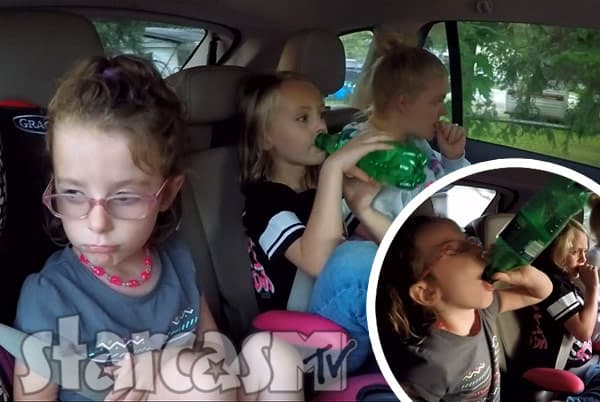 [Note: I rewatched the episode and despite what commenters have argued online, the bottle definitely wasn’t empty to start with.]

After the episode aired, Leah took to Twitter and Instagram to respond to all the criticism about her parenting prowess, including this photo of Addie eating a breakfast prepared by Leah without any sweetener packets in site: 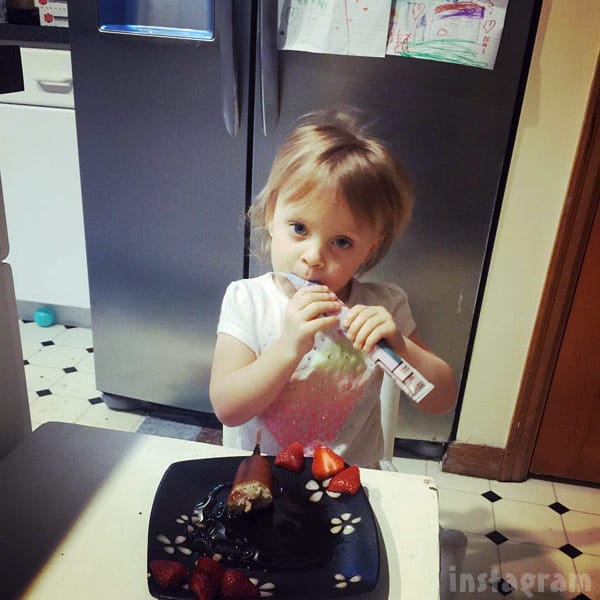 “Mommas baby wanted pancake and sausage on a stick, yogurt, and strawberries for breakfast!” wrote Leah. “She is so happy ?”

On Twitter, Leah responded to a number of comments:

LEAH: she was sneaking it while I was filming and MTV caught her. Lol

TWEETER: the sugar packets were empty! And so was the pop bottle.

LEAH: my children NEVER drink soda and neither do I. ?

IN TOUCH: #TeenMom2 star Leah Messer refuses to feed her children — find out why: http://bit.ly/1px4W0d

LEAH: Noo Grace was being a drama queen that morning. They eat as soon as they get to school. Nice try @intouchweekly

TWEETER: How do u react to Grace when she says you put everything else in front of them?

LEAH: she never says that ! She actually says the opposite Grace has a huge personality you’ll see later in the show !

TWEETER: and all of y’all act like your kids have never said anything like that just because there mad

LEAH: At least SOMEONE can be real and honest! lol. FakeAssPpl!!

TWEETER: No matter what you do, right or wrong, people are always going to talk. Keep your head up Leah!

LEAH: very true! Misery loves company! I am in such a amazing place! I won’t let it get me down ?

TWEETER: what about texting and driving? That’s illegal in your state. You’ve clearly proven yourself to not be mother of the year.

LEAH: I don’t always text and drive, but your entitled to assume whatever you like ?

TWEETER: Her kids eat at school just like everyone else. She didn’t want to wake the kids up at 4 am to eat breakfast. ??

LEAH: EXACTLY ! 5:00 is already early enough for two 5 year olds, and I guess no one is ever out of bread? lol

TWEETER: who are these people? You don’t have to answer to anyone! Your a mum who is doing her best and loves her babies!Head Up high ?

LEAH: your right. It does hurt my feelings tho. My girls scream to be with me because I AM a GREAT MOM!

LEAH: I can say soo many things but It’s better left unsaid. lol God has my back! ?

TWEETER: There is no amount of money that could make me continue filming after the way people bash @TM2LeahDawn … Idk why she does it … #teamleah

LEAH: My point exactly. It’s so sad how the person behind the editing can even live a happy life by editing to manipulate the audience watching. It makes me feel like my story just isn’t enough. I DID hit rock bottom but I come out of it and I was willing to air it ALL because if just ONE person watched and reached out for HELP even when they feel so ALONE that’s all I cared about because I could NEVER imagine ANYONE feeling the pain, hurt, depression AND anxiety that I WAS suffering from. It would break my heart! I wanted to bring awareness and HELP others and if MTV couldn’t share that then I will do it on my own the way God wants me to!!!! As hard as it was to go through. I know there’s reasoning why I went through it. AND It hurts to feel BETRAYED by the ones I THOUGHT I could trust with my story. It goes to show you how “THE ENTERTAINMENT WORLD” really is and I guess everyone will see where I REALLY am starting EPISODE 4. #SUCHASHAME When others that is suffering could ALREADY be reaching out for help it just BREAKS MY HEART!!! It’s NOT okay but I KNOW that I am NOW in such a AMAZING place and I LOVE YOU ALL! && I hope to continue to share my story but I REFUSE to allow it to be twisted for the benefit of a NETWORK!

TWEETER: Leah i just want to tell you keep up the good work. No Mom or person is perfect in this world. Kids first!!

LEAH: im farrrr from perfect but I strive to be the best version of myself EVERYDAY!

Unfortunately for Leah, it looks as though things will continue to break bad for her next week as Corey wins primary custody of the twins. Click here to watch the emotional preview clip!